Humidity’s bulge (its “indiscriminate bolus”) is lodged in the hereabouts, vicinity become modality. Desultory reading, the restlessness of the glut, books pitched here and there, spine down in the damp. Thinking of Barthes talking (in the 1979 Sollers écrivain) about Philippe Sollers’s vacillatory pronouns in Drame:

The very rhetoric involved in this project reveals its arbitrary character (rhetoric aims at overcoming the difficulty of speaking sincerely) . . . The classical tendency is for the author—‘I’—to decide to talk either about himself or about somebody else—‘he.’ Here, on the contrary, we have an impersonal voice. It sends out, like an arrow which is shot from the bow only to be constantly taken back, an ‘I’ whose only person, whose only individuality lies in the hand of flesh and blood which is doing the writing.

A sort of slant way of defining Barthes’s own term “writerly” (scriptible): that impersonal hand makes its own ‘I’ plausibly deniable, a drama “not recounted (reported) in the book, but constituted . . . by the very act of the story.” (One thinks of Escher’s 1948 lithograph “Drawing Hands”: the real quashed by artifice of its only reliable emergence.) Or see Sollers’s own note to the reader in Drame, quoted by Barthes: “If there is a story, it tells basically how a language (a syntax) goes in quest of itself, invents itself, makes itself at one and the same time into a machine for emitting and receiving signals.” Williams’d add: “small (or large).”* Barthes: 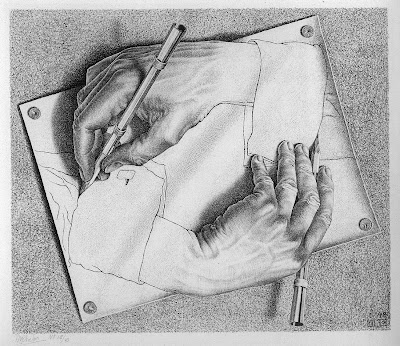 One thinks of Ashbery’s chaos of “slithery” pronouns. Too, one thinks of Eliot’s self-surrendering “continual extinction of personality,” that “depersonalization” and catalysis in “Tradition and the Individual Talent” (1919): “It is in this depersonalization that art may be said to approach the condition of science. I shall, therefore, invite you to consider, as a suggestive analogy, the action which takes place when a bit of finely filiated platinum is introduced into a chamber containing oxygen and sulphur dioxide.” (Exceedingly coy remark, and odd choice, that “finely filiated platinum” for a metaphorical catalyst, with filiated’s sense of high lineage hovering thereabout, ascribing a kind of paternity nevertheless to self-extinct proceedings? Boswell says in The Life of Johnson: “The filiation of a literary performance is difficult of proof; seldom is there any witness present at its birth.”) What Barthes / Sollers push at (for) is a kind of “impersonal” body wholly (impossibly) untainted by the literary doxa (as opposed to Eliot’s sense of the writer as medium / vessel for a channeling of some new synthesis of that doxa, called “tradition”). Barthes:

The total body is impersonal. Identity is like a bird of prey hovering far, far above the sleep in which we peacefully go about leading our real life, living our true story. When we wake up, the bird plunges down upon us, and it is during its descent, before it has touched us, that we must move faster that it does and speak.

(O’Hara’s “Poetry”: “The only way to be quiet / is to be quick, so I scare / you clumsily or surprise / you with a stab.”) One almost imagines Barthes is addressing Eliot in “Drama, Poem, Novel” (though I suspect the “pure psychic automatism” of Breton and Co. is morely likely). Regarding Sollers’s “genuine spontaneity, which precedes every attitude and every choice”—a language “not linked to a disorder of the words but, on the contrary, to a protocol without interstices: ‘There would take place such an overloading of intentions, such a practical complexity, that far from being impoverished or made tiresome the feeling of being alive would be multiplied at its source’”—Barthes writes:

The ‘spontaneity’ which people normally talk to us about is the height of convention. It is that reified language which we find ready-made within ourselves, immediately at our disposal, when we do in fact want to speak ‘spontaneously.’ The spontaneity which Sollers is trying to achieve here is an infinitely more difficult concept. It is a fundamental criticism of signs, an almost utopian . . . quest for an a-language, a fully corporeal one, fully alive, a prelapsarian space from which stereotypes, those constituent elements of all psychology and all ‘spontaneity,’ have been expelled. . . . This practice does not consist in paying no attention to language (an excellent way of ensuring that it comes galloping back, in its most outworn forms), but in catching it unawares—or . . . in listening to its precarious suspension.

That imperturbable drive “at” the liminal markers of non-sens as at an originary non-lieu, (I think of Pound, presumably writing to Harriet Monroe, saying: “The continuation can be called Poetry, Second Series, or new series, if that hackneyed term is still big heap mumbo on the lake shore”—and wonder about my own “big heap mumbo” here, and my semi-Tourette’s need and desire to spout incafardables . . .) Sollers: “. . . to brush against the limit inside oneself; the gesture, the word that nobody would now be able to understand; that he would not understand either, but of which he would at least be the insoluble origin.” It’s a long way to the social shindig at the corral along the road.

*Too, Williams’s lines in The Wedge (1944)—“Prose may carry a load of ill-defined matter like a ship. But poetry is the machine which drives it, pruned to a perfect economy. As in all machines its movement is intrinsic, undulant, a physical more than a literary character. In a poem this movement is distinguished in each case by the character of the speech from which it arises. Therefore, each speech having its own character, the poetry it engenders will be peculiar to that speech also in its own form.” Irrespective of that sense of “movement . . . intrinsic,” Williams’s rootedness in the particulars of speech and the local runs counter to one thrust of the “era”—that of syntactical breakage, the assaying of sense-limits, &c. Though I say that with feigned conviction (a way of catching a thing unaware): “If anything of moment results—so much the better.” 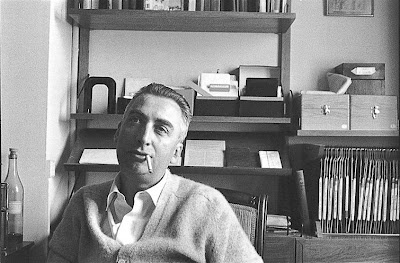