. . . luck, chance, and talent are of no avail, and the man who wishes to wrest something from Destiny must venture into that perilous margin-country where the norms of Society count for nothing and the demands and guarantees of the group are no longer valid. He must travel to where the police have no sway, to the limits of physical resistance and the far point of physical and moral suffering. Once in this unpredictable borderland a man may vanish, never to return; or he may acquire for himself, from among the immense repertory of unexploited forces which surrounds any well-regulated society, some personal provision of power; and when this happens an otherwise inflexible social order may be cancelled in favour of the man who has risked everything . . . Society as a whole teaches its members that their only hope of salvation, within the established social order, lies in an absurd, and despairing attempt to get free of that order.

Used for epigraph at the beginning of Part Two of Thomas McGrath’s Letter to an Imaginary Friend. (Another quotes Fats Waller’s “The Joint Is Jumpin’”—“Don’t give your right name! No, no, no!” The solidarity and defiance of Waller’s line, one suspects, is nowhere less present than in its purely narcissistic echo in Amy Winehouse’s “Rehab”: “They tried to make me go to rehab / I said no, no, no.”) Why McGrath? In my bully’d-by-an-emphatic-restlessness-and-colossal-loss-of-focus storming of the books yesterday, I found myself reading around in a kind of biography of Alan Swallow (The Imprint of Alan Swallow). Who knew McGrath’d been one of the early students of Robert Penn Warren and Cleanth Brooks at the point the Agrarian stalwarts were putting together Understanding Poetry? Swallow, a populist of the political left out of the Wyoming scrub, there in Baton Rouge, too, published McGrath’s first work, First Manifesto (1940). “The Manifesto was the first of a series of Swallow Pamphlets and was priced at twenty-five cents in deference to ‘the notion, gained from reading the Haldeman-Julius materials, that good literature ought to be put out at a very inexpensive price.” (Emanuel Haldeman-Julius, b. 1889 in Philadelphia, son of a bookbinder, published, in Girard, Kansas—he’d purchased a socialist weekly newspaper called the Appeal to Reason there, along with its presses and subscriber lists—among other things, the Little Blue Books, a series of small (roughly the size of a workingman’s shirt pocket), cheaply printed, staple-bound books, priced (in 1923) at five cents apiece. Titles running a gamut: classics of Western literature to political tracts to “the Rational Sex Series.” Apparently, in the post-WWII years J. Edgar Hoover’s FBI put Haldeman-Julius on its enemies list, largely because of the inclusion of Little Blue Book titles about socialism, atheism, and sexuality.) Story of Alan Swallow and wife Mae driving down to Baton Rouge (a sort of runner-up nod by Robert Penn Warren to Swallow’s poems—“decisively ahead of the field”—entered in a College Verse competition, led to Swallow’s enrollment in the recently-Governor Huey Long pumped-up LSU) and stopping in Girard to see the Haldeman-Julius plant and purchase cut-rate a whole box of Little Blue Book titles: “As they drove on toward Louisiana, Mae took each one out of the box and read the title. If Alan did not have it, they kept it. If he did, they ‘threw it out the window for some farmer to pick up and read.’” (Reading a book like The Imprint of Alan Swallow a thing unconcerned with the usual lineages and feints and “slant histories” of the self-appointed, one encounters odd writers apparently unnoisily consumed. Here’s one Carol Ely Harper, editor of Experiment Press and poetry journal in Seattle, with opening lines out of “Car Hits Dog”:

A cursory look around suggests nobody much noted Carol Ely Harper (I’d wager that tired old argument that the U.S. poetry world in the aftermath of WWII fit in a couple of busses driving down a plank road and keeping at hollering distance, is largely bunk, the count plunges precipitously is all . . .), though Robert Creeley (in the June 1961 Poetry) manages to fault her editing (of the Experiment Theatre Anthology #1) for both “purpose” (“Purpose itself, of course, may well be ridiculous, implying relationships where none may exist—so that no tunnels to China succeed. The Experiment Theatre Anthology fails partly in this sense”) and “complacency.” A mean feat, though one that is likely just: the purposed complacency of the lines out of “Car Hits Dog” recalls precisely that of “our” Flarfists, all elbow-nudge-in-the-ribs hilarity, as if one could be earnest about one’s mania. I somehow ended my reading (laughing crazily mid-river, the raft overrun by monkeys) bemoaning McGrath’s loss (is McGrath lost?) Why Dorn and not McGrath? (Is Dorn lost?) Here, out of an interview conducted by Reginald Gibbons, questions of “program” (purpose) and its lack:

McGrath: As to how come the little poems come along, or poems that don’t seem to have any program insofar as I have a program for the total poetry of Thomas McGrath, or anything of that sort—I guess I have to say it metaphorically: there must be backwaters and eddies and whatever in the imagination. Things that I haven’t been aware of, but they’ve been going around in my imagination, in my head—you know there isn’t a decent terminology for this, as far as that goes, “imagination” is a pretty old word, now, and whatever is going on there, there’s a lot of little side pockets and thickets and this, that and the other.

Gibbons: What “strategic” value do those poems have?

McGrath: It doesn’t matter to me if they don’t have any! [Laughs.] No! I’ve not got a program in which I say, “this is tactical, I’ll plug that in here; this is strategic.” No! Shit, I want to take everything that comes! I’m very greedy in that way. This is “Welcome,” which I wrote for Etheridge Knight:

One and one are two,
Two and two are four,
Pipsissewa and sassafras
Grow at my front door.

Now that’s not especially tactical or strategic or whatever, but I like it. Because I like pipsissewa and sassafras and all the other things that grow. And it seems to me that one of the things that anybody should do—it seems to me so obvious—is that we ought to honor ourselves and the natural world and our fellows in every goddamn way we can! Roethke said something, programmatically, once, which I agree with. Hugh MacDiarmid said it also, in a somewhat different way I can’t remember. Maybe I’m mixing it up a little bit, but in effect Roethke said, “Poems—or poetry—ought to show forth the whole man.” What he meant, I think, was—and I believe this absolutely—I think you could write a good poem about taking a shit! Why not? Or any other thing. And that’s why I like to write about food and flowers and all these odds and ends.

Gibbons: That means you don’t entirely accept the Brechtian dictum about the raindrops being an unsuitable subject.

McGrath: No, I don’t, I don’t, I don’t. Even when writing a poem about a flower seems almost treason or almost a crime. Well, I’ll tell you, given certain situations and times, I would believe that. And of course Brecht was coming out of a fascist state, and I understand that perfectly. And I honor him for it. But maybe what I’m feeling is different—and I’m sure there are people who would tell me, good honest revolutionaries, a little stupid maybe, in my opinion [laughs], but nevertheless, good ones, who would say, “You don’t really have that right.”
But I think if I take that right away from me, from myself, I’ll take away a lot of other things. In a way, my imagination is like a meadow. If you don’t let the meadow go its own way, you know, if you start plowing up bits and pieces of it, or restricting yourself to the use of only a part of it, the other part will suffer too, I think. Not enough room for pollination, or whatever. So, while I have this theory about revolutionary poetry, the revolution—except at the place where you’re at the barricades, and it’s a matter of total life and death, and maybe only right at your death—cannot assume everything, take everything. Because at times other than that, no matter how much of a revolutionary, you’re also a human being!

Out of the Reginald Gibbons and Terrence Des Pres-edited Thomas McGrath: Life and the Poem. Interview conducted in 1987. 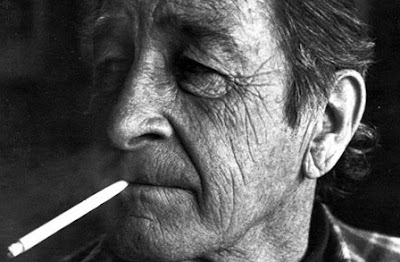