The steroidally abject cyclist’s macadam-ruin’d sprint and subsequent idiotic spill’s what I ought to talk about, boner of the century. My fey lapidary spiel trumped by the aimless onslaught of a squadron of personal frumps, unsurpassably sentient, mitigants and sufferers, too, of la belle misericordia, and as liable to upend a winner’s chair with a hobnail’d boot as to be seat’d in it. I love that kind of thing: bluely blown in through the slot like a pneumatique, its sibilant syllables excepted. Illicitly released up out of complicity, one is. Is it necessary to adumbrate my correspondence with the Piltdown man? The story got relay’d everywhere: how the smart-ass’d I, attempting some kind of museum level Erfüllung und totaler Erschöpfung, got tit for tat. Call it entelechy, call it screwed, call it the tyrannous dangers of titivating in this prissy and untransferable world.

The gawky woman in a yellow shift, all angularly hipped, straddling the double yellow lines for a photographer, who’s low, shooting up. (Something along the way, bicycling in.) A little “jittery and haphazard” today—words I stole out of Anselm Berrigan’s recent yak about form (and baseball), how to juggle “being open to combinations that aren’t terribly pre-formed”—and the resultant poem as “formal attempt to make a big mess and have that actually be the accurate depiction of what it was like to be in time during that period”—against, probably putting words in Berrigan’s mouth, some unheeded atavistic need for the solace and regimen of structure: “I got interested in sentences because I needed a more stable structure in order to get my lines grounded again. I found myself in a place where it was hard to hold anything together.” Isn’t that the perennial item, interminably tabled and endlessly reintroduced off the agenda of form? Think of the short lyric’s bulletry, the narrowness of its apparent direct hit at close range versus the longer serial work’s shotgun scattershot, and subsequently broader, and plausibly compendious, mess. Is it only because I recently re-read A. R. Ammons’s Paris Review remarks, too, that I see Berrigan and Ammons kin, both seeking (in Ammons’s words) “to manage the multifariousness of things and the unity of things.” Ammons (talking about the dilemma in terms of the problem of the one and the many):

What the pre-Socratics bandy’d about (see Heraclitus’s “From out of all the many particulars comes oneness, and out of oneness come all the many particulars”) exacerbated by the ever-expanding gluts partout (of info, of consumerist frenzy, &c.) Ammons—yanking, I suspect, the interlocutor’s leg, with a kind of Zen (“contentless unity”) Heraclitan (see “Everything flows, nothing stands still”) spiel (I detect a self-deprecatory josh and taunt in that end malarkey about lingo, salience versus suasion):

I saw a continuous movement between the highest aspects of unity and the multiplicity of things, and it seemed to function so beautifully that I felt I could turn to any subject matter and know how to deal with it. I would know that there would be isolated facts and perceptions, that it would be possible to arrange them into propositions, and that these propositions could be included under a higher category of things—so that at some point there might be an almost contentless unity at the top of that sort of hierarchy. I feel that you don’t have to know everything to be a master of knowing, but you learn these procedures and then you can turn them toward any subject matter and they come out about the same. I don’t know when I saw for myself the mechanism of how it worked for me. Perhaps it was when I stopped using the word salient so much and began to use the word suasion.

Lingo. Is it pertinent to quote a couple of paragraphs out of Robert Duncan’s high-hysterick’d quarrel with Robin Blaser regarding the latter’s versions of Gérard de Nerval’s Les Chimères (in the 1967 Duncan Audit)? Duncan faults Blaser’s desire for authenticity (an expression of what is one’s “own”), and puts himself amongst those for whom “the poem is thought of as a process of participation in a reality larger than my own—a community of meanings and forms in which my work would be at once derivative and creative.” Duncan:

I have taken Blake’s “The authors are in eternity” as my guide. Blaser as an artist aims at signature or style; I aim at meaning, both in form and in content. But meaning here, for me, is not in what I mean, but in what the language means. I do not express meanings that are my own, I work in meanings which I receive or find in research.

In extreme cases of the artist seeking authenticity—Jack Spicer’s Language comes to mind—the sense of the impossibility of communication takes over: communal meanings are seen as a static, drowning out the idiosyncratic truth of things. A Laura Riding will come to feel that all poets write poetry for reasons improper to poetry.

What I experience on the other hand in my extreme persuasion to the reality of the world created by the written and read word, where the meaning in language has its definitions in the community of meanings from which I derive whatever meanings I can, is at time[s] a feeling that there is no real me, only the process of derivations in which I have my existence.

Duncan’s oddly phrased “persuasion to the reality of the world” echoing Ammons’s “suasion,” two urgings toward, two recommendings, two advisements. Versus Blaser’s salience (“jetting forth, leaping up”)? Funnily enough, I’d intended to begin with a photograph by Bruce Nauman, the 1966 “Self-Portrait as a Fountain.” I’d look’d at it in Thierry de Duve’s Kant after Duchamp (1996) and, in lieu of seeing it as homage (of sorts) to R. Mutt’s 1917 “Fountain,” I could think only of John Belushi playing John “Bluto” Blutarsky as zit in Animal House (1978). Blake’s authors may well be “in eternity” but the danger of having one’s existence reside only in “the process of derivations” is evident. Think of a xerox of a xerox. Or a Think of a xerox of a xerox of a xerox. Hearsay is that Marx tells us “Hegel remarks somewhere that all great world-historic facts and personages appear, so to speak, twice.” And adds: “He forgot to add: the first time as tragedy, the second time as farce.” What if it turns out all personages appear—or art arrives—, so to speak, endlessly. If farce succeeds tragedy, what succeeds farce, and the farce of a farce? 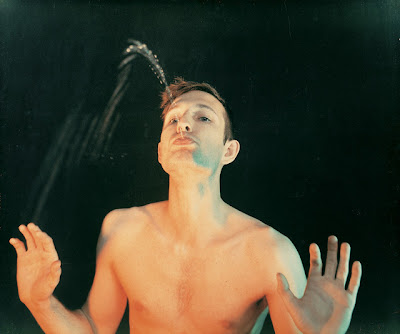 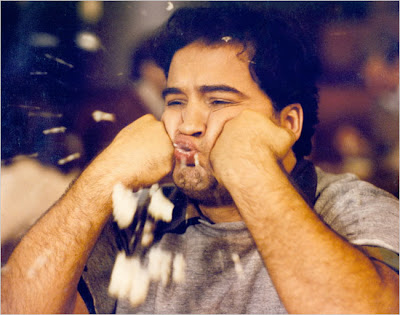