Reading Patricia Albers’s Joan Mitchell: Lady Painter (Knopf, 2011), largely—I admit it—for any gleanings O’Haraesque (who’d forget the mock Apollinaire’s “Zone” sigh of “At last you are tired of being single . . .” in “Poem Read at Joan Mitchell’s” with its post-fatidic outburst of “It’s so / original, hydrogenic, anthropomorphic, fiscal, post-anti-esthetic, bland, unpicturesque and WilliamCarlosWilliamsian!”) Astounded I am to learn (why am I routinely shocked by wealth—yea, deplorable, inconceivable wealth—underpinning the lives of innumerable American artists and poets; why, in my gosh-darn’d Poindexter of an imaginary, do I persist in thinking “we” all go complaisantly unbuttress’d up through the scant economic clouds, or, plus souvent, down into the poor dirt unregimented . . . didn’t I, just a week or so back, see a certain Drummond “Drum” Busch Hadley, b. 1938, hanging off one of the lower limbs of the Anheuser Busch tree, and didn’t I shout out like a caballero, “Goddamn and eureka, too, isn’t that Ron Silliman’s own prefer’d Zen Cowboy? Is the unsung origin and dodgy prereq for such an inane mash-up simply monstrous wealth?” I did.) Astounded, then, comme on disait, to find out that Joan Mitchell’s appendage to both a (rather upstanding) lieutenant of Andrew Carnegie, one Charles Louis Strobel, inventor of the Z-bar—“a structural steel beam whose cross-section forms a right-angled Z”—and constructor of Chicago bridges, and one Henrietta Baxter (daughter of a man, “Rye” Baxter, who—prior to the Great Fire of 1871—’d “reaped a $100,000 fortune” through playing the grain futures markets and “outflanking” all rivals in rye): the details, tawdry or not, less to the point than the way wealth itself allows for continual exhortatory (if not exploratory) expenditures with no hint of sucked up gut or containment required. A kind of catch pan (under a steamroller). It used to be called “slumming.”

Turns out Joan Mitchell’s mother (poet Marion Strobel, who’d had to coach James Herbert Mitchell, fourteen years senior, in the writing of love letters—“Please, please, please consult what Edna Ferber is ‘pleased to call’ your heart . . . and if it has a syncopated diastole, put it on paper in what I would consider extravagant language. (I know you won’t do this, you careful old person whom I love entirely too much)”) “took the unpaid position of associate editor” of Poetry under Harriet Monroe in April 1920, following the departure of Alice Corbin Henderson. (Albers, aptly: “By then Poetry had achieved national and international stature, although the critical consensus is that it had already left its early brilliance behind, due in part to Monroe’s espousal of too much easy-listening rhyme from the Corn Belt.” Wider recognition of which would undoubtedly ’ve saved “us” the current spectacle of the doddering institution trying continually to re-make itself—mostly by brute expenditure—into pertinence.) So be it. There’s a lovely line in Albers suggesting that “‘Aunt Harriet’s’ wobbly false teeth always made young Joan nervous.” Albers reports, too, how Marion Strobel, during an April 1919 visit to Chicago by William Carlos Williams (who gave a talk at the Press Club that began: “The poet goes up and down continually empty-handed. To tear down, to destroy life’s lies, to keep the senses bare, to attack; to attack for the nakedness he achieves, the sense of an eternal beginning and end—that is his job, in lieu of getting into the game on a fair footing”—printed under the title “Notes from a Talk on Poetry”* in the July 1919 Poetry)—how the two, Strobel and Williams, “plunged into an affair.” One result: Williams’s poem: “A Goodnight” (Albers suggests it “batters the ear with the tonic vitality of Lake Michigan” and “Lake Michigan spills through Williams’s line with a vigor and variousness that parallel those of a Mitchell painting”—perhaps apt, though rather a-chronological):

Go to sleep—though of course you will not—
to tideless waves thundering slantwise against
strong embankments, rattle and swish of spray
dashed thirty feet high, caught by the lake wind,
scattered and strewn broadcast in over the steady
car rails! Sleep, sleep! Gulls’ cries in a wind-gust
broken by the wind ; calculating wings set above
the field of waves breaking.
Go to sleep to the lunge between foam-crests,
refuse churned in the recoil. Food! Food!
Offal! Offal! that holds them in the air, wave-white
for the one purpose, feather upon feather, the wild
chill in their eyes, the hoarseness in their voices—
sleep, sleep . . .

Out of Williams’s liaison with Strobel, too, comes Williams’s “Spirit of ’76”—somewhat oddly reprinted in the Collected Poems still cupped in its context (in the June 1920 Poetry it is printed under “Correspondence”):

Dear Miss Monroe: Provided you will allow me to use small letters at the beginning of my lines, I submit the following excellent American poem to you for publication in your paying magazine:

This, as you will at once recognize, is an excellent poem and very American. I sincerely hope that no prehistoric prosodic rules will bar it from publication. Yours,
W. C. Williams

The bridge makers Strobels both. Turns out Joan Mitchell’s connection to Poetry through Marion Strobel resulted, too, in “a modest place in the magazine’s annals as the second-youngest writer ever published” (one idly wonders, the way one might wonder, say, at the size of clown Emmett Kelly’s shoes, who the “first-youngest” is). Mitchell’s “Autumn”—

The rusty leaves crunch and crackle,
Blue haze hangs from the dimmed sky,
The fields are matted with sun-tanned stalks—
Wind rushes by.

The last red berries hang from the thorn-tree
The last red leaves fall to the ground.
Bleakness, through the trees and bushes,
Comes without sound.

—was published in the December 1935 Poetry, prompted by Strobel’s jaunty note to Harriet Monroe (“My infant Joan (aged ten) wrote this last night and I—with five year’s experience as associate editor of THE magazine of verse—thought it good, in fact I still do! WHAT the hell—it IS good—and if you don’t think so, Lady, lady, I’ll be ready to cut you into small quarters and feed you to the Bandy-Bandy.”) Ah, the presumptuous rich. Of Strobel, Albers notes that as “a major player in the magazine’s byzantine politics, she sought funding so zealously that she may deserve credit for saving Poetry when, its chances of survival approximately nil during the Depression, Charles Louis Strobel’s former employer, the Carnegie Corporation, materialized as fairy godmother, bestowing three major grants.” She notes, too, how Strobel’s “contributions to this originally proto-feminist adventure went underrecognized, including in the Modern Poetry Association’s official history, which fails to mention how, when the magazine’s chief, George Dillon, was drafted in World War II, Strobel stepped in as coeditor, a literary Rosie the Riveter.” Albers’s “official history” is the Joseph Parisi-penned Poetry: “An American Institution,” Founded in 1912 by Harriet Monroe (Modern Poetry Association, 1980).

* “Notes from a Talk on Poetry,” seemingly reprinted nowhere. Salient: “Any man who does not take his technique—which means saying what he means and not saying what he does not mean—with bitter seriousness, is a jackass. The sign of a poet’s unforgiving seriousness is his rebellious laughter, which he guards with immaculate craft. A dimming technique ensnares the senses; one must continually break down what oneself has accomplished. One must come out clean.” And: “Poets have no quarrel with anyone. Especially not with the ‘regular fellow.’ In tired moments we must envy him—the sport, the game guy. I see him laugh at life; I’ve seen him fling it aside for a glass of beer. I love these fellows—perhaps I wish I could be like them.” And: “Talk is servile that is set to inform . . . It is talk with the patina of whim upon it that makes action a bootlicker. The world of the senses lies unintelligible on all sides.” And: “What has Professor Doolittle, who during a lifetime studied the oscillations of the earth on its axis—Doolittle, the father of H. D.—what has he achieved, sitting till morning with his beard actually frozen to the eye-piece of his telescope in Upper Darby? He has achieved nothing save brotherhood with Villon, whose ink was frozen in the pot when he finished writing his Petit Testament. He has achieved an emotion! It is the search of that alone that kept him there. Without it nothing could have made him look into his lenses, no matter if they had chained his head to the eye-piece.” Etc. 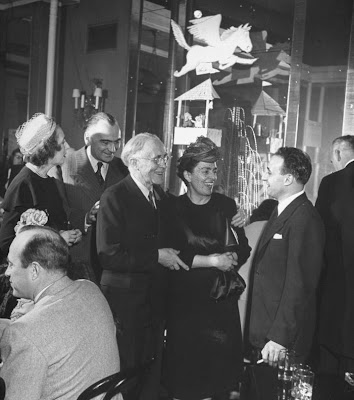 “Editor of Poetry, Marion Strobel, sharing a laugh with others at Pegasus party, January 1, 1947”
(Photograph by Wallace Kirkland)