Spat east by the carburetor’d longbow . . . Writ that way—in lieu of “I sped east in the aging black Vibe”—out of what? Some sense of language’s undeniable paucity of means (such a clownish furbelow necessarily wallops a secondary punch, too, of some kind of minor contempt for the medium itself . . .)? Some colossal indifference to all “plain speech” with its refusal to brook the consequence of its own “materiality”? Suspect self-amusement and -abuse? (Is there, I wonder off-handedly, anything distinct between the—routinely eschewed—“literary” and hankered after “materiality”? Isn’t the “literary” merely the circumstance of materiality ossified? Tennyson’s “The moan of doves in immemorial elms, / And murmuring of innumerable bees” thrusts forth avant tout the maw of its mattered wordedness: isn’t that what the “literary” is?)

Spat east by the carburetor’d longbow . . . Ending up “at” Mayville, looking down the length of Chautauqua Lake. A lather of musicality ensued. Writ that way, too, to avoid the brightly-lit personal, that particular American fever, its tawdry narcissism. Tanizaki (In Praise of Shadows): “In making for ourselves a place to live, we first spread a parasol to throw a shadow on the earth, and in the pale light of the shadow we put together a house.” Bumptious materiality provides a screen, its shrieking allows place “behind” for a quiet dwelling, nuanced, vicissitudinous, ever-fleeting. No nailed down particular or pre-packaged end. (Try nailing lather up against any implacably sturdy mur.)

Spat east by the carburetor’d longbow . . . Beginning of an epic. Is there some residue of the opening (“To Athena then . . .”) of Richard Fariña’s Been Down So Long It Looks Like Up to Me some lingual rattler there a-twitch in the greasy coils of the brain’s meat, recalling Fariña’s voyaging (“home to the glacier-gnawed gorges”) the “asphalt seas of the great wasted land”? (Every spiel behind the gasoline-slurping wheel makes one “loud with lies, big boots stomping, . . . awash with schemes.”) Is it frankly immodest to examine one’s own phrase with such doughty-handedness, no parasol sprung to shield against the impertinent sun of one’s looking?

Spat east by the carburetor’d longbow . . . And something I noted whilst reading (rather beleagueredly) “there,” gulled by the sagacity of the accidental (busy lining up the gulls), remarks by Horace Walpole (in a letter to the lovely-named Lady Craven) concerning the French language:

German, I am told . . . is a fine language; and I can easily believe that any tongue (not excepting our old barbarous Saxon, which . . . I abhor,) is more harmonious than French. It was a curious absurdity, therefore, to adopt Europe’s most unpoetic language, the most barren and the most clogged with difficulties. I have heard Russian and Polish sung, and both sounded musical—but to abandon one’s own tongue and not adopt Italian, which is even sweeter and softer and more copious than Latin, was a want of taste that I should think could not be applauded even by a Frenchman born in Provence. But what a language is French, which measures verses by feet never pronounced, as is the case wherever the mute e is found! What poverty of various sounds for rhyme, when, lest similar cadences should too often occur, their mechanic bards are obliged to marry masculine and feminine terminations that alternate as regularly as the black and white squares on a chessboard! Nay, will you believe me, Madam? Yes, you will; for you may convince your own eyes that a scene of Zaïre begins with three of the most nasal adverbs that ever snorted together in a breath? Enfin, donc, désormais, are the culprits in question.

Quoted in Marc Fumaroli’s When the World Spoke French (NYRB, 2011), translated by Richard Howard. How serendipitous to find, too, that Horace Walpole himself coined (out of the Persian fairy tale “The Three Princes of Serendip”—“Serendip” being the Persian name for Sri Lanka) the word “serendipity” in a letter to Horace Mann (28 January 1754). Donc, with the usual maladjustments evident in the whine of the high idle, le fin. 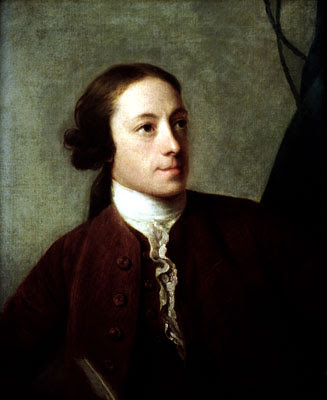