Class war fought with cultural markers chez Manchette. Martin Terrier: working stiff and hired killer, a job he’d accept’d in order to amass money enough to woo and marry the well-heel’d and flighty Anne Freux (“He said he was embarrassed at his humble origins, she was indignant . . . She said that she found Martin much more colorful than the others, and she said that it was precisely because of his social background and because the others were spoiled children, but not him—he was acquainted with real-life problems, he worked in the summer instead of going on vacation, he had to struggle to elevate himself, and all that, she said finally, made him deeper and more mature.”) Félix Schrader: marry’d to Anne Freux at the point Martin Terrier returns (Anne Freux’d “promised to wait ten years for him” though, too, the “elder Freux”—following a dinner whereat Terrier’d “mishandled the silverware” and become “voluble at the end of the meal, and his vocabulary deteriorated”—Freux père’d made it plain that Anne’d “marry a man from her milieu” and’d “ordered Martin not to see his daughter again and sent the adolescent out by the service stairs”):

The two men were looking attentively at each other. Félix was smiling; Terrier was not. Near the low table with its cane top was one more armchair, an empty one. Anne came back from inside the house with a silver cocktail shaker and sat down in the chair. She was wearing a thick loose sweeter, corduroy trousers, and red boots. She refilled her husband’s glass, then served herself. She glanced at Terrier, then looked down at the ground.
“We regularly come here because there’s nothing to do in Nauzac,” declared Félix. “What a hole! Two photography exhibitions per year, domino tournaments, things like that. An undubbed foreign film the first Monday of every month, at midnight—you get the idea. Have you seen the latest Altman?”
“What?” said Terrier.
“The latest Altman. Robert Altman.”
“He’s a film director,” Anne explained. She was looking up now; the sky was turning darker than the sea; it was twilight.
“What do you think of Régis Debray’s position on the media and intellectuals?” asked Félix, giving Terrier a mean look. “What do you think of the new French crime novel? And do you think that jazz can still progress? Personally, I have my doubts when I see Archie Shepp practically return to bebop if not to Ben Webster, or when I see a guy like Anthony Braxton hailing Lee Konitz, or when I see what’s become of guys who once showed such promise, like Marion Brown or, more in our line, Chico Freeman. Between meaninglessness and suffering, I prefer bacon, as the Auvergnats say. No, seriously, it’s frivolity on one side and boredom on the other, and I say fuck it. Of course, I’m well aware that these are aspects of the same crisis. Don’t you agree?”
Félix noisily caught his breath. Terrier was frowning.
“I don’t know,” said Terrier.
“Stop bullshitting, Félix,” Anne murmured distractedly.
“So what do you like?” Félix mockingly asked Terrier. He glanced at Anne and looked back at Terrier, who was perplexed. “In music, for example.”
Terrier shrugged. Félix brought his glass to his lips and emptied it at one go.
“Maria Callas,” said Terrier.

Whereat Félix is rendered speechless by a choking fit. The blasé self-certainty of the nouveau bien-pensant (a breed one encounters routinely in the post-avant “world”). Orthodoxy that knows not its own name. That, and the utter cultural disconnect between classes. Félix’s tough-guy diagnosis (“it’s frivolity on one side and boredom on the other, and I say fuck it”): platitudinous, rote, banal, bereft of authenticity. Contra: Callas, La Divina.

Of high pertinence. Roland Barthes’s note (out of “Dialogue” in the 1979 Sollers Ecrivain, translated by Philip Thody) that insists we must needs “conceive literature not as a series of tactical moods (‘winning’ with a book) but more eschatologically.” Whereat Barthes’s interlocutor demands: “And what does ‘eschatological’ mean?” Barthes:

“It’s what happens when the thought (or the desire) of a particular goal goes beyond the present moment, beyond immediate calculations. It refers you to the idea of a much more distant goal than a tactical or a strategic one: a goal that the writer perceives in his social solitude. For the writer is alone, abandoned by old and new classes alike. His fall is all the more serious in that he now lives in a society in which solitude itself, in itself, is seen as a fault. We allow people to be different (that is our master stroke), but not unusual. We accept types, but not individuals. We show our cunning genius in creating choirs of individual people, each endowed with a shrill, demanding, inoffensive voice. But what about the person who is absolutely alone? Who isn’t a Breton, a Corsican, a woman, a homosexual, a madman, an Arab, etc.? Somebody who doesn’t even belong to a minority? Literature is his voice, a voice which by a ‘paradisiac’ reversal, proudly assumes all the voices of the world, and mingles them in a kind of song which can be heard only if (as in those extraordinary perverse acoustic instruments) you go and listen to it a very long way off, far ahead, beyond schools, avant-gardes, newspapers and conversations.” 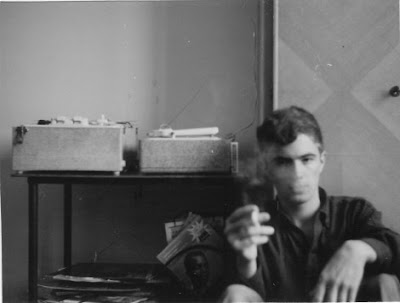 To mosey down along a various stretch of river unequalled, freighting up a satchel with the debris it hauls along in its opaque and shiny moveable girth, or the indigestible toss it discharges in eddies. Like a snake or a sentence or a briefing. To mimeo ‘off’ a small batch of collateral works in mulberry-colored inks with the nostril-scouring odor of some frankly carcinogenic ketone. Melius nesciendo scitur means ‘he is better known by not being known.’ Thus there is no brutish ontological need for any particular trajectory to ensue, nor for anyone’s discourse to declare itself part of the lash and foment of sheer reason. Indefatigable reason, like Bakelite or Formica. Each telling of this henceforth is irremediably likened to mine, as if I were a thing sculpted out of Plasticine, a modeling clay invented by William Harbutt in Bath in 1897. Down where the dam assuages the river’s outpour by means of a temporary impediment, allowing it pause to muster a fit next denied, I stand ankle-deep in this irreproachable urgency like a knot, or a code. The river washes the putty-colored rocks, the putty-colored chubs.

Up in the sky with maneuverability’s untenable retort attached like a lasso to my foot, I measure the tiny breadth where faith’s meager limelight outshines the ravenous elliptical maw of dubiety’s abyss. Ugh. How long I am likely to continue bobbing at the end of such a frank collusion of inimicals is beyond me. If I ditch the pernicious way my usual melancholy makes any candid spat a rhubarb, or any renegade sustenance feral: I seem angelic and cheeky and raw. If I make a messianic clatter by throwing a whole drawer of forks and knives in the kitchen: I detach myself like an invader. Up here the yellow sun screens out the unabashed and foolish greenery, along with the receding endlessness of its sentiments distingués, foliage’s dutiful and comprehensive sign-off. And with all the focus and integrity of an administrator, some unseen bird makes a dour note, and sharply tacks it up.