Haphazardry and clatter. The pert clumsy disjecta membra of aimless forcedness, the ding’d tenon, the split mortise. A kind of failed reverse of supple-jointed flash and capaciousness. (“Capax, qui multum capit, intellegens, andgetul, gripul, numul.” A see a kind of totemry in that “andgetul, gripul, numul” and recall the Army second lieutenant Charles Wright in Italy in 1959 reading Pound’s “Blandula, Tenulla, Vagula” whilst sitting under a Lake Garda-watered olive tree . . . an originary moment. Or that other Poundian fragment “Papyrus” with its perfectly plaintive human yelp of “Spring . . . / Too long . . . / Gongula . . .”—a yelp cut off, Gongula being Gongyla of Colophon, Sappho’s toady and lickspittle, known for adding the summit, the ‘finishing touch’ to Sappho’s work . . .)

Flash. Sontag (“Notes on ‘Camp’”): “To snare a sensibility in words, especially one that is alive and powerful, one must be tentative and nimble. The form of jottings, rather than an essay (with its claim to a linear, consecutive argument), seemed more appropriate for getting down something of this particular fugitive sensibility.”

318.   Suppose we think while we talk or write—I mean, as we normally do—we shall not in general say that we think quicker than we talk; the thought seems not to be separate from the expression. On the other hand, however, one does speak of the speed of thought; of how a thought goes through one’s head like lightning; how problems become clear to us in a flash, and so on. So it is natural to ask if the same thing happens in lightning-like thought—only extremely accelerated—as when we talk and ‘think while we talk.’ So that in the first case the clockwork runs down all at once, but in the second bit by bit, braked by the words.

319.   I can see or understand a whole thought in a flash in exactly the sense in which I can make a note of it in a few words or a few pencilled dashes.
What makes this note into an epitome of this thought?

“Braked by words.” Opposed to “accelerated by words” (their unsuspected velocities, their careenings toward unforeseen ditches, &c.) What of a thinking that’s rhizomaic? (Though how could it be, how could it proceed without markers? Deleuze and Guattari (A Thousand Plateaus): “The rhizome is reducible neither to the One nor the multiple. . . . It is comprised not of units but of dimensions, or rather directions in motion. It has neither beginning nor end, but always a middle (milieu) from which it grows and which it overspills.” And:

A plateau is always in the middle, not at the beginning or the end. A rhizome is made of plateaus. Gregory Bateson uses the word “plateau” to designate something very special: a continuous, self-vibrating region of intensities whose development avoids any orientation toward a culmination point or external end.

Is a word a “continuous, self-vibrating region of intensities”? I can think of no better way of thinking of it. Vibrations only “slowed” by social conventions of use. Which is why, looking wondrously into the shine and umber of, say, “tenulla” or “gripul,” one might, there in Catullus’s Sirmione stomping grounds, one might undergo the ineffable kind of “deterritorialization” that results in a yen to begin endlessly scribbling. (Au moins, as Hemingway’d put it: “Isn’t it pretty to think so?”)

Two remaining tenons to hammer into mortises not readily apparent in the preceding: Paul Klee (Notebooks): “The dot takes time to become a line.” And Marcel Duchamp (“A l’Infinitif”): “Buy a book about ‘knots.’ (Sailor’s knot and others.)” Or, too (relating to the “continuous . . . region of intensities”): “Construct one and several musical precision instruments which produce mechanically the continuous passage of one tone to another in order to be able to record without hearing them sculptured sound forms (against “virtuosism” and the physical division of sound which reminds one of the uselessness of the physical color theories).” How make the lingo itself behave thus, without knotting up (a word is a knotting up), how make a lingo that mimics the whole smeary phenomenon of being’s continuum. Some kind of word circus: overlapping inscrutables visibly morphing, graphemes en train de becoming others in a constant “row” of destabilization. Write that. (“Pretty to think so,” &c.) 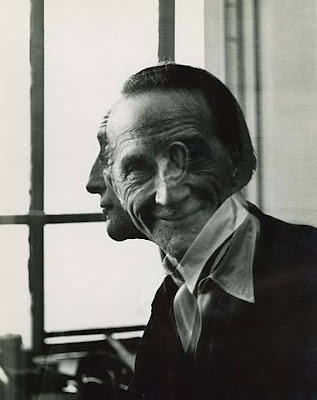