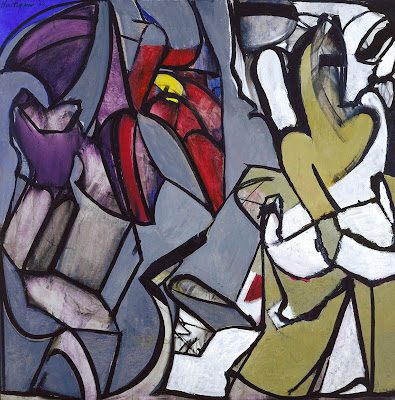 Do you remember in far December how the spokes glittered and wheeled and promised? I fainted near the door, knowing I was you and you disappeared in charge of the currency which had risen, had fallen, on your own sable brow. Could you have meant less, could you have trapped me and forgiven me, could you have relented and freed me? Is that the meaning of these faces in your eyes, the same faces though infinitely varied and colored and hung?

Writ, seemingly, between, say, “Day and Night in 1952” (“Grace may secretly distrust me but we are both so close to the abyss that we must see a lot of each other, grinning and carrying on as if it were a picnic given by somebody’s else’s church”) and “Hieronymus Bosch” (“So he has a funnel instead of a penis / and has put his mediaeval pianist’s hands / on the thighs of a contemporary romance / listening to Brubeck at Birdland. It’s just / too very very.”) Is “Hartigan on Sunday, 1952” lost? Not in Art Chronicles, 1954-1966. Not in What’s With Modern Art? Not in Standing Still and Walking in New York. Took by the fragmentary, its lyrical (nigh Tin Pan Alley lyrical in that remember / December ambuscade) pith. (Think of a scanty O’Hara, kin to how we know, say, Anakreon, or Sappho’s lover Alkaios of Mytilene, through some little picklings of Greek somebody copied out “for personal use only.”) I am “took,” too, by the itch for a lyric criticism (see, something like O’Hara’s hugger-muggery about “the 1958 series of gouaches” in “Growth and Guston,” how the “larger (in scale) and brighter forms . . . pose, stand indecisively, push each other and declaim: they are all purposefully directed and prepared to play subtle comic or mock-histrionic roles in scenes which may have the flooding delicacy of a light-jell or the density of a back-drop”).

Ah, morning becomes disjecta membra. My supposed recovery of an authentic O’Hara fragment a botch. Thumbing Poems Retrieved I find it is “merely” a speech—by “George,” that is, by Hartigan’s nom de brosse—out of O’Hara’s “Grace and George, An Eclogue.” Opening:

Grace and George are showing themselves some scenery and history. The Alps are rising under them like escalators and their blonde hair is tossing in the waves of an advancing sea of problems which, having been faced yesterday, seem only to have grown bolder. They have a very sweet attitude toward each other as if to say, “Well here we are,” which however you will never hear that pair say, not if you listen by the hundreds.

Phooey. I’d intended to patch O’Hara’s lyrical art writing against an early rare Robert Motherwell outburst (out of the 1949 “Preliminary Notice to Marcel Raymond, From Baudelaire to Surrealism,” in the Collected Writings), after quoting Baudelaire (“The arts aspire, if not to complement one another, at least to lend one another new energies”):

A weakness of modernist painting nowadays, especially prevalent in the ‘constructivist’ tradition, is inherent in taking over or inventing ‘abstract' forms insufficiently rooted in the concrete, in the world of feeling where art originates . . .

And: “True painters disdain ‘literature’ in painting. It is an error to disdain literature itself. Plainly, painting’s structure is sufficiently expressive of feelings, of feelings far more subtle and ‘true’ to our being than those representing or reinforcing anecdotes; but true poetry is no more anecdotal than painting. Perhaps the ‘plasticity’ that we painters so admire is no less than the poetry of visual relations.” Whereat Motherwell, in seeming hommage to such a disclosure lighting up within, offers a kind of prose poem:

The miners’ graveyard. Beyond, the town’s ruins, burnt sienna, pink, yellow ochre—arid and clear in the distance, as the hill towns of Italy. Here silent monuments of the past rest, in white October sun, wind sweeping from the Sierra Nevada Mountains. Crystal light! Vertical personages gaping, a broken grave. Here, too, in the midst of gold and silver, there were yearnings for the word, but what confusions! Jenny Lind, the Great Patti, Mark Twain, General Tom Thumb, Uncle Tom’s Cabin companies. As with French poets, desire for the sensuous “new.” Dragged up the mountains from California in eight-span wagons, wood, to construct French baroque mansions. Glass chandeliers from Vienna. But the desert air is white, Mallarmé’s swan.

Hartigan quoting O’Hara’s “Second Avenue” lines—“. . . and when the pressure asphyxiates and inflames, Grace destroys / the whirling faces in their dissonant gaiety where it’s anxious, / lifted nasally to the heavens which is a carrousel grinning / and spasmodically obliterated with loaves of greasy white paint / and this becomes like love to her, is what I desire / and what you, to be able to throw something away without yawning / ‘Oh Leaves of Grass! o Sylvette! oh Basket Weavers’ Conference!’ / and thus make good our promise to destroy something but not us.” Moving, in the context of Hartigan’s notes full of floundering, uncertainty, reworking. (She quotes, too, a comment of O’Hara’s regarding “the danger of painting from experience (or observation) instead of talent of style.”)

I think what I feel for is the point where the paint seems to resist me, to come from the canvas outwards instead of being “layed on.” I work slowly until things seem to become inevitable, and then it all speeds up so fast I can hardly put it down. Perhaps my sphere of interest or “subject material” could be called “façade,” the empty gesture, the dead ritual, the costume, the mask. Painting is not putting on a mask but taking it off.

[Recalling O’Hara’s insistence at the end of “In Memory of My Feelings” regarding “the scene of my selves, the occasion of these ruses”: “which I myself and singly must now kill / and save the serpent in their midst”?]

I am reading Flaubert’s letters . . . The one to du Camp on success seems so acute—“‘To be known’—is not my chief concern—that can give complete gratification only to very mediocre vanities. Besides, is there ever any certainty about this? Even the most widespread fame leaves one longing for more, and seldom does anyone but a fool die sure of his own reputation. Fame, therefore, can no more serve you as a gauge of your own worth than obscurity.—

I am aiming at something better—to please myself. Success seems to me a result, not a goal.”

I have been dissatisfied with my work lately. Not only don’t I work enough, but the Daisy [Aldan] & Olga [Petroff] picture see to me to be thin, and not to have enough excess in it. Flaubert says some things about this in a letter to Louise Colet—“. . . you can judge the excellence of a book by the strength of its punches and the time it takes you to recover from them. And then the excesses of the great masters! They pursue an idea to its furthermost limits. In Molière’s Monsieur de Pourceaugnac that is a question of giving a man an enema, and a whole troop of actors carrying syringes pour down the aisles of the theatre. Michelangelo’s figures have cables rather than muscles; in Rubens’s bacchanalian scenes men piss on the ground;—I think that the greatest characteristic of genius is, above all, energy. Hence, what I detest most of all in the arts, what sets me on edge, is the ingenious, the clever. This is not at all the same as bad taste, which is a good quality gone wrong. In order to have what is called bad taste, you must have a sense for poetry; whereas cleverness, on the contrary, is incompatible with genuine poetry.”

Aug. 11 [1954, at Fairfield Porter’s house in Southampton]
Frank said to-day he thought we were the opposite of the previous generation who left the distractions of the city in order to be alone with themselves & their work in the country.

On the contrary there seem to be so many diversions out here, even to lying in the sun and turning over—I think I won’t get anything done until I return to NY. Nature, if you love her very much, is infinite in her diversions.

Dec. 7 [1954]
All through the ages artists have either been pulling art all apart or putting it back to-gether again. It seems as though we I have to put it to-gether—that makes us me a classicists, I guess. It’s a sometimes unfortunate position for one of a revolutionary temperament.

One of the reasons for Cézanne’s greatness is that he not only put art all to-gether again after the impressionists, but he gave all the clues for a future tearing apart—the cubists.

Feb 9th [1955]
To make a virtue out of mediocrity seems to me a most horrific kind of daring, like a beggar showing his sores for pity and profit. 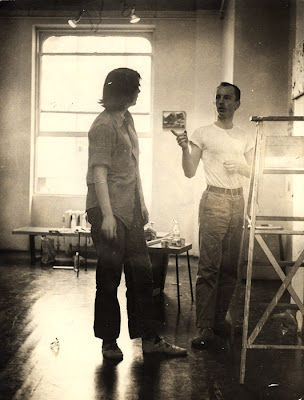