Not sure how (or if) that “fits” the likely careering jack of today’s “entry.” Vaguely about the “scribble”—seemingly utterly opposed to a gun poked up against a printer, that sense of certainty, of the mighty justice of one’s saying (something), if of nothing beyond that. H. D. (in what Robert Duncan calls “a self-mocking voice” that “anticipates the reproof of the utilitarian realist” and skips to copy “the mercantile skeptic voice”) touting / lamenting how:

. . . jottings on a margin,
indecipherable palimpsest scribbled over

with too many contradictory emotions,
search for finite definition

of the infinite, stumbling toward
vague cosmic expression,

with credit-loss too starkly indicated,
a riot of unpruned imagination,

invasion of the over-soul into a cup
too brittle, a jar too circumscribed,

Out of The Walls Do Not Fall. A lovely run, slurry with Latinates (oughtn’t “one” attempt a thorough assessment of—there’s that “mercantile” yawp intruding—that lingo against the implacably “Greek” H. D.?)

I keep going back to the novelist Robert Steiner’s Toward a Grammar of Abstraction: Modernity, Wittgenstein, and the Paintings of Jackson Pollock. Whence the “scribble” and digress, its way of “stumbling toward / vague cosmic expression.” Joyce (Finnegans Wake) talks of “chalking up drizzle in drizzle out on the four bare mats” (a Pollockesquerie, surely), and asks: “How you would be thinking in thoughts how deepings did it all begin and how you would be scrimmaging through your scruples to collar a hold of an imperfection being committled.” Steiner’s line:

The scene of the line in painting originates in a primitive idea of the line’s function, that is, as a line of communication, something joining one thing to another either in simple geometry or in terms of cause and effect as it travels in one direction only, as it progresses . . . As to the line as via negativa, which might characterize at one register the line in abstraction (thought or painting, or even the literal definition of cliché as photographic negative), we learn to understand the line that is not reasonable by seeking others like it with which we are familiar. How, in short, do we conceive the meaning of a line that cannot be attached to anything we know, even to itself to form a circle? That is not a line, it is a scribble (Lacan), squiggle (Wittgenstein), “sexophonolinguistic schizophrenesis” (Joyce)—because it does not behave as a conjunction or as a distinction except with regard to what it is not. The via negativa of the scribble retains the trace of the rational function of the line, of the line as rational sign, embodying at most the skepticism of the pyrrhic philosopher and thereby pointing toward the border between the known and the unknown, for example, conscious and unconscious, linear and spatial, presence and lack . . . The scribble is at first the tool in a modified state to the extent that it only non-sensically relates to things other than itself. At another register its name indicates now its otherness to the line, its inutility as a line. If I say the scribble is merely another kind of line, I am accounting for (limiting it to) its “digressive” character. We can draw a straight line thinly or thickly without its function being altered, just as singing a note loudly or softly will not affect the note. The scribble, on the other hand, is similar to asserting something but beginning with “I believe.”

Is the kind of chalk-lingo-in-a-drizzle register seen in something like Frank O’Hara’s “Mock Poem” insert into “The Hell With It” (“One pentative device, and then rebeat / To knead the balm, prepucible depense, / Be undezithered pouncenance . . .,” &c.) a way of scribbling? Is Lacan’s illusory muttering in “What Is a Picture?” a way in (nonsense as trompe-l’œil, refusing appearance whilst giving the appearance of. . .)? Lacan:

What is it that attracts and satisfies us in trompe-l’œil? When is it that it captures our attention and delights us? At the moment when, by a mere shift of our gaze, we are able to realize that the representation does not move with the gaze and that is merely a trompe-l’œil. For it appears at that moment as something other than it seemed, or rather it now seems to be that something else. The picture does not compete with appearance, it competes with what Plato designates for us beyond appearance as being the Idea. It is because the picture is the appearance that says it is that which gives the appearance that Plato attacks painting, as if it were an activity competing with his own.

Nonsense as “the appearance that says it is that which gives the appearance”—a way of asserting (something) “but beginning with ‘I believe.’” (Wittgenstein: “Every sign by itself seems dead.”) And there’s Ezra Pound quoting Kung in Canto XIII with a pertinence “not impossible . . . but, of course, . . . not likely”:

“And even I can remember
“A day when the historians left blanks in their writings,
“I mean, for things they didn’t know,
“But that time seems to be passing. . . .” 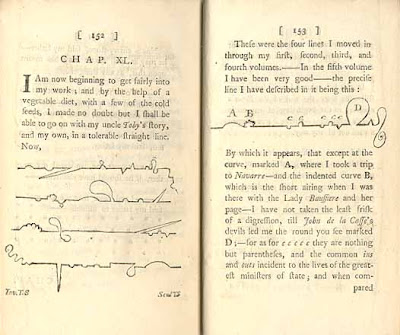 Laurence Sterne’s The Life and Opinions of Tristam Shandy, Gentleman, 1759-1767