Rukeyser’s Darwin and the Writers

Read Muriel Rukeyser’s Darwin and the Writers, edit’d by Stefania Heim, a number (Series 1, Number 3) in the Lost & Found booklets of the Poetics Documents Initiative. Rukeyser attempts to disentangle the response of various writers to “the powerful and ramifying influence of Darwinism”—quoting largely. Thus, James Russell Lowell, of science: “I hate it as a savage hates writing, because I fear it will hurt me somehow,” and, of evolution, “Such a mush seems to me a poor substitute for the Rock of Ages—,” part of a sentence in a letter of September 12, 1879 (to one Grace Norton) that continues, “by which I understand a certain set of higher instincts which mankind have found solid under their feet in all weather.” Rukeyser’s argument is that Darwin allow’d writers—beyond exemplary attendings and observational tact—a muster’d leaning toward a processual approach to the world and its writ authority: “Darwin turned loose the threat for those who could not let themselves see transformation as a preserver of form.” (Rukeyser asks emphatically: “What does inner security rest on? . . . Does it rest on dogma or transformation?” and makes it clear—a thing “of use” in the “era” of shouting loud dogmas today—that “If the answer is dogma, then every writer who wants to write with authority, to say This is the way things are, is threatened.”) So Whitman, who, according to Rukeyser’s reading, found Darwin’s “refusal to deal with ‘hopes and fears’”—“the omission of soul” in what one’d call Darwin’s objectivism—an incompleteness and a disappointment. Rukeyser:

In the superb passage, part of Specimen Days, where we find Whitman’s “Truth consists in the just relations of objects to each other,” he goes on to say that while Darwin—and Fichte and Schelling and Hegel and Kant—are indispensable “to the erudition of America’s future, I should say that in all of them, and the best of them, when compared with the lightning flashes and flights of the old prophets and exaltés, the spiritual poets and poetry of all lands, (as in the Hebrew Bible,) there seems to be, nay certainly is, something lacking—something cold, a failure to satisfy the deepest emotions of the soul—a want of living glow, fondness, warmth, which the old exaltés, and poets supply, and which the keenest modern philosophers so far do not.”

Which may be Whitman’s version of being content with (seeing the necessity for) “half knowledge”—those “lightning flashes and flights” akin to any “fine isolated verisimilitude caught from the Penetralium of mystery.” (Darwin’s own “poetic” stance is caught in the story—possibly apocryphal—of the gardener who, ask’d of Darwin’s health, reportedly reply’d: “Poor man, he just stands and stares at a yellow flower for minutes at a time. He would be better off with something to do.”)

Rukeyser’s essay is fleet, sparing of connective tissue (and full of similarly skint remarks—she quotes George Bernard Shaw’s preface to Man and Superman : “Effectiveness of assertion is the Alpha and Omega of style. He who has nothing to assert has no style and can have none: he who has something to assert will go as far in power of style as its momentousness and his conviction will carry him. Disprove his assertion after it is made, yet its style remains. Darwin has no more destroyed the style of Job nor of Handel than Martin Luther destroyed the style of Giotto,” and adds, leaping with utmost faith, “The juxtaposition of Darwin, Job, and Handel is a fertile one: we are back at “the rare union.” (The essay, found in the New York Public Library’s Berg Collection archives, went unpublish’d, reject’d by The Nation in 1959—editor Heim suggests in an excellent “Afterword” that Rukeyser’s onus and “failure” is the result of “the way she mixed fields and registers”—she wrote a biography of the reclusive, little known mathematician and “father of physical chemistry” Willard Gibbs, only to see it disparaged—by Joseph Wood Krutch, in The Nation (1943): “A climax of absurdity seems to be reached in the fifth chapter from the last, which is entitled Three Masters: Melville, Whitman, Gibbs, and in which, by implication at least, we seem to be asked to see the relation between the second law of thermodynamics and the White Whale”—to which Heim retorts: “Ironically, Krutch put his finger on one of the most radical, important, and, here, relevant aspects of Rukeyser’s book . . . the articulation of a “meeting-place” between scientific and literary imaginations.”) It is, as Heim reiterates out of Rukeyser’s The Life of Poetry (1949), “the dialogue of separation which begets separation.” Applicable to the internecine fronts, too.

Rukeyser ends—rather inconsequently, I’d think, though it allows her to say “The poet is a scientist, a doctor”—by quoting Williams’s mention of Darwin in “Asphodel That Greeny Flower”:

. . . There is no power
so great as love
which is a sea,
which is a garden—
as enduring
as the verses
of that blind old man
destined to live
forever.
Few men believe that
nor in the games of children.
They believe rather
in the bomb
and shall die by
the bomb.
Compare Darwin’s voyage of The Beagle,
a voyage of discovery if there ever was one
to the death
incommunicado
in the electric chair
of the Rosenbergs.
It is the mark of the times
that though we condemn
what they stood for
we admire their fortitude.
But Darwin
opened our eyes
to the garden of the world
as they closed them . . .

I turn’d to Lorine Niedecker’s late and terrific “Darwin” that begins:

“Species are not
(it is like confessing
a murder)
immutable”

I remember, he said
those tropical nights at sea—
we sat and talked
on the booms

sailed out
of Good Success Bay
to carcsss-
conclusions—

Niedecker’s stripping out the verbiage of Darwin’s May 22, 1860 letter to Asa Gray:

I cannot persuade myself that a beneficent and omnipotent God would have designedly created the Ichneumonidae with the express intention of their feeding within the living bodies of caterpillars . . . On the other hand, I cannot anyhow be contented to view this wonderful universe, and especially the nature of man, and to conclude that everything is the result of brute force. I am inclined to look at everything as resulting from designed laws, with the details, whether good or bad, left to the working out of what we may call chance. Not that this notion at all satisfies me. I feel most deeply that the whole subject is too profound for the human intellect. A dog might as well speculate on the mind of Newton. Let each man hope and believe what he can. . . .

Hence Whitman’s disappointment. Hence, too, the flux Rukeyser sees. Heim: “As Rukeyser writes in The Life of Poetry, ‘Growth is the security of organic life. The security of the imagination lies in calling, all our lives for more liberty, more rebellion, more belief.’” 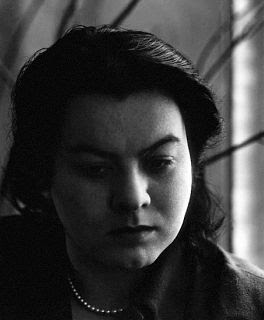