Dorn’s By the Sound

Spent too long dickering with something about the way seeing’s a gash in the registry, a machine with a limit’d number of selectors (corresponding to available linguistic resources), and didn’t make a maquette for today. Modello abrupt: Dorn’s lovely assessment of the post-WWII years “before the propaganda of want—which crowded out the circumstances of human affinity. That was when everybody was under the same bleak outlook, no inside trades, no vomiting into the system of purely verbal claims . . .” (In the 1991 “Preface” to By the Sound—reissue of the earlier, lamentably-titled Rites of Passage (Frontier Press, 1965). That “vomiting” of “purely verbal claims” likely refers to the ongoing academicizing / professionalizing of la poesía norteamericana, particularly that brand begun in the late ’seventies—and awash amongst “us” now.) Dorn: “I never met anybody in those days who didn’t know what time it was. Now nobody says anything.” The book—I did manage to tuck into a few pages late—is alarmingly Hemingwayesque (up to the point that one recalls how every young man’s book for a stretch there is “alarmingly Hemingwayesque” in its sentence-ry). Exemplary (of the sun): “Then it flashed through a group of hemlocks across the vacant lot. The trees surrounded an old house and the rays diffracted into spikes and hit the hills for a few minutes making of the aluminum-sided grain elevator for a while a bright mirror.” Conjunct’d verb phrases awkwardly stitch’d into a sequence—“for a few minutes” and “for a while” heel-and-toeing it one to the other so closely several discreet actions get made out of a (mostly bland, unblandishing) continuum. Which punches the story along. Or see the interior monologue of Carl Wyman (the Dorn character, who, with wife Mary and kids, is about to leave one Pacific Northwest town for no other reason than because he can manage, with a few dollars, to do so). A man notes how early it is that “the pussy willows are out in that ditch back of camp” and Carl agrees:

Yes it is, Carl said. He thought yes, that’s very early. It’s like that here. Everything, early and late, and hopeless and hopeful and light and dark, mild and harsh . . . but slow, everything slow and then in April there won’t be any more willow buds . . .

(I think of the waiter in “A Clean Well-Lighted Place” continuing “the conversation with himself”: “What did he fear? It was not a fear or dread. It was a nothing that he knew too well. It was all a nothing and a man was a nothing too. It was only that and light was all it needed and a certain cleanness and order. Some lived in it and never felt it but he knew it all was nada y pues nada y nada y pues nada.” And the displacement of Hemingway characters mimick’d in Carl’s “It’s like that here.”)

Dorn, in the “Preface,” claims that “By the Sound, masquerading as a ‘novel,’ is simply a sociological study of the basement stratum of its time: the never ending story of hunger and pressing circumstance in a land of excess.” (Echo of the 1974 Collected Poems statement that—“From near the beginning I have known my work to be theoretical in nature and poetic by virtue of its inherent tone”?) I am remind’d of a line by Olson quoted in a 1963 Vancouver letter to El Corno Emplumado by A. Fredric Franklyn (append’d to the Ammiel Alcalay-edit’d Lost & Found booklet, The 1963 Vancouver Poetry Conference / Robert Creeley’s Contexts of Poetry With Daphne Marlatt’s Journal Entries): “I am just an old scoundrel on fiction. I mean I abhor fiction. I mean, in the sense of making up a story.” I ruminate a little regarding that distrust of “making up” (amongst the “New Americans”)—is that “output” of the age of Sputnik and technological go-getting, seep’d down to its poetickal citizenry? To what degree’s the “standard” persist still, that alliance of something hard-nosed (“objectivist”), undistort’d by the “flighty” (that femininity!) amongst the malingerers along that continuum (its proclaim’d “lineage”)? Isn’t it all story’d by degrees? (Jeremy M. Davies, in Rose Alley on how “failure of imagination is what dooms most reform”: “The radical must make the case that he’s been assigned his uniform unjustly—that he’s always deserved a better. To say instead that each outfit is just as counterfeit as another brings allegations of self-importance. It’s quite natural to want a clown punished for reciting tragic verse . . . Better to stay on as the fool. An old law protects the zany, the half-wit, the loon.”) It’s Dorn’s canny “sociology” though that makes By the Sound something beyond a Hemingway knockoff (and a harbinger of late Dorn’s “everlasting no”). So: “When a man has nothing it would be senseless to censure him for petty thievery. Even major crimes are not so definable as they are said to be, many crimes are that only by definition of who is the transgressor.” Or:

The unemployed man has not been born to anything. At the same time that is his fate, it is also, never forget, his salvation. For practically no matter what is proposed for him to do he will do it, but money is the crux of his whole search, and he will never be misled by false propositions such as a “good, steady job” or a slogan such as “work your way up.” No, there are two levels and two only in which money declares itself. The highest of course, is that in which there is such an amount that its “activity” is what makes money interesting, what it can do, like a toy train that can be switched, and made subject to elaborate signals. But then there is the level of the man who has none at all, and then the money he can get by whatever means takes on some qualities of this same operation. The smallest amounts, say two or three dollars, can suddenly become the levers with which he makes his little realm go . . .

(Dorn allows one character, the perennially drunk carpenter James McCarty, who lives with Ramona the Esquimau woman in “two pea-shacks,” a story of driving—“asleep or . . . dulled from drinking, possibly both”—a car into a river one night. McCarthy, car submerged, rolls down a window, climbs out, and bobs up the the surface. The current deposits him ashore; he walks to town. Dorn: “He spoke of this affair very often with the conclusion: See, that’s the difference. And whether one were really aware of it or not, there did seem to be a difference. A tale that has no more of the logic left in it.” Phrase lovely in its mystery.) 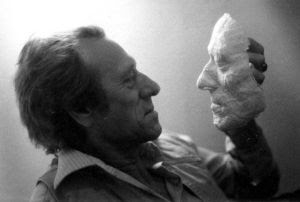