Overload’d circuitry, and a stormy morning advancing. I read off, etching some serpentine line through shallows soon effaced by the wavelets of my subsequent reading. (That’s what reading is: though one returns to the splashings, vaguely cognizant of each crepitant rip and rush of that same audacious water through narrows newly out-sculpt’d.) Ed Dorn, in the “Preface” to Douglas Woolf’s Hypocritic Days and Other Tales (Black Sparrow, 1993), talks about―he’s diagramming “western space” and “speed” (“speed overcomes space until it just turns into it”)—how a man ’d show up suddenly with “a couple of quarts of blackberries . . . picked with the morning dew, five hundred miles away”—that, against the way “glaciers move a foot a day”—and concludes that here “is an energy flow over which post-modern critical theory can have no destructive control―any attempt to replicate this system results in immediate prophylaxis of the syntax.” The unsung replica: reading itself. Dorn, with outlandish verve (range-savvy of the omnivore) sees (in Woolf) that the writer’s (reader’s) “most radical and projective stylistic device was to embody ‘what is not there’ and to echo ‘what is not said’―the reading mind is arced across the gaps in the mental terrain―the spiritual imago of abandonment, the late-modern holocaustic onslaught on humanity and its animal relatives. For the race of live readers, these linguistic chasms switch on the enterokinase and the whole tryptic cognizance between the text and the story.” A claim that earns its duodenal appendage: “It’s the record.”

Jumpcut the ratiocinatory vignette. (Or, append’d: “Jumpcut the ratiocinatory vignette, Al.”) I got “to” Dorn’s Woolf by way of the Claudia Moreno Pisano-edit’d Amiri Baraka & Edward Dorn: Selections from the Collected Letters, 1959-1960, the first number’d (Series 1, Number 1) booklet in the ambitious and excellent archival research and recovery “poetics document initiative” (point’d largely at “extra-poetic work . . . correspondence, journals, critical prose, and transcripts of talks” of, loosely, writers of the “New American” poetries) call’d Lost & Found, direct’d by Ammiel Alcalay. There’s a lovely exchange between Baraka (“how come we always argue about lowly prose writers, anyway”) and Dorn arguing the merits of Woolf against the Western novels of William Eastlake. Baraka (“[Mar ? 1960]”):

I just remember now you said “Woolf at Eastlake’s expense” or something? I liked Bronc People. . . also a story that was in a few Evergreens ago 3 Heroes And A Clown. But I did really dig those things of his a great deal. Also, a story I read long time ago called Little Joe. I haven’t read Woolf’s Fade Out, but I have liked the stories I’ve read (all you western cats hung up on “bureaucracy,” the hideousness of? As Woolf in “Cougher,” “Bank Day,” &c. seems to come back to that. Which, I’m aware, is valid. And probably you can see no heavy foot stance in Eastlake??

Mr. Jones—it’s that Eastlake in those novels does have a heavy foot down—the fucking pseudo-myth of the Indian translated talk—it’s a little “Old Testament” no? Besides I dig his stories too. And besides we’re not always arguing abt “lovely” prose writers. We—you & me, talk of lots of other things & besides, I agree w/ everything you say, almost.

Marvelous, the half-sneer of that “lovely.” Notes admit that Dorn wrote a piece call’d “The New Frontier” about Woolf (print’d in Kulchur in 1963). And that Creeley’d print’d Woolf’s The Hypocritic Days in Mallorca in 1955. Enough to trigger the readerly mouth-juices that connect directly to enzymatic enterokinase. Dorn’s later (1993) Woolf-piece (with an epigraph out of Melville’s The Confidence Man: “. . . where the wolves are killed off, the foxes increase”) is full of Dorn’s own wolfishness, that sorely-lacking refusal of all the viciously boost’d gizmos of progress and advancement, and all the game kowtowing that allows its minions to persist. He writes:

In the widely comic survey Douglas Woolf did of the outback west, its arresting simplicities, its provocative dangers, its fearsomely selfish embarrassments, its desperate resistance to the regimented and poisonous cloud of acculturation lying on the horizon, we have a deposition which will stand in rebuke and correction to the boosteristic waves of development forever enveloping the great hemispheric far high west. From Alaska to Patagonia, nobody who likes thin air will ever forgive them.

And if, for Woolf, “the whole struggling stratum” is mostly “amusing”—Dorn labels him “the nicest ironist since Swift”—Dorn’s own rage is eloquent in crescendo:

“America” is a smug, hardhearted, unforgiving nation of jackals, which forever slaps itself on its back over how generous, selfless and idealistic it is. It is the most preposterous propaganda barrage since Goebbels ran an office, in bloodier and more interesting times.
You go to the window. You look out at the immense night. You see the plow, you see the dipper, you see the fish and you see the net. Every thing blood and bone ever needed is shown and displayed in the sky. You can hunker down and pay the mortgage, and save yourself a lot of trouble, or you can see the show. There actually isn’t any other choice. For a mere traveller has no access to the haunts.

Woolf’s west, Dorn concludes, is “underlaid with genetic proto-temps, the outwash of the Great Depression.” (Surely Dorn count’d himself therein.) Woolf, who, no “mere traveller,” rang’d widely in nigh-constant mobility, working odd jobs, migrant farm work to stadium beer-hawking, living in makeshift shelters (“under blankets spread over tree branches”) and ghost towns, wrote: “I’m naturally devoted to the written word. It's the one thing man has that other animals do not. Parrots can talk, flies can fly, monkeys can drop things, technicians can copy them all. If there were only one reader left in the world, I would write to that one as lovingly as I do now.” There’s a terrific humility in that “naturally devoted” (and that “lovingly”)—it rejects all the sour jousting solicitude of the ready-ambitious, the rank implacable anxiety of the recently-arrived, the ubiquity of careerist mayhem un peu partout. It makes a plausible stance of pure calm indifference to all things beyond the immediate human scale: this word here and then that word there, “every thing blood and bone ever needed.” Here’s that glorious tar-black storm now. 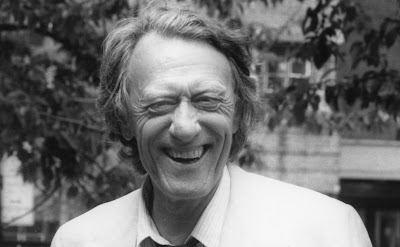