Glean’d (rashly) a couple of things out of Stein (randomly). One is out of “Portraits and Repetition”: “Melody should always be a by-product it should never be an end in itself it should not be a thing by which you live if you really and truly are one who is to do anything . . . I had begun again . . . working at grammar and sentences and paragraphs and what they mean and at plays and how they disperse themselves in relation to anything seen. And soon I was so completely concerned with these things that melody, beauty if you like was once more as it should always be a by-product.” That, and the run-up to “I am I because my little dog . . .” in “What Are Masterpieces . . .”: “The thing one gradually comes to find out is that one has no identity that is when one is in the act of doing anything. Identity is recognition, you know who you are because you and others remember anything about yourself but essentially you are not that when you are doing anything.” Akin to Fenollosa’s line that “Art and poetry deal with the concrete of nature, not with rows of separate ‘particulars,’ for such rows do not exist.” That is, any noun’s simply by-product of a verb, a stopgap, snapshot, a momentary expedient against the ongoingness, the sempiternal flux. Fenollosa: “We are forced, for the sake of quickness and sharpness, to file down each word to its narrowest edge of meaning. Nature would seem to have become less like a paradise and more and more like a factory. We are content to accept the vulgar misuse of the moment.” And: “A late stage of decay is arrested and embalmed in the dictionary.” I read, though, the writing body’s dispersal into that “no identity . . . when one is in the act of doing anything.”

Numerous testimonials. Here’s one out of Creeley (interview’d by Linda Wagner in Contexts of Poetry: Interviews 1961-1971): “Poetry seems to be written momently—that is, it occupies a moment of time. There is, curiously, no time in writing a poem. I seem to be given to work in some intense moment of whatever possibility, and if I manage to gain the articulation necessary in that moment, then happily there is the poem.” And, later, insisting that the writing abolit le temps: “. . . if it goes—or, rather, comes—in an opening way, it continues until it closes, and that’s usually when I stop. It’s awfully hard for me to give a sense of actual time because . . . I’m not sure of time in writing. Maybe to me it seems a moment and it could have been half an hour or a whole afternoon.” Or there’s Michael Palmer, replying to a query by Lee Bartlett (in Talking Poetry), mopping up some of the arguments (and culpables):

If you are speaking through language, it is after all not only your voice. . . .
It’s like the question of Blake. When he says a fairy sat down on his desk and whispered “Europe” to him you wonder did it really happen, or is this simply a metaphor for the poem which arrives from “outside,” a case of pure inspiration, breathing in? Jack Spicer represented that notion of dictation by talking about Martians and spooks arriving and giving him his words. For Yeats there are the famous other-world figures who gave him his metaphors. For me this represents virtually a linguistic model—an abolition of pure subjectivity. You become receptive to a whole variety of language that is more expansive than your own, that can see more than you can see. When you do enter into the poem in that respect and trust to it, in looking at it afterward you wonder, did I do that? Well, the answer is, of course, that you didn’t. Various selves, aspects of a heightened attention, did it in a certain way, but not your self.

Concatenations of ages and identities, the ductile motility of years. Species cacophony (Lear’s “poor, bare, fork’d animal” lines intrude: “Thou owest the worm no silk, the beast no hide, the sheep no wool, the cat no perfume. . . Thou art the thing itself . . .” proceeding to unbutton the “lendings” that clothe him, identity accommodated by dismissal.)

Notes (gleanings) apt to scuttle off into meagre remnant pulsing like the Crab Nebula. Unsettling a trajectory merely sketch’d. Michael McClure—in “Double Moire for Francis Crick,” out of Mysteriosos and Other Poems (New Directions, 2010)—says:

AMINO TRIGGERS IN SPACE; in ponds
on ripples, and among the moons of Saturn.
Everything burns for the eyes that will
come into being. The twisting shapes
are hunting their forms, the big ones
grow and shrink and in themselves are the answers.

WE ARE ACTIVITY—membrane edging under membrane . . .

SOFT TOES CURL ON THE FLOOR, PRIMATE STYLE
with gleam of varnished wood beneath them.
The garden does not sleep at night.
Depths of darkness intricately mottle
themselves in the smell of hollyhocks and jasmine.
The flashbulb snaps off and on—
again, and again, and again, right in my face.
Four pictures are shot, and there
ARE SPOTS IN FRONT
of my eyes. Now I am
an old man with freckles
on my high forehead. (Almost forgotten
is the way the wolf moves on entering
a restaurant.) Now there is no
pretense, just the bright
oranges, browns, blacks, and blues of the photos.
The lilt of coyness hides the predator’s
intent sneer. Long white hair is the head
of an eagle. There is the faintest
bruise of wisdom in the bags
under my sliver–ringed, dark irises.

Or, proceeding with intent bent by attention to the constant forging: “THERE IS A FIRE AND TRAJECTORIES / OF ENERGIES bare of knowing or thought / where black inferno meets meat in bliss. / . . . / Here beings (all is beings) mutely perceive themselves first.” 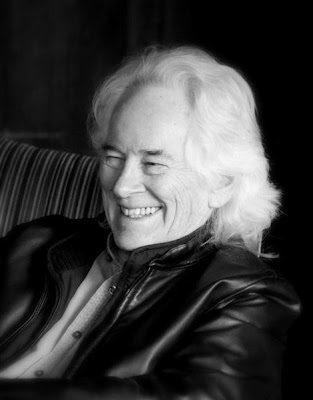