Scuttling along half-cock’d, morning itself baldly covetous of its vapours. And its sweats. A thunderstorm approach’d around three a.m., sneaky-pete style, though the dog dug it out of its distance, ear to earth Indian-style, and whimper’d loudly for a good hour. Only calm’d when the rain itself arrived, shushing. (Williams: “Whatever ‘life’ the artist may be forced to lead has no relation to the vitality of his compositions.”) I read through Creeley’s Pieces, straight through fungo-hitting style (Williams—talking about Henry Adams: “pure style: never to be understood”), left the balls all out there in the field. A denatured thing, its terribly limit’d vocabulary, its peaked reiterations, it wholly sapped populace (figural, bloodless, myth’d, “Hermes, in dark glasses”). No sudden gallop down a stretch, no intrusory heave of the beyond (“Here is all there is, / but there seems so / insistently across the way”), no uncanny lyrical outburst: “Never write / to say more / than saying / something.” Though: one did rather willingly commit to memory a line (out of “The Finger”)—“attention the whip of surmise”—without knowing exactly who’s driving what team of wild-eyed horses. Is it that attending bolsters conjecture, or that a hunch is condottiere (mercenary) to seeing?

Look’d into, too, Creeley’s A Day Book (“precisely what it says it is, thirty single-spaced pages of writing in thirty similarly spaced days of living” is the claim). Daily writing it isn’t. Gaps in the fabric un peu partout, the thing running November 19, 1968 to February 27, 1969 (“But time and space may well be subjective impressions, like they say.”) Tout à coup a recall of reading Cecil Giscombe’s Into and Out of Dislocation, up north (East Jordan) summer of 2000, a book point’d (brickwork) with that, a Creeley vernacular: “like they say.” Creeley begins one entry (February 13, 1969):

“To tell what subsequently I saw, and what heard. . . .” Williams—also like Allen’s “What did I notice? Particulars!” Brought again and again to fact of, what is it—here, there. The time of it. Agency’s modality, i.e., my own.

Gap then of some fifteen, twenty minutes—no evidence of same immediately clear, to me at least. So could write one word, say, wait ten minutes, twenty, hour, hours, day, days, weeks, months, years,—but there the limit does begin to be manifest like they say—and so on. . . . You thought I just wrote it straight out, like. But I didn’t. I wrote one word. Waited five days. But think of the arithmetic and / or is it possible, mind you, is it possible to write (how much?) in what length of time, given that means of proceeding. Can we wait for it. Would you rather sit in the car. Are you tired, of waiting. What, are you waiting for? Why wait. A simple downpayment secures our order.

Spinning a temporal obsession into a kind of desultory humoresque. (Isn’t Creeley’s “default” a kind of wry, chisel’d abstract dealt out with a deft economy of means? How rare the “tips of celery” of Creeley’s “The Farm”! That sudden particular tangible thing.) The initial Creeley-quoted Williams line (out of “The Desert Music”) continues “—to place myself (in / my nature) beside nature // —to imitate / nature (for to copy nature would be a / shameful thing). . .”

Though: my turning to Creeley jump’d (largely) out of a thrilling riff he’d got himself into in conversation (mid-Berkeley Poetry Conference) with John Sinclair and Robin Eichele (collect’d in Contexts of Poetry: Interviews 1961-1971), talking about Red Pygmy Pouters (and the “lovely democracy” of bird-breeding—“all that really meant anything was the particular bird and that bird did have or perhaps not simple parallel but actual parallel with the circumstances in poetry: it was human attention given to the possibilities of human life. The bird was as perishable, as fleeting and as useless an anything can be . . .”) Creeley:

A bird that gets to be a champion is a show bird; it’s a very careful vocabulary. But then you have what are called stock birds and stock birds are the birds that are used, frankly, in breeding show birds. Stock birds may have overemphasized characteristics. Then you do get into genetics. But a stock bird is a very distinct bird in that it is used in breeding the qualification, the qualities you want to have in breeding a bird that will then be used for show. But a show bird is oftentimes of no use as a breeder at all. I mean, he’s just a moment in time. I remember one instance of pigeons I was given as a kid—I had an interest early—a pair of fantails, a very common bird around New England. Once you got past icehouse pigeons, the pigeons you could get by climbing up into icehouses or whatever they nest in, and taking the young two or three week old birds out of the nests, getting young squeakers as they call them—once you get past that you then went to homing pigeons, homers we used to call them, or fantails—these were very common varieties. Well, this one pair of fantails I was given suddenly bred a fantastically good fantail. But I was a kid; I didn’t know anything about banding, and you can’t show birds without having them banded; that’s part of the etiquette in the show scene. This bird was what we call a sport; he was suddenly a lucky strike in the genetic situation. But I mean that taught me to pay attention to a lot of things. I’m surprised now; I haven’t been engaged with pigeons for almost fifteen or more years—almost twenty years now—and yet the habits of that attention as we’re now talking is so precise, that they give me the vocabulary immediately. I mean, I couldn’t tell you the same kind of detail about the method of scanning a line of poetry or various systems of metric that are involved with descriptions of poetry. Now I found that one information was useful and felt right in my environment; not that I wanted to be only a pigeon man but I mean that kind of information taught me a lot. It taught me how to pay attention to an awful lot of things.

Poundian, that “lucky strike in the genetic situation,” that show bird who’s “just a moment in time”—see “an intellectual and emotional complex in an instant of time.”) There’s an agility—call it love—here in Creeley’s monologue (it continues), tongue “more current and slipper” than in so much of the seemingly pincer’d (cramp’d) pieces of the “era.” Ammiel Alcalay, in an Afterword to the Lost & Found booklet, The 1963 Vancouver Poetry Conference / Robert Creeley’s Contexts of Poetry With Daphne Marlatt’s Journal Entries, talks of “one of Creeley’s favorite quotes by Olson: ‘we do what we know before we know what we do.’” (Akin, maybe, to the J. H. Prynne dictum Rich Owen supply’d the other day—out of “Star Damage at Home” (in 1969’s The White Stones): “we must mean the / entire force of what we shall come to say.”) 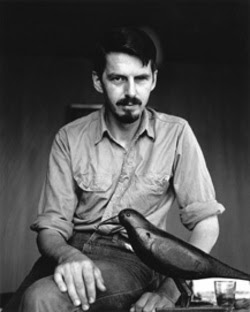