Sun-shedding hours spent niggling Roethke’s line “Wren-song in trellis” (sonic-comparable to Keats’s “Hedge-crickets sing” to my ear, with the add’d pleasure of the spouting form of the trellis mimicking that of the wren’s hazardous up-bubbling spray) to no end (a daub of a piece that “gets to” Zeus falling down in the form of a miser’s pile of gold “eagles” into the lap of Danaë, you can see reason for its perennial squib-status, I suspect)—resulting (gulp) in a morning need (now) for the manufactory of “an outlandish garment of my own devising” (Melville, White-Jacket)—isn’t it ever so? For some days now, thinking, too, of Melville’s late (1888) prose-sliding-into-verse piece “John Marr” with its “lone-hearted mariner” stuck amongst an inland bunch—“hard-working endurers of the dispiriting malaria—men to whom a holiday never came—and they had too much of uprightness and no art at all or desire to affect what they did not really feel.” Marr’s attempts out there in the prairie (with its “long, green, graduated swells, smooth as those of ocean becalmed”) to recount a story (“to divert his own thoughts from sadness, and in some degree interest theirs, by adverting to aught removed from the crosses and trials of their personal surroundings”), to “slide into some marine story or picture”:

. . . would soon recoil upon himself and be silent, finding no encouragement to proceed. Upon one such occasion an elderly man—a blacksmith, and at Sunday gatherings an earnest exhorter—honestly said to him, “Friend, we know nothing of that here.”

And (what I keep thinking of):

Such unresponsiveness in one’s fellow-creatures set apart from factitious life, and by their vocation—in those days little helped by machinery—standing, as it were, next of kin to Nature; this, to John Marr, seemed of a piece with the apathy of Nature herself as envisaged to him here on a prairie where none but the perished mound-builders had as yet left a durable mark.

The “apathy of Nature”: my dog—lacking any robust sense of factitiousness—woofs no notice of any “garment of my own devising,” the trellis’d wren continues its insipid liquid song. (I think of Stein’s “I am I because my little dog knows me,” late dog-agency skint’d out of its original “What is a sentence for if I am I then my little dog knows me” (in How To Write, 1931), wherein—as Ulla Dydo’s noted—“the ‘I,’ not the dog, is the agent of recognition and identity.”) Dydo also quotes (in Gertrude Stein: The Language That Rises, 1923-1934) lines out of Stein’s How Writing Is Written manuscript, talking about how “When the success began and it was a success I got completely lost”:

So many people knowing me I was I no longer and for the first time since I had begun to write I could not write and what was worse I could not worry about not writing and what was also worse I began to think about how my writing would sound to others, how could I make them understand, I who had always lived within myself and my writing.

Success itself—it, too, “lacking any robust sense of factitiousness”—become the agent of identity. Between the two, Melville’s word-annulling “apathy” and Stein’s success that “was a success”: mean row to hoe. Apropos: Bernadette Mayer’s endlessly repeatable admonishing (in these days of careerist-bleating): “Work your ass off to change the language & dont ever get famous.”

Alert’d by correspondent Robert Gibbons to the William White-edit’d three volumes of Whitman’s Daybooks and Notebooks print’d circa 1978 by New York University Press. Volume III’s full of Whitman’s notes about words (“Words,” “The Primer of Words,” “Other Notebooks, &c. on Words”—things glean’d off stray papers, lists of words, &c.) (Too, it prints a “Diary in Canada” and a few scant pages of “Autobiographical Notes.”) Out of “The Primer of Words”:

In most instances A characteristic word once used in a poem, speech, or what not, is then exhausted;—he who thinks he is going to produce effects by piling freely using strong words, is but a ignorant of words.—A great true composition in words, is returns the human body, male or female—that is the most perfect composition, and shall be best-beloved by men and women, and shall last the longest, which slights no part of the body, and repeats no part of the body.—To make a good great perfect composition in words is more than to make the best building or machine, or any the best statue, or picture. . . .

Loud Whitmanic chord pound’d (elbows flung out to bang the keyboard). Within it a small reverberant note continuing (driving itself wedge-like) into Williams’s: “A poem is a small (or large) machine made out of words.” I doubt Williams’d seen the note, though Horace Traubel’d printed the material in 1904 in An American Primer, by Walt Whitman, With Facsimiles of the Original Manuscript. Edition of 500. (City Lights reprint’d that in 1970.) Notable, too, lines out of Traubel’s Foreword, wherein he claims to quote Whitman (referring to the Primer material):

“This subject of language interests me—interests me: I never quite get it out of my mind. I sometimes think the Leaves is only a language experiment—that it is an attempt to give the spirit, the body, the man, new words, new potentialities of speech—an American, a cosmopolitan (the best of America is the best cosmopolitanism) range of self-expression. The new world, the new times, the new people, the new vistas need a new tongue according—yes, what is more, they will have such a new tongue—will not be satisfied until it is evolved.”

“Language experiment.” Thus the hours, shed of the niggling sun, get spent. 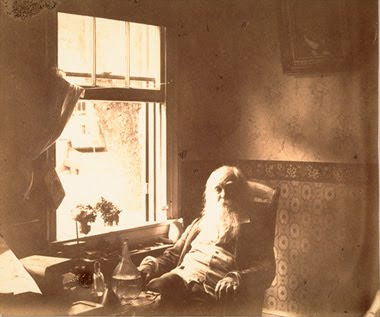