Never wholly moved by Creeley: the mastery of enjambments seem’d mere—and pointlessly minimal—technique, ontological querying the concern of a fussbudget. I look’d to excess, coo-coo rococo like the jimmy-French rooster who sings out a cocorico. That kind of thing. Reading, though, the pieces collect’d in the Donald Allen-edit’d Contexts of Poetry: Interviews 1961-1971 (Four Seasons Foundation, 1973) and the Ammiel Alcalay-edit’d Lost & Found booklet, The 1963 Vancouver Poetry Conference / Robert Creeley’s Contexts of Poetry With Daphne Marlatt’s Journal Entries, I find myself confront’d with some less crass redoubts, some urgings to reassess. (Gulp.) Though: Creeley’s talk / exchange (Ginsberg is a minimal interlocutor of sorts) at the Vancouver gathering (July 24, 1963), is a strange piece of work, a confessional of an attempt to accede to something beyond a neurotic need for command and control. Creeley’s “Contexts” is largely concern’d with the technologies of writing—the means of putting it down:

I write always with a typewriter. I get very nervous about using a pen, because pens run out of ink in a way . . . ball points are what I would use, as and when I do write that way . . . pencils have to be sharpened, I get so involved with the sharpening of the pencil. Also, I think it goes back to a sense I had when younger, that typewriters, typewriting, implied a “professional” context. If you were going to be serious, or going to claim seriousness for yourself, the instrument that you used in writing had to be particular to what the act of writing was. So that I had, I think, a basically naïve sense of this kind. I wanted to be able to do it with a typewriter. Now, equally, I never learned to type. So I mean my typing is a habit that’s developed, with two fingers. I never took a class in high school or any other place that taught me how to use the full, you know, all your fingers when you’re typing. Think again—that begins to be a qualification of how fast I can write. In other words, I find that the pace of my writing is concerned with the speed with which I can type. Now, I can type actually about as fast as I can talk, with two fingers. I find, for example, if I have to work on somebody else’s typewriter, I’m displaced, because there may be a slight variation in the space between keys. I find that now I can use the typewriter I do use without looking at it, so that I can be thinking of something without consciously wondering where my fingers are. I find . . . let’s see, I want to keep on a little bit in this sense of what the physical conditions are . . . because again, I started writing in a context where I was embarrassed. I didn’t want to bother anybody. I didn’t want, you know, like, don’t mind me, but just go right ahead with what you’re doing, with your serious business, with your serious preoccupation. I was primarily in a former marriage, and the problems thereof . . . I didn’t want to call attention to myself, because doing that might force me to define what I was trying to do—which is obviously impossible. So, the next thing I would do would be to create a context in which there was a residuum of noise, constantly present. So that my own noise wouldn’t be intrusive. . . .

(Version out of the Allen-edit’d book—it differs in a few minor particulars, compared with that of the Lost & Found document.) Lengthy quote: extent of Creeley’s mania for a workable order and method. The upshot: a belief that “particular habits of writing . . . have, curiously, a great significance” for what one writes (“If you think I’m fooling, you might for example try to see what happens if you write with different kinds of media. In other words, try writing with large crayons. . .”) (A rather superstitious attitude that continues to be purvey’d—see numerous remarks in Ron Silliman’s talk about writing technologies here: “Using two different journals with the same pen will yield very different poems . . .” or “Writing on the bus—I was using legal tablets—was an exceptionally liberating experience for me. Later when I bought my new machine, I typed up the manuscripts and discovered that every single text I’d written came to a single page, typed single space. I had really internalized that frame without realizing it. From that point forward, I started to make notebooks part of my practice . . .”) (What internal “frame” determines receipt? That is, is a poem print’d in Helvetica in a journal going to differ compared to the same poem print’d in Goudy in a collect’d edition?) Creeley, in a postscript to the talk, some five years along (April 14, 1968), at the occasion of the thing’s printing in Audit:

The preoccupations here evident were, in fact, more decisive than I could then have realized. I had trusted so much to thinking, apparently, and had gained for myself such an adamant sense of what a poem could be for me, that here I must have been signaling to myself both a warning and the hope of an alternative.
Not too long after I began to try deliberately to break out of the habits described. I wrote in different states of so-called consciousness, e.g. when high, and at those times would write in pen or pencil, contrary to habit, and I would also try to avoid any immediate decision as to whether or not the effects to such writing were “good.”
. . . I also began to use notebooks, first very small ones indeed, and then larger—and I found many senses of possibility in writing began consequently to open. For one, such notebooks accumulated the writing, and they made no decisions about it—it was all there, in whatever state it occurred . . .

(That refusal of assessment, akin to Williams’s defiance in the Prologue to Kora in Hell: Improvisations: “There is nothing sacred about literature, it is damned from one end to the other. There is nothing in literature but change and change is mockery. I’ll write whatever I damn please, whenever I damn please and as I damn please and it’ll be good if the authentic spirit of change is on it”—and in some sense, Creeley’s “scribbling . . . writing for the immediacy of the pleasure and without having to pay attention to some final code of significance” is what is noteworthy, beyond the notebook sizes, &c. Some of the poems so written” become part of Words (again, one thinks of Williams, how, in editor Webster Schott’s words—in Imaginations, regarding Spring and All—“a fooling around book” becomes “a crucial book.”) (Exceeding affection in the world for one’s own “fooling around” work: see the innumerable mentions of the happy malarkey of “Instead of ant worts I saw brat guts” chez some of the Grand Pianists.) Creeley’s examples:

One and
one, two,
three.

They were trying to catch up.
But from the distance

between them, one thought
it would be a long time

even with persistent
running. They were walking

slower and slower
for hours and hours.

And (preternaturally lovely, the way Lorine Niedecker’s work is):

Tips of celery,
clouds of

One notes, though, that—except perhaps for the audaciously minimal “A Piece” (forewarning of “Numbers” in Pieces)—there’s little to earmark the poems as particularly different, or broken out of Creeley’s habitual. 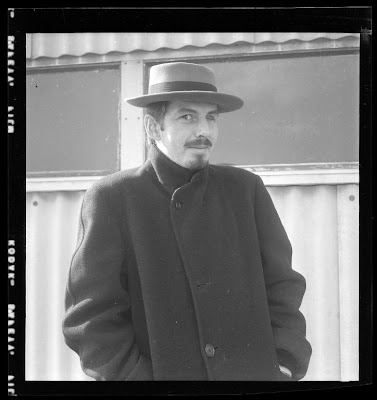