The difficulty: to capture the nature of the amass’d, succeedingly add’d particulars (without simply redoing the whole). The book: Marcia Roberts’s Autumn’s Slant (Effing Press, 2009). Some random “captures”:

the one who carves notches in a coral plank sings

it is winter
troops in Mosul die at their meal

Mother and I see JFK the day he dedicates the Oahe Dam. His
motorcade drives by the intersection where we wait to get on
the paved road. He stands in the Lincoln convertible and waves.

The day he is shot, mother breaks the news to Dad, who says,
“Why? That boy never hurt anyone.”

Something completely disarming about the voice here: a whole mix of registers—innocent, undaunt’d, discerning, opprobrious, funny—that allows a seamlessness to the “framing” (and makes the writing seem hardly “difficult” at all). Hence, the radiant combo of percepts personal and political, a diffusing of the all throughout (see Pound’s “All ages are contemporaneous” in The Spirit of Romance—Roberts’s book is construct’d of four cantos: a series of bags capable of being endlessly fill’d, or extend’d by new cantos: the fust imperator in me says: do it)—the words of El Cantar de M ío Cid entangling the anonymous ditty “It Ain't Gonna Rain No More,” exactly the way crying entangles laughter (or “prickly pear blooms” become interchangeable with “rust splotches,” the naked maja’s “face and mouth” transform into a “grotesque mouth.”) ¡Así hagamos nos todos         justos y pecadores! = So do we all       the just and the unjust! The echoes of El Cid throughout (Canto I carries the epigraph: “estas son las nuevas         these are the deeds”) make for a ready trajectory—the incidents of a life (in all its legendary meagernesses and / or horrifying public impingements) and, in Roberts’s case, provide a parallel / counterpoint to the vaquero-story’d place (“en este lugar . . . / there is no goodbye”)—the American West—of the piece.

A sense of endless lament—for the lost, the dying, the country’s old ways—pervades Roberts’s work (combat’d by: screwy humor). Effing Press’s Scott Pierce sent a copy, too, of Roberts’s In the Bird’s Breath (Effing Press, 2009), a sequence that’d seem “of a piece” with Autumn’s Slant, a sequence looking to find its place in a trajectory of one grand writing. In its final part—“(an epilogue)”—Roberts writes: “I may be the last of our kind. a field of goats, an uprooted tree, and Texas is green. André Gide said poets should never use therefore . . .” And, earlier: “one can grieve for a landscape, a day in Segovia, dinner at Viejo Leon. this grief is not staccato. it is lento and soft . . .” Against the quotidian anarchy and mischievous (serious) interrupt of:

the army doesn’t want you
to have a tattoo
my advice: get out and get one fast

you ordinary citizen, you know
you can survive a shotgun blast

(And: wry counter to a “homeland”-secured epoch whence “ordinary citizen” seemingly equals “expendable, discard”: “a sign on the light pole tells us ‘Venom is more important that you.’ I am not disheartened by this missal because I’ve been told that I’m an ordinary citizen.”

A final note. That Marcia Roberts is unmistakably a woman writing (and the different “catch”—meaning what, entanglement, anchor, snag, acquisition?—of “woman writing,” of being caught in a succession of making women / made offspring) seems perfectly put in two couplets (out of Autumn’s Slant) present’d (pure unostentatious stripped-down joy, and deflating, marvelously retrograding grief) on facing pages:

the beauty of the daughter overwhelms her
she wants the child to be her art, herself

when the mother dies, the daughter is 54
she looks and feels twelve 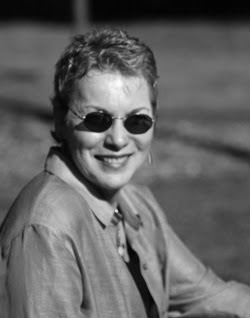