Humidity’s way of making one irresolute (meaning insipid and washy, or wash’d up?) I keep poking (with unsatisfactory consequent, or none) about in whatever various J. H. Prynne “items” I am able to muster. For rhetorical ferocity (one’d think it aim’d “at” the ready consumables of la poesía norteamericana, Flarf command), there’s a paragraph (out of Prynne’s “A Letter to Steve McCaffery”—dated 2 January 1989, print’d in 2000 in The Gig #7). Prynne’s admitting—regarding McCaffery’s “Lag”—that he is “more interested in the implicit constraints for the production of this text than . . . in the personal experience of its consumption”and (of the 1987 Evoba: The Investigations Meditations 1976-78) that it “seems . . . to set indexed margins for resuming the possible field for a consequent or secondary consumption, the consumption of how it would be produced” seems apt matériel de guerre utile for combating the actual longueurs of such trivial assemblages as’ve become the marvels and commonplaces of the age. Prynne (for “fascination”—commentators never tire of pointing to its mutual rootedness with fascēs, meaning “bundle,” stem, too, of “fascicle” and “fascist,” whether there’s any truth there or not—for “fascination” read the much-vaunt’d “hilarity” spout’d routinely at headquarters):

As for fascination, that’s a helotry chiefly reserved by snakes for rabbits, which is why the TV screen which looks like an emission surface is clearly an engorged sink for even partial variability of attention, consuming viewer intelligence by homogenising and neutralising its interface. Well and truly is the fetish of value avoided: the first stage being to attach that first noun to the second, so that the one can then replace the other. Yet trivia and profundity mingle constantly but don’t “naturally” blend, because the activity they jointly provoke is adversarial and mediated by valuation; but a trivial emulsion can be induced to form by use of apt detergent, e.g. “humour” as you put it, thereby further reducing value to fetish. I for my own part have a positive addiction to the meanest trash and to unmitigated urban pollution; but uncontrolled, self-replicating triviality is genteel and necrotic, a true language-cancer and well able to invade across the mind / brain barrier.

“Genteel and necrotic”—there’s considerable integrity in that slap. Uncover’d a fine essay call’d ‘his brilliant luminous shade’—Ian Brinton on Dorn and Prynne—in the Brinton-edit’d A Manner of Utterance: The Poetry of J. H. Prynne (Shearsman, 2009). Brinton quotes lines out of Prynne’s “A Gold Ring Called Reluctance”:

And so slowness is
interesting and the dust, in cracks between
boards. The old ones have their senses
in the elegant droop they sometimes con-
trive, the knowing falter that makes it
all like some trick. Fluff, grit, various
discarded bits & pieces: these are the
genetic patrons of our so-called condition.

And, with identical notch’d purposefulness, lines out of “In the Long Run, To Be Stranded” (The White Stones, 1969):

This isn’t a wild comment: there’s no
good in the brittle effort, to snap the pace
into some more sudden glitter of light:
hold to this city or the slightly pale
walking, to a set rhythm of
the very slight hopefulness. That
is less than patience, it’s time or more clearly
the sequence of years; a thickening in the words
as the coins themselves wear thin and could
almost balance on the quick
ideal edge.

Brinton ably registers a connection in the poem between “movement (tread) and the exchange of commodities associated with ‘trade’”—and discerningly notes “the filling out of language that almost clogs the tongue.” (The “clog”—and how it slows (and eventually) prohibits fluidity—is that a point’d Prynnean concern? Is it a way of approaching the high-density artifacts of the later verse? In the Prospect review of the Douglas Woolf novel, Fade Out,Prynne talks about the rhythms of Woolf’s narrative: “the earlier life in New York is depicted in great density of detail, which clogs it and weighs it down to a standstill.”)

And, later, reading Dorn’s By the Sound I am struck by Dorn’s own “walking, to a set rhythm / of the very slight hopefulness”—Carl Wyman’s job in a silo:

The work consisted of walking around and around, tramping silage as it was blown into the top of the silo. The work was as uneventful and regular as that of a horse pulling a pole around a gear exchange to elevate ears of corn. . . . There was nothing to it, you simply got in the silo when it was empty and walked your way up, as it filled. Walking. That was all. At noon the men inside, usually three, climbed down the ladder on the outside, going through one of a series of holes which, as the silage piled higher, was plugged up with a wooden door.

Prynne’s line (out of “Thoughts on the Esterházy Court Uniform”) “With such / patience maybe we can listen to the rain / without always thinking about rain”—some “unassertively musical” grace of being—forks up out of that silage . . . Some bliss-fed days of inconsequential Prynne-reaving to come, I am certain. The early Agneau 2 (1982) Poems ends:

sick and nonplussed
by the thought of less
you say stuff it.

Being final curd in the whey of a sequence call’d “Down Where Changed” (1979)—with the epigraph: “Anyone who takes up this book will, we expect, have down so because at the back of the mind he has a half formed belief that there is something in it.” Out of C. Thorpe, Practical Crystal-Gazing (1916). 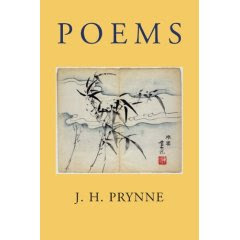