Dorn, in By the Sound, mining the speech of “transients,” its “abstract urgency,” meaning that “sidewise way they had of bringing up the most trivial issue, like how many miles away a town was, and endlessly tilting information until, no matter how plain, it had been made to show all its surfaces”:

Hey, you’re somking Dukes Mixture, let’s see the label. Yes I did hear that was named after Doris Duke, but I doubt if she smokes it. She might, she might, might roll ’er own, there’re some weird people, wear old cloths just like bums, fuck around in all sort of places you wouldn’t expect ’em to. You wouldn’t even know they were there. Well you sure as hell wouldn’t, every time I ever see you you got your eye on the sidewalk lookin for butts. Ya, well I wasn’t lookin for your goddamn clapped-up butt! I been keepin an eye out for Doris Duke’s butt. Well I’ll be damned, you think she ain’t got clap Maybe, maybe. If she has she got it someplace they sure as hell wouldn’t let you in, Christ! They’d throw your ass out of a place like that so fast what little brains you got left would arrive tomorrow on the slow freight, the conductor’d throw ’em off with his sandwich wrappers, shit! The depot flunky’d be out there with his broom and dustpan sweepin’ that mess up before you uncrossed your eyes and took your finger outa your ass . . .

What Dorn calls “the endless coprolalia” and the “wild accuracy of that foul, vented speech.” (Thinking how little of that is liable to accumulate in “our” post- i hate speech roarings, and where is one without that texture of nigh-preordain’d (rule-bound) hard-sass speech of the ones the system itself’s trash’d and abandon’d? Dylan’s line about how “a pounding on the walls” must be “Don Pasquale makin’ a two a.m. booty call” intercedes—lingo largely in absentia in the rarefy’d world of la poesía norteamericana.) Of the transients in By the Sound, Dorn notes, too, “the sturdiness of their resignations,” admitting that “it had a quieting effect on him because there was a deadly sophistication about it, he thought of them as pure scientists inspecting their own isolated condition. It was a ritual for them to explain to themselves with an antiseptic sense of duty every one of the reasons they should not accept a job just offered before they took it”:

You know, we’re gonna get out there and that bastard’s not gonna be ready to start whatever pissy-assed little chore he wants us to do and you know he’s not gonna pay until the minute we start, and when he does he’s gonna give us some phony personal check he wrote out with a stubby little pencil he licked he looks that stingy and they ain’t gonna wanta cash it at the Baseball, unless you’re lucky enough to have a tab to pay off then they’ll take it even if it’s bad those greedy sonsabitches.

Pre-sullen bowing to the chore, the inevitable bravado, that irrepressible shine of defiance and self-worth caught up (expulsed) in reckless speech. It admits a range (of experience, and of community) hardly approach’d by the self-appoint’d adjudicators of communitas (and its delinquents) in the rarefy’d world of &c. (Continuing—one guesses—an argument for less formal “triviality and meanness” (the squinch’d off poverty of style the post-language get-go’s got going) and more “real language” (recall Dorn’s lines in Yellow Lola: “Listen, if anybody out there’s / saying, you know, there’s / something new, and something / else or other’s not, well, / they should look it up.”)

I see Dorn—in “The New Frontier,” the early (1963) note regarding Douglas Woolf’s work—quotes “one of the few commentary passages” out of Hypocritic Days (1955)—that title’s out of Emerson’s “Days”:

Daughters of Time, the hypocritic Days,
Muffled and dumb like barefoot dervishes,
And marching single in an endless file,
Bring diadems and fagots in their hands.
To each they offer gifts after his will,
Bread, kingdoms, stars, and sky that holds them all.
I, in my pleachèd garden, watched the pomp,
Forgot my morning wishes, hastily
Took a few herbs and apples, and the Day
Turned and departed silent. I, too late,
Under her solemn fillet saw the scorn.

—the day’s dervishings routing one’s unadorn’d wishes, and with scorn!—:

Loneliness is like the common cold, a contagious disease which we catch in public places and suffer in privacy. We turn from a man’s loneliness as instinctively as we turn from his sneeze, but his germ overtakes us easily. We carry it home and doctor it with old remedies, all patently useless: there is no known cure for loneliness. The best we can do is to give it to someone else. Just as soon as we observe our symptoms in another, our own become less severe. Now let him look for someone else to pass his to, for we have developed an immunity. In a week we’ll be feeling fit again, and an old man will die of unknown cause in Buffalo.

Recalling, somewhat—that mooting of severity caused by witness, that is, by “reading”—Walker Percy’s claim in “The Man on the Train” (in the 1975 The Message in the Bottle: How Queer Man Is, How Queer Language Is, and What One Has to Do with the Other) “There is no such thing, strictly speaking, as a literature of alienation. In the re-presenting of alienation the category is reversed and becomes something entirely different. There is a great deal of difference between an alienated commuter riding a train and this same commuter reading a book about an alienated commuter riding a train . . . The nonreading commuter exists in true alienation, which is unspeakable; the reading commuter rejoices in the speakability of his alienation and in the new triple alliance of himself, the alienated character, and the author. His mood is affirmatory and glad: Yes! that is how it is!—which is an aesthetic reversal of alienation.” Or, in Woolf’s 1971 novel Ya!—reprint’d in Ya! and John-Juan (Dalkey Archive, 2002), the dolorous affirmatory chant of trucker Joe Day, “settling down”:

Of course: it’s the story of stories here (still) in the misbegotten West, no book need’d. Dorn: “An open ear is the most valuable instrument a man can have out here.” And Percy: “It is related that when Kafka read his work aloud to his friends, they would all roar with laughter until tears came to their eyes. . . . To picture a truly alienated man, picture a Kafka to whom it had never occurred to write a word.” 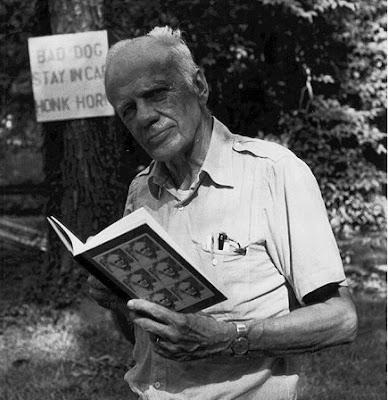