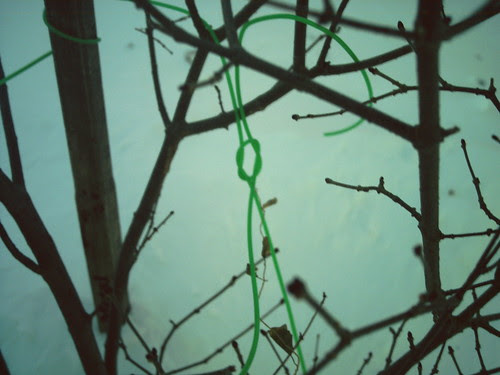 Emerg’d out the lit-up end of the solstick tunnel unscathed, my rapier unbedaub’d, my mechanical pencil screwing up a fresh lead impeccably. All by a strategy of keeping the brain-box down, skirting the roadblocks, calling the dog with a piercingly inaudible noise emit’d out the gap in between my teeth. One day I wrote two and one half lines of Kochian extravagance: “The levee is unfinished, the muddy machinery stilled / By wildcat strikers. The Senegalese place-kicker unlaces one boot. There’s a racket / In the tomato patch, or what’s left of it.” And decided that’d be enough of that. Always good to leave off one’s most blessèd idiocies for a spell, some unsuspect’d inchoate irrupting, Donner party and blitzkrieg, eat alone out of one’s own shabby hat for a term. Then the snow fell down around the boot tops, beat the privet hedge to an unsightly sprawl, icing-up its undergarments. And out the lusty shovels got.

The reading front: nigh nothing. One big-ass biography of Byron, Benita Eisler’s. Why, I do not know. To see how Byron’d use “qualmish” in a sentence: “I shall be very qualmish at the thought of returning to town—it is an accursed abode for people who wish to be quiet.” To see how Byron got a century and a half jump on the Ginsberg’s “first thought” formula, writing that “in composition, I do not think second thoughts are the best, though second expressions may improve the first ideas.” Splitting hairs, peut-être. (I am took, too, by Byron’s claim to write in order “to dispel reflection during inaction,” sign of automatism, sign of the intransigent Martian radio receiver stance’s kinship with narrative invasiveness, Byron turning to, tuning into the “outer.”) To learn how, according to one contemporary, the younger Byron’d “instantly jump out of the window to avoid” unknown visitors. Oop la. Or how, at Cambridge, he kept, briefly, a bulldog by the name of Smut (later replaced by “a tame Bear). (Too, a Newfoundland, name of Boatswain.) Or how, in Albania, the Ottoman vizier Ali Pasha pronounced Byron a man of high birth because he had “small ears, curling hair, & little white hands,” and how Byron and pals took in bit of shadow puppetry “featuring a hero possessing an enormous penis supported by a piece of string hung from his neck.” Byron report’d that said hero “held a soliloquy addressed to the appendage alluded to, which he snubbed most soundly with his fist . . . a prelude to the devil descending & removing this engine from before & affixing it to his posterior.” “Engine.” “My engine.” Or how Byron refer’d to verse plays as “mental theatre”—akin to Philip Whalen’s poem as “a continuous fabric (nerve movie?)”? Byron’s swimming feats: in the Tagus, a three miler, Lisbon down to the château at Belém; the “more than four miles” of the Hellespont. Some of the things he return’d to England (in 1811) with: “two Greek servants, three live tortoises, four Athenian skulls, and a vial of Attic hemlock.” The Byronic claim that Childe Harold “was intended to be a poem on Ariosto’s plan, that is to say on no plan at all.” How Byron, inveterate dieter, against hunger pangs chew’d great wads of mastic, a gum resin distill’d of pine tree sap. How priggishly and disturbingly he hated the waltz. How he wrote: “No one should be a rhymer who could do anything better.” And, like Williams, hated the sonnet: “I never wrote but one sonnet before . . . as an exercise—and I will never write another. They are the most puling, petrifying, stupidly platonic compositions.” All—meaning all that undutiful (lazy) reading—one thinks idly, prepping for one’s own manic “Ariostoian” rout unplanned, the one that’ll commence with its own Byronic dedicatory blurt—Byron’s is to Robert Southey, former radical gone Tory. I’m particularly fond of the third stanza:

You, Bob, are rather insolent, you know,
At being disappointed in your wish
To supercede all warblers here below,
And be the only blackbird in the dish.
And then you overstrain yourself, or so,
And tumble downward like the flying fish
Gasping on deck, because you soar too high, Bob,
And fall for lack of moisture quite a dry Bob.

Think of it, a blast with a maugre lilt, commencing thus:

Ron Silliman! You’re a poet, a post-avant,
A representative of men in pants.
And though it’s not necessary to taunt
The common store-bought jean, denim in France
Is made in Nîmes, that abstract lyric haunt
Of Roman desuetude. There’s little chance
That’d shine against your drab imperium:
What’s not New American is tedium.

Something like that. With an annuarium of several hundred pounds, a ruin’d abbey and a few ruin’d Lady procuresses, I could likely crank out some hundreds of them.

And—reading report again—one late night charge through David Markson’s early (1959) hack (writ for money) work, Epitaph for a Tramp. Which—even then—shows Markson’s predilect for the textures of literary history that bloom up in the later novels. Here, Harry Fannin is a T. S. Eliot-reading private investigator, one who turns peckishly to Bartlett’s Quotations the way Philip Marlowe turns to the bourbon in the drawer. Quoting, say, Thomas Hobbe’s thing about man’s life being “solitary, short, brutish, nasty, ill-advised, and estupido” or howsoever that goeth. Amongst the characters: one Henry Hiram Henshaw, the sidekick to a jazz musician. Henshaw talks some gumbo of hepcat and faux-Byronic lackaday. Like (Henshaw replying to queries regarding what the expired lady tramp in question’d said to jazzman Arthur Leeds during a brief visit on the evening of her expiry, and what Leeds’d done subsequently):

“Like who listened? Like she whispered to him a minute and then she gave him a gander at something she had in this reticule. That’s a sack, Jack . . .
“Man, how can I blow this tune if you keep standing on the score? Like sure, I saw Leeds again. But, man I ain’t come to that part yet. Chapter three, book sixty-four, verse nineteen, brought to you by Welch’s Grape Juice. You know? Like I say, first she blasts off in this MG bomb. I’m maybe five pads up the block and I’m debating. If Leedsie flubbed the dub with the chick, maybe we can dig that Mills record one more time. I’m still giving the matter considerable ratiocination when he bounces out the front door like some cat set fire to the joint and who’s got the gauze, you know? He’s got his Dodge across the road and zoom, he’s off like a tall bird. And I am alone in the still night.”

Which is middling amusing. What one is curious about is, is that a transcript of the era’s speech, or a mockery of it, or a mockery of how it may’ve got report’d in, say, Life magazine, or through the Dobie Gillis sidekick, Maynard G. Krebs? Hard to say what level of pre-postmodernist simulacritude one’s getting estupido about here. Alors. 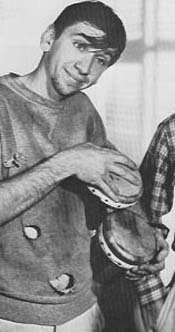