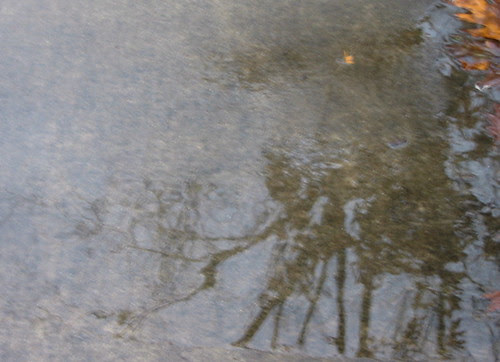 Slowly my various Zukofsky books assemble around the table, fetch’d forth, handy. It’s one thing a good biography is for: to point one back, renew’d, into the works. So, out of A Test of Poetry, one notes Zukofsky’s remarks about difficulty:

The less poetry is concerned with the everyday existence and the rhythmic talents of a people, the less readable that poetry is likely to be. But the forms of particular communication—which are necessary enough for a varied life—may never, in any society, be absorbed as automatically as air.

Manic stray axioms assemble too: “To live as variously as possible” and “beauty is difficult” and one looks to the folk-jig mimickry of the Thomas Hardy poem Zukofsky is pointing at cleansed of all pretense:

Yes, she is nearing,
Nearing, nearing,
Weather unfearing
To come to me.

Thus another continuum is put forth, innumerable smear of plausibles—not unlike the one stretching speech into music. Here, cadence, the everyday, the “people” pour forth in several arcs and arc-lets to reiterate in becoming various, particular (removed), “societal,” air. Zukofsky’s limit structures (functions, integrals) are pleasing and amenable and useful for the very wide swath of includables cut, and kept.

Le style Zukofsky. One thing Mark Scroggins points out in The Poem of a Life is just how “marked . . . by tense, crabbed, and clotted syntax” and “relentless intellectual abstraction” Zukofsky’s prose can be. “It is as if Zukofsky’s primary poetic impulse—to condense—when translated to the more expansive medium of exposition, produced prose from which not merely the connectives, but the particulars themselves, had been squeezed.” Scroggins reports a terrific exchange with Pound regarding “clarity”—after Zukofsky’d sent a copy of The Writing of Guillaume Apollinaire (the Taupin / Zukofsky scam-project, design’d mostly, it seems, to get a little of Taupin’s Columbia University salary into Zukofsky’s hands) to him. He quotes Pound’s reply:

I don’t know if it is YOU or René / BUT in anny kase you MUST now at once start on study of technique of FLOW. As I may have said [:] I started after Tacitus and did learn a bit about concentration / BUT AFTER that you have . . . to go out for the NEXT step / which is clarity /

Scroggins, LZ-laconic: “Zukofsky didn’t seem to get, or want to get, the hint: “clarity, in my handy dictionary,” he replied, “has two lines after it, so: ||. Which means archaic.” (I suspect I’d argue that Zukofsky’s prose-crabbedness is the result of trying to keep possibilities open—precisely to the “particular communication” that is not “absorbed as automatically as air.” That is, density, ambiguity, tangled syntax, all of that admits to continued looking and incompletion in lieu of clarity’s easy wholes. Next (rootless fossicking the surrounding volumes), I get bogged down in Aristotle quoted in Bottom: on Shakespeare and think I’d connect the LZ-prose-clench to duration: “Seeing seems to be at any moment complete, for it does not lack anything which coming into being later will complete its form . . .” (Ethics, X, 4) The question being, simply, how to write like seeing—seemingly complete, always liable to completion? Or: one attempts a writing as complete as seeing’s moment, and as unfix’d.)

Back to the biography. Stunned by both the extent of Zukofsky’s 1933 travels and contacts in Europe (through Pound he met both Constantin Brancusi and Fernand Léger, two out of a longer list he tend’d only perfunctorily to) and the apparent lack of enthusiasm for the place. Scroggins reports how, in Budapest with violist and composer Tibor Serly, Zukofsky, interview’d by a local newspaper, “claimed not to be much interested in Europe; he was there ‘chiefly to meet the master of American poetry and in some sense its father, Ezra Pound.’” (Report of the Pound / Zukofsky “Papa” / “sonny” epistolary salutes is a little cringe-making.) And, too, how disappointingly aestheticist Zukofsky’s poetics apparently sound’d to the interviewer—“above socialistic problems and class struggles.” Zukofsky’s remarks, iterated in terms of those poets (“we”) “broken with the known, customary, successful, banal forms,” point first to staking out a melopœic plot (against pomposity, against muzzy impermanences) in the wilderness, and seeing comes second:

. . . we tend to write an expressive and musical verse rather than a magniloquent one. We seek the plasticity of words and their interrelations and musical connections rather than their denotations. We look for actual beauty (value) and not for atmosphere.

Scroggins details, too, how, in leftist circles in the Depression-wrack’d U. S., where a “simplifying aesthetic, whose ultimate goal was rhetorical: to move the work’s reader to political action,” such a stance’d be greet’d with dismissal. Indeed, New Masses editor Mike Gold insist’d that such “verbal acrobatics” were “only another form of bourgeois idleness.”

I love the tiny story of Zukofsky’s rather unworldly suggestion to Basil Bunting—who’d “arrived in New York, carrying a sextant and sporting ‘yeoman muscles’ from a year of living alone on a six-ton sailboat, wandering around the coasts of England”—that he “might work for Lorine Niedecker’s father, who seined carp” in Wisconsin. I like to think how literary history might’ve changed.