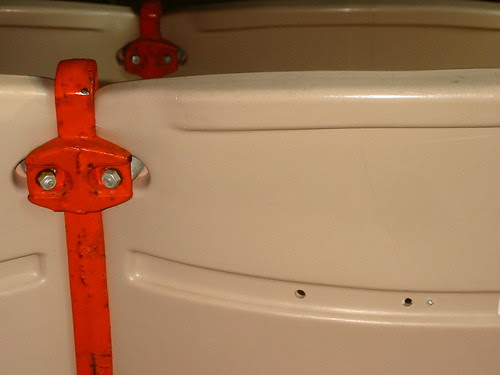 Troubling the practice of sewing figures into the embroidery of a piece, numerical feints leaving faint traces, Joyce’s numerology, Zukofsky’s counting of n’s and r’s in parts of “A”-8, work difficult and largely invisible—Mark Scroggins says, “Zukofsky could not have expected any reader to detect the working of these mathematical underpinnings when reading ‘A’-8”—alors (to use the lingo of a French thug), what’s the point? And quoting Hugh Kenner’s reasoning that “Such hidden laws, presenting a different face to the poet and to us . . . suspend the whole poem on some plane other than the plane of unresisted discourse, much as musical laws, though we may not know what they are, yield effects we do not confuse with random sonority.” Or, we note a something without pinpointing its source, subliminal mischief, the movie frame that singes by “unseen” to send one suddenly off to get popcorn? Though: if one’s Zukofsky, the “sonority” of the result’s just one thing to consider—another’s how the obstacle—Cagean, where is it that Cage more or less labels art the “giving of oneself instructions, and carrying them out”?—provides a resistance, a constraint, a “self-appointed challenge.” Scroggins is exactly right in noting that the use of mathematical formulae (the numbers of n’s and r’s drawing on “the calculus of a curve,” a kind of acceleration / deceleration series) is “in the purest sense an experiment at finding, new, potentially productive structuring devises for poetry in English, just as the Italian sonnet form must have seemed revolutionary to sixteenth-century English poets.” Experiment of such complexity and originality’s to put the wan mechanical impertinences and repetitions of today’s dime-a-dozen “experimentalists” to the dogs, he ought to’ve added. (To note: Cage’s mesostic stanza out of “Composition in Retrospect”: “aCt / In / accoRd / with obstaCles / Using / theM / to find or define the proceSs / you’re abouT to be involved in / the questions you’ll Ask / if you doN’t have enough time / to aCcomplish / what you havE in mind / conSider the work finished.”)

The unfettered (other) side of Zukofsky, the “without obstacle”: horses. Thus, in a letter to Babette Deutsch, Zukofsky’s line calling the “human imagination . . . a kind of uncontrolled horse itself.” (One terrific Scroggins “interchapter” is titled “Numbers and Horses.”)

Alors, Sunday’s work incomplete, the assemblage of Zukofsky notes accumulated lifting sweet voices in protest (and waving white hankies), one leaps aback one’s current swayback vehicular beast (I love to overdo it) and drives into Detroit, an uncommon trajectory. And is spit out into a tangle, immediately lost (a little lost), that’s how it goes in the Motor City, rare dominion of empty red sandstone beauts and boulevards too wide for a sparse populace. Happy to find myself driving along Aretha though (a little lost), one of a number of Motown-monicker’d streets, and found the sought orchestral hall in plenty. James Ehnes playing Samuel Barber’s Concerto for Violin and Orchestra, Op. 14. Peter Oundjian conducting the Detroit Symphony Orchestra doing Dmitri Shostakovich’s “Leningrad” Symphony (No. 7 in C Major, Op. 60). The latter mostly composed in 1941 amidst the siege of Leningrad, boisterous and tender, notable for a crescendo—commencing Boléro-style with a banal and repetitious little tune, it “achieves” only after ten minutes of continual pilings up. There’s a scratchy little sarcastic circus music attack in there, sinister, implacable. Shostakovich points somewhere to its being “a polemic against the statement that ‘when the cannons roar the muse is silent,’” and to the midriff (intermezzo) of the piece’s trying “to express the thought that art, literature and science must advance in spite of war.” Truth is, I listen to music with a dodgy sense of approbation and an idiot’s sense of fun. I tap my foot. I decide one cellist is a shoo-in for Kenneth Rexroth, and equally anger’d by the world. If asked anything, sure am I he’d politely reply: “I would prefer that history’s / Senseless wheel ran down and the wheel / Of man’s appetite that wants to / Go on spinning for ever, stop.” And one’d know to (politely) back the f— off. I convince myself one violinist’d pass for Virginia Woolf in a pinch, high-vault’d brow, a look quizzical and constern’d, oyster-watery eyes. The cranial sweep liable to contain star-systems, odd planets, new musics made solely of arrangements of stellar debris. I see monks in brown rough-cloth robes attack’d by clowns, the red-complect’d and dwarfish violists thumb-plucking madly. Zukofsky’s line about the “Stock / Opera House of vocables— / None of us wants to sit in it—” puts in a word, and, too, the (probably stol’n) fat truth of “The vowels / abide / in consonants / like // Souls / in bodies” out of the lovely zig-zag music of “4 Other Countries.” I doodle against a knee-propped note pad, “To tend / to naught but / the haec- / city time // emits, back’d / up into / a tight / spot.”