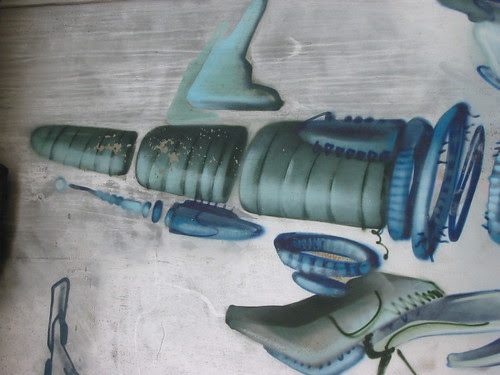 Easier to shoot my mouth
Off in a round of
Unassessed particulars, a stunt one’s
Pull’d a number of times
Before, rather than to go
Out looking for anything meatier
To grace the table with.
Meaning the three-foot’d baroque
Sprint with a burlap sack
Bagging one’s normal maneuverability is
Here in the offing, ready
To go, the dibble poised
Left, the seedling dandled right,
The tamp foot angled up.
Something of big opera circuitry
To the bent, the solar
Recklessness of inserting oneself into
A history of laborers striking
Out after the tenuousness of
Forage, planting oneself against interminable
Movement, hauling up the upright
Timbers of a house, a
Hat rack, something to thwart
Any too major weather. News
Is a Mesmer system, canny
Syllabary, something in the bushes
That won’t out. The king,
The dead king, the puling
Of the people, the tick’d
Off universals, one turn around
The track. O the magnanimity
Of one’s despair! O the
Collapsible fronds of one’s waving,
Just another palm tree off
Tweaking the distant light! The
Trick is not to believe
A tack of it, nor
The dumb thumb that keeps
Pushing it as if to
Attach a label under dread
Ægis of its naught. Picture
That. Picture the sanguine adulterate
Complexion of one’s sound indifference,
News crib’d off the shunned
Simplicities of wild criard angels.

Hoofing it through the mighty cold, the word swish attach’d to my one het-up neural ganglion, misfiring its rhythmical spit, some animal portion of my constitution grappled with Williams’s:

It is difficult
to get the news from poems
yet men die miserably every day
for lack
of what is found there.

To no conclusion. A newspaper’s good for stuffing in one’s boot to keep out the cold. Or keeping the smallmouth offal, hook’d with a thumb and tumbled out in a gleamy pile, off the countertop. And shooting off one’s lyrical cowboy mouth? I don’t know. A stunt of leisure? A story of one’s mere extravagance and superfluity? A utilitarian hat too big keeps falling over my opticks. What if that “what is found there” is the mere regal extirpt’d distillate of supposed helplessness? “I cannot help writing.” Insatiable ebullient graphomania, a potter’s field affliction. (I note the clumsy swing between the hint some regal “leisure” is such writing’s undercarriage, and the hint of the poorhouse upshot, any extreme a liability.) Susan Howe: “Prefaces are usually afterimages.” And, in a single paragraph, compleat: “variant unabridged bits, mortal and menacing, anything but pliable and apart.” Meaning: the hell with it, one writes oneself into a cage, one proceeds engulf’d and floody, blind’d by one’s own graphemes that mount, menaced by what is both lack and plenitude.

The hell with it. “Jack of Diamonds is a hard card to beat.” Texas bluesman Mance Liscomb—named after a man named “Emancipation”—with a bust’d digit and a jack-knife. Rheumy-eyed skepticism is never resignation.