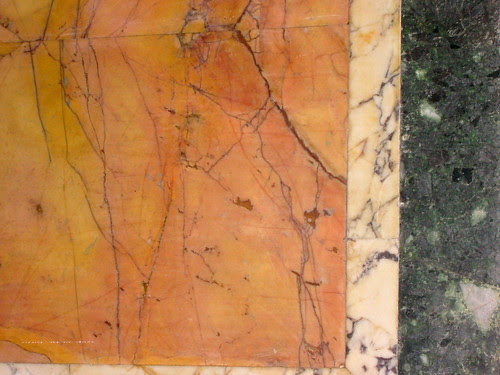 A Wall (Tigris and Euphrates)

Read Lawrence Rainey’s Institutions of Modernism: Literary Elites and Public Culture (Yale University Press, 1998), chapters on Ezra Pound’s copycat Blast-ing in response to F. T. Marinetti’s London provocations, and on the lucre-hoist’d offers to print T. S. Eliot’s The Waste Land unread and unseen, amongst others concerning the high-end marketing of Joyce’s Ulysses, Pound’s yearning for patronage bottoming out in Il Duce, and the effect of H.D.’s claustral coterie on her writing. All writ in a lively story’d style (“Stories are analysis—by other means”) with a fine Bourdieu-inflect’d sense of the cultural forces underpinning (or -mining) writerly intent and industry, and a strong turn to textual investigations and conditions. All almost alarmingly free of theory-pettifoggery and like abuses. One quotable of note regarding how the Vorticist Blast hit the cultural field and swamp’d in the wake of the Futurists:

Almost all the pictures reproduced are (like the typesetting of the first pages), Futurist in origin and nothing else. And as for the productions of the literary Vortices, these are not even so fresh as that. . . . All it really is is a feeble attempt at being clever. Blast is a flat affair. We haven’t a movement here, not even a mistaken one.

Mr. Pound used to be quite interesting when he was a remote passéist and wrote about the Provençal troubadours; but as a revolutionary I would rather have Signor Marinetti, who is at any rate a genuine hustler, whereas Mr. Pound assuming violence and ruthlessness is as unimpressive in his movements as a man who is trying to use someone else’s coat as a pair of trousers.

Sign’d, “Solomon Eagle” (John Collings Squire) in the New Statesman. Somehow it all brings up (again) the decidedly minor (and passéist) stinks of the tiny league of unrequited flarfdom, who, I see, are planning another upcoming “go” of it in the metropolis. Bande des minables. If one’s not quite peculiar enough, one bands together with other lackers to “fashion” an little industry, just socially ept enough to boost itself up. What’s noticeable is the insistent manufactured bravado of such pre-supplied social context—all groupuscules suffer it. Not they, inheritors of Greil Marcus’s “old weird America,” or of what Robert Hass, talking about both Anne Bradstreet and Edward Taylor, calls “the solitariness, self-sufficiency, and peculiarity of the American imagination.” The private wild strains finally flourish.

Reading, too, one of Hugh Kenner’s littler Joyce books, Joyce’s Voices. Learning that Yeats claim’d to’ve seen George Bernard Shaw “in a vision as an incarnate sewing-machine, but a sewing machine that perpetually smiled.” Almost enough to make me want to allow the (mostly) dreadful Mr. Yeats another chance. (A history of sewing machines invading the imaginary: the Comte de Lautréamont’s “Beau comme la rencontre fortuite sur une table de dissection d’une machine à coudre et d’un parapluie.” “Beautiful as the chance encounter of a sewing machine and an umbrella on a dissection table.” One recalls that the Comte is talking about a boy, convulsively “beau.”)

Kenner’s assessment of Joyce’s (poor) natural sentence-constructing apparatus, and “not extensive” “repertory of syntactic devices”—he is master of the single word placed with phenomenal accuracy and effect. “His sentences, on the whole, suffice to get the words together, and when he is unsure of himself, in an early draft for instance of a bread-and-butter letter, entangled priorities will entangle his constructions as gracelessly as Gerty’s though less entertainingly.” MacDowell, of course. And provides an example out of Stephen Hero:

A metaphor is a vice that attracts the dull mind by reason of its aptness and repels the too serious mind by reason of its falsity and danger so that, after all, there is something to be said, nothing voluminous perhaps, but at least a word of concession for that class of society which in literature as in everything else goes always with its four feet on the ground.

Which I love mostly for its mocking percept of the literary bunch (“dull,” “serious”) so four-footedly leery of metaphorical “flight.” Like, I know of cats like that! Scrupulously “literal,” caught in the coffers of the mildest eye-propell’d “objectivism”—as if a lyric outburst’d carry off the final vestiges of whatever little percept they opticks glean’d . . . Literary gleaners, following the solitary thrashers sitting high up on they big shiny combines. 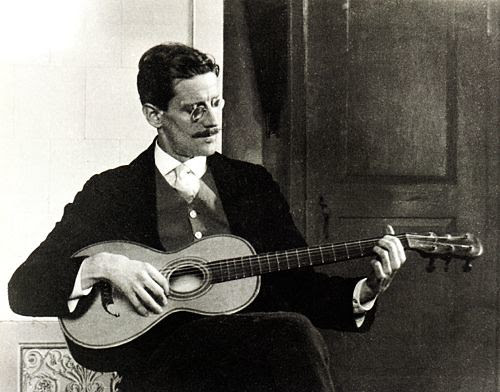 James Joyce in Trieste, 1915
(Photograph by Ottacaro Weiss, a friend who was “scandalized” by Joyce’s guitar playing.)