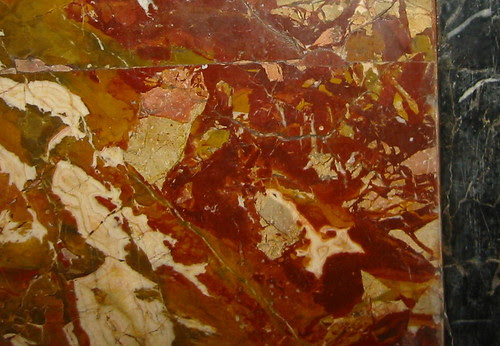 A Wall (Aggregate and Weasel)

Lazy. Or distract’d. Several little minor boils pucker’d up the weekend, none apt enough, or of a puncturably roseate readiness. Time skips off and one’s left—the defeatist in the parlour—gazing after the ghost of a sure plenitude, or sleepily scratching a surface gone slack. One high-water moment a poem by J. H. Prynne, out of the 1974 Wound Response:

As grazing the earth
the sun raises
its mouth to the night
rick, ox-eyed
and burning, strewn over
the phase path

At the turning-places
of the sun the
head glistens, dew falls
from the apse line:

O lye still, thou
Little Musgrave, the
grass is wet
and streak’d with light

Heartbreakingly quiet, as if one’ll never know a quiet like that again. “Phase path” and “apse line,” terms of celestial mechanics—the latter, in a lovely definition, call’d somewhere “the imaginary line defined by an orbit’s eccentricity vector”—indicative of the slow invasion of such terminology into Prynne’s later work. The piece spading around in the nigh-invisible furrows of history’s (literature’s) arable trace. I see now I am thinking of some combination of a John Constable painting, ox overwhelm’d by field and (mostly) sky, and of the story of how the tracks of the huge white billowy Conestoga wagons remain etch’d across the plains. I see, too, that the Musgrave is he of one of the Child ballads, “The Ballad of Little Musgrave and Lady Barnard,” he who is caught out boinking the Lady and is kill’d by the two-sword’d Lord returning:

Arise, arise, thou little Musgràve,
And put thy cloathes nowe on,
It shall never be said in my countree,
That I killed a naked man.

I have two swordes in one scabbàrde,
Full deare they cost my purse;
And thou shalt have the best of them,
And I will have the worse.

Prynne: “none of my poems are expressions of the personality of the writer or part of any biographical history: sometimes they contain several different voices, and sometimes no specific voice at all or any person who is assumed to be speaking.” Which banks parallel in an odd combinatory track (jumping off out of St. Louis with the settlers) to the claim of Mr. Thomas Stearns Eliot himself: “Poetry . . . is not the expression of personality, but the escape from personality.” Or, “extinction of personality.” Prynne’s lingo of the physical sciences (particularly in the “difficult” late work) oddly echoes Eliot’s scientism. Eliot: “It is in this depersonalization that art may be said to approach the condition of science . . . consider, as a suggestive analogy, the action which takes place when a bit of finely filiated platinum is introduced into a chamber containing oxygen and sulphur dioxide.” I long to read something like the sections of Prynne’s 1998 Red D Gypsum as “saying” another ante-upped version of that thing:

Did you light furtive aggregate late-flow samples
to peter out frozen turns almost dive back cloven
slate, nearly slow now. Lastly lit well did you,
not yet waiting over, visibly knowing ahead blank
parts zinc plates yours. Thermal in latch fluid
image blurs selector forks, aspect sweet would my
do its wash and round lower lower still to steps
grounded for all rejoinders to miss so new a weave.

Tactical ploys, invariably futile. Eliot’s attempt to outwit language’s slippery ways—refusing, the imperial “refined” sensibility of the ear coming to the fore, to admit how language, all desiring—a monstrous system of desire—’ll invariably “take” one, no matter what the avoidance schematic, the ploy, the ruse—gets overturn’d by someone like Prynne. One example: how a title like Red D Gypsum provides a miniature excursus and exemplar of lingual wantonness: is one to read it as packaging (marketing) lingo: “Red D” = “Ready”? Is there a Prynne-joke duplicitously dump’d therein? “Ready (to) gyp some . . .”? Or is the Eliotic edict to “force . . . language” still present in Prynne? In “Some Aspects of Poems and Translations” he says:

In poems which are perceived as difficult to understand clearly and fully, often . . . help from the study of context does not work so well. Individual words are placed in close relation in a new way, so that it is not easy to guess how the meaning of one relates to the meaning of the other. Sometimes a whole string of words seems to be making uncertain or doubtful connections, so that when the reader or translator consults a full, inclusive dictionary the different meanings for each word all seem at least partly possible, because the guidelines of sense and idiom seem to point in so many different directions at once.

Clearly Prynne’s talking about Prynne poems, and clearly there is, in Prynne’s version of how writing gets written, more than a dollop or smidgen of intent in the proceedings. No Romantic riding the high cloud of one’s gathering maelstrom, the poem spat out like so many droplets, a rainy incomprehensible wash flooding the writer. Is there something of that in “visibly knowing ahead blank / parts”? Is that in opposition to “fluid / image blurs selector forks, aspect sweet” with the wash itself oncoming? Where lies the sense of rejoinder (to the reader? or, “joinery” in its fist, suggesting the making of new things out of old?)—“to miss so new a weave.” Here’s where—easing into a not entirely aimless, though not too cautious, exchange with the poem calls up another of Prynne’s notes re: translation: “Take up a relaxed but alert position, and clear the mind of restless outside thoughts. Don’t attempt this work is you are at all sleepy, or have a demanding task immediately ahead of you. . . . This control of mood is important because you will need to respond to translation challenges by using your own imagination; it is not enough to work at a foreign text without any spirit of your own.” 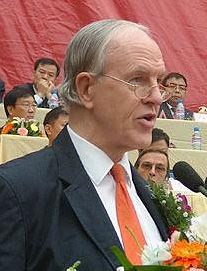