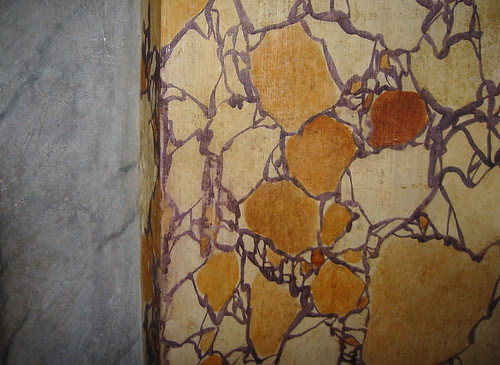 A Wall (“Distempering the Colours with Ox-gall”)

Words Mentall are Syllabicated thoughts:
Words Orall but thoughts Whiffld in the Winde:
Words Writ, are incky, Goose quill-slabbred draughts:
Although the fairest blossoms of the minde.
Then can such glasses cleare enough descry
My Love to thee, or thy rich Deity?

Words are befould, Thoughts filthy fumes that smoake,
From smutty Huts, like Will-a-Wisps that rise
From Quaugmires, run ore bogs where frogs do Croake,
Lead all astray led by them by the eyes.
My muddy words so dark thy Deity,
And cloude thy sun-shine, and its shining sky.

Yet spare mee, Lord, to use this hurden ware
I have no finer stuff to use . . .

Thus Edward Taylor in 1701 in Westfield, Massachusetts, out of the second series of Preparatory Meditations. One supposes it a conventional trope, consternation before the sully’d word’s inadequacy (and dirt) approaching the deity (that “naked Idea” again). Though: considering Taylor “had delivered several thousand sermons, written more than 2,000 manuscript pages of original prose, and composed some 40,000 lines of poetry—practically all of which remained only in manuscript form for more than two hundred years” (eventually sought out by Dickinson scholar Thomas H. Johnson in the mid-’thirties)—one stops a little in baffle’d wonder at such a relationship to one’s “tools.” Taylor’s love of language, its rhythms and rages, musicks and orthographies, is everywhere evident, randomly cough’d forth. See, after witnessing a bout of smallpox (“Blew streakt Poyson hellish, ranck, / Bubs hatcht in natures nest on Serpents Eggs”), lines like:

I cannot kill nor Coop them up: my Curb
’S less than a Snaffle in their mouth: my Rains
They as a twine thrid, snap: by hell they’re spurd:
And load my Soule with swagging loads of pains.
Black Imps, young Divells, snap, bite, drag to bring
And pick mee headlong hells dread Whirle Poole in.

Internal echoes and pivots (what’s the sonic relation between “thrid” and “spurd”?), a jagged antagonistickal music, slant-rhymes (“Curb” / “spurd”), and that marvelous syntactical pirouette that somehow makes the final line ape the increasing liquid velocity of water circling down into a drain.

What’s the appeal of flailing through half-uncover’d things, of “keeping oneself a little stupid”? I got to Taylor by thumbing around a ransacked F. O. Matthiessen-edited Oxford Book of American Verse I haul’d out of a yard sale off Slater Settlement Road near Ithaca, New York. It’s inscribed “To John / Christmas 1969 / from Kevin” by pure chance. “Had not my Soule’s, thy Conduit, Pipes stopt bin / With mud, what Ravishment would’st thou Convay?” Is that the line, “stopt” up itself, stutter-y, that convinced me a longer look’s required? (I’d been trying to think about Jonathan Edwards and Susan Howe.) Though, now, returning to Howe, strindging the pages for a stitch of Taylor, I see a possible connect in the form of a title:

One Christographia
ink not steadfast one
screech-owl feather

Clipped this word—
Strict to its number
The rest come after

Out of the title piece of Souls of the Labadie Tract, “about” the Labadists—contemporaries of Taylor—in what they call’d New Bohemia, in Maryland. “Preparing themselves for the coming millennium.” “Marriage was renounced. They held all property in common (including children) and supported themselves by manual labor and commerce.” “The 3,750 acre Labadie Tract, consisting of four necks of land.” Curiously enough, the library at the University of Michigan maintains a collection of anarchist / utopian / social change movements papers and pamphlets, &c. known as the Labadie Collection. Howe’s Labadie:

Jean de Labadie. His reach is through language hints; through notes and maps. In the lapse of time the pressure of others. So it’s telepathic though who knows why or in what way

And the sentence ends without its period. “Language hints”: look how Howe’s lines echo the echoes of Taylor: “Greenest green your holy cope / feigned cope and tinsel cap.”

Morning drubs me out of my reverie and, coffeeing up against the cold, I think: is it possible that those “incky, Goose quill-slabbred draughts,” that sense of words “befould,” is one traceable source for the curious and rampant notion that perfect style is nigh-invisible, that writing that calls attention to itself is decidedly not the “finer stuff”? Hectorings for plain speech, plain style, against prolixities and verbosities: one notes it in things like Strunk & White with its sleek imperatives: “Prefer the standard to the offbeat.” “Omit needless words.” (Taylor’s complaints of how ’s would-be “Damask Web of Velvet Verse” runs “To rags, and jags: so snicksnarld to the thrum.” Or how ’s “pimping soule, These wonders pins up in an Auger hole.”)

Another dim burst of phosphorous in the brainpan: if, as is suggest’d somewhere, Taylor’s sermons detail the “ratiocinative part of the meditative process,” do the poems of the Preparatory Meditations descry a resultant emotional stir and fallout? And is Howe’s hybridity, prose and poetry, kin to that? Look at a sliver like:

The inexpungeable trace ash of the fiery mind, distillate of reason. 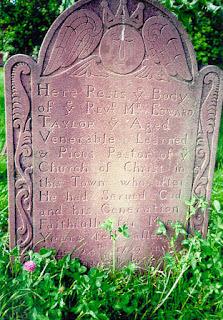