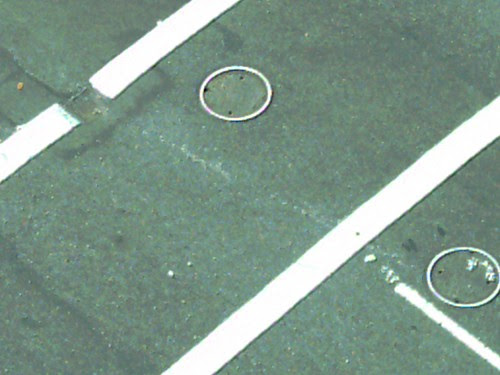 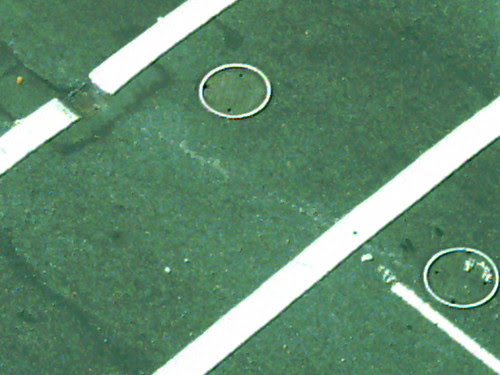 Somewhere— irrecoverable it is, oh my leaky brainbox—and recently, I read that Barrett Watten’s “folder” for The Grand Piano now contains upwards to five thousand “items.” I think of it whilst reading Tom Mandel’s entry in le numéro 4, wherein he reproduces a number of paragraphs he’d apparently written (presumably for the Piano listserv) “April 12, 2003—long before we decided on the shape of this project.” Paragraphs “about the disastrous event devoted to Zukofsky” that Mandel’d put together circa 1979 at the Poetry Center. Now, presumably, a number of other Pianists were present on the occasion—Watten, certainly, he’s on stage putting pages of “A” upside-down into an “opaque projector, being “slow to build momentum” and being hound’d by Robert Duncan who’s up next with, likely, some theosophical mumbo-jumbo about Zukofsky’s “Zinnia,” out of 80 Flowers. It’s likely that a majority of the eight other authors of the “Experiment in Collective Autobiography” were, too, present. Why not get all the scuttlebutt and scribbles about the occasion out—together—for examination? (Watten follows Mandel in number 4—a quick skim fails to uncover any “take” by him on the event, not here, not now.) It’s as if one’s being handed about a tenth of the pieces of a puzzle, the peaky iceberg part, arranged—I don’t know—by similar shape rather than color. There’s an untoward artifice to it—why not put whatever arguments against (or agreements with) Mandel’s version out there (as they surely must’ve occurred—in contradictory overlap and tangle on that listserv in April four years back)? There’s a sense of control, of pacing, of withholding, in the Grand Piano presentation. Rather than the “raw,” the exceedingly “cooked.” Rather than the “déluge,” the “moi.” As such, it hardly benefits by its collectivity at all.

Mandel—then-director of the Center—makes of the “infamous evening of discussion devoted to” Zukofsky a turning point: “So began the ‘language wars.’ Poetry as agon not conversation.” He charges Duncan: “he helped roust me out of the Poetry Center some months later.” And:

They say Robert had driven Robin Blaser out of town a decade earlier, and Denise Levertov too. His feud with Jack Spicer is well documented. I wonder what one wins in these poetry wars? Daily life with acolytes? If that’s utopia, give me la dérive.

Et c’est bien fini, tout court. No need for consensus or talk: Duncan start’d it. (Or, Clark start’d it. Or, Dorn start’d it. Or . . .) It’s a curious moment in the “autobiography,” there’s a terrible irony to the sweet bravado in the call for a daily life more various than that “with acolytes.” The irony of brushing criticism aside, of repeat’d and continuing failure to engage. “Life with acolytes” is exactly what academic life is for the writer, a sort of spit and image factory.

whir in all waz anc

Which one’d interpret as “Where in hell was I?” if only Mandel-the-narrator didn’t seem so sure-fired certain of where he was at all times, and how perfectly it suit’d him.

Out under the spit-up
Dive-shine of night, its
Starry orchestral thump & heave,
I stump, with a beef

Against all the crowd-caterers,
The ferrymen of the effluvial
Junks that ply the run-
Off ditches, guy’d by fun.

Laughter pulls a toothy weight,
Ropes a cumber’d sun down,
Hauls it like a Gulliver,
A problem for Mrs. Miniver,

Like finding an enemy combatant
In one’s garden, or making
A Venn diagram of two
Circles overlap’d, things to eschew. 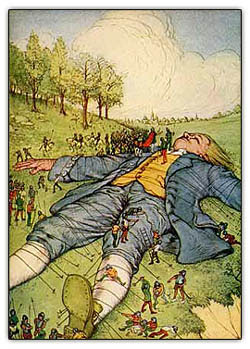 Milo Winter, Gulliver (“I found my arms and legs were strongly fastened on each side to the ground”), c. 1912