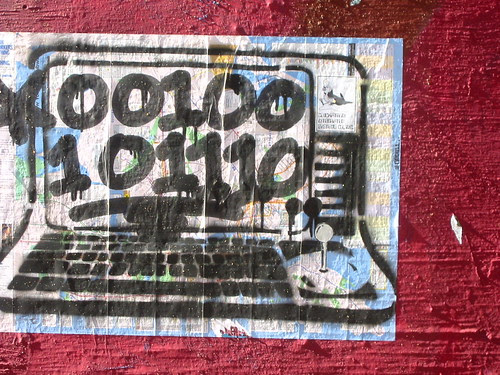 Energy lag, toe & harness—
A shill mop of brow
With awkward wooden fingers just
When the tractor lurches into

A slide-out, squeegees off
The run-off fed clayey
Substrate and socks itself into
A rut. What to do.

Plug the coordinate air with
A bung-job of stumpy
Vowel’d grunts and try getting
Out of it. No luck.

Cease resisting, ease off &
Back up, idle in reverse
And eye the choppy kestrel’s
Way of hanging, oscillate hoverer.

That hang and appendage, that’s me. Scoop’d up the Ashbery-imprimatur’d (select’d by J.A. in the 2006 National Poetry Series competition) Noah Eli Gordon book, Novel Pictorial Noise (Harper Perennial, 2007) something I rather “want’d” to like, having enjoy’d The Frequencies (Tougher Disguises, 2003)—and. Is it fault of my own self’s being too poised for a pounce, unhappy with what I see as an increasingly slack prevalent (period) style, antithesis of oomph and agency, and that precisely corresponding to a moment in the imperium when empty forms ought perish? Yes, partly.

The book begins with two epigraphs, one by Elizabeth Willis out of the Erasmus Darwin-inspired prose poems of Meteoric Flowers (“The world is clanking: noun, noun, noun.”), one tiny clip out of something by Barbara Guest (“so silence is pictorial / when silence is real”). What follows is a kind of Willis / Guest conversation: prose poem alternating with little notational clumps, mostly no longer than a couple of lines. No titles to anything. Here’s one of the prose pieces:

The essence of pictorial fact aspires to describe itself as a panorama, an impossible cultivation of pictorial elements. I hold that thinking is an image of art. Therefore, in proposing the helicopter as the only subject retaining any seriousness, one is concurrently giving rise to the fundamental ineptness of abstraction. For example, suppose I see an aesthetic accident rather than the intension expounded in the translator’s preface. Might we then say that the architecture of the gallery space is an analogy for the plasticity of the figurative? The neutrality of such a proof is no more erroneous than the landing pad one might position on one’s roof.

On the facing (prior) page: “of their Pictures a present view.” On the verso:

lost acting for measure for expression for
avoidance

I suppose one could argue that the helicopter is “the only subject retaining any seriousness” (made emphatic by the “proof” on the “roof”—that landing pad). I suppose one could admire that, a kind of tiny flag stuck into a cloud-cover’d map, bringing about a sense of form. (Each of the prose poems manages a ragged arrhythmic rhyme at the end—“the real task at hand, turning smallness into something grand” is how the next one concludes. Often the strongest—precise, tangible—language occurs there.) My sinking feeling about the piece, I think, is due to the encumbrances of something like Latinate slurry, a kind of quicksand of intangibles, abstractions, a vaguely art-textbooky wash when I just want to get (at least) to the reproduction of the painting itself. To say nothing about the world. To put it in “anodyne for the new consciousness” speech: To say nothing about what we continue to say nothing about.

Again (a second reading). Stuck in the brainbox: some conjunction between Dr. Johnson’s observation that an age of ignorance is an age of ceremony, and Gordon’s remark—“That it is no longer necessary to know much of anything is the noisy irony of the information age.” Poetry relegated to a merely ceremonial art, wholly without agency, outside the polis. Perhaps it’s always dwelt there.

Noting (rereading) how the short fragmentary (verso’d) essentially go invisible—I neglect to read them, the book becoming not unlike a facing pages bilingual edition, a half-book to a monoglot. Neither adding nor distracting, those snippets. Noting something between a revel in and shrugging acceptance of vaguery, that why-bother heave-acceptance of language’s ineffectuality that afflicts the age: “Unimportant that my arrows point anywhere,” “any expression is merely detour,” “limitation that throws one satisfyingly out of joint,” mere ceremonies of saying. (Though “sickness” in a sentence such as “The first symptom of motion picture sickness: being content to stare at whatever’s there” may hint at recognition of the problems implicit in such defeatist laissez-faire-ism.) Noting slivers of Ashbery un peu partout with proactive disclaimer, “Make of my work an acrimonious analogy to an instruction manual if you must . . .” (Though, one’d argue, too, that any work without a smutch of J.A. to it’d likely seem somewhat out of kilter with its century, its countray. Impossible not, as Gordon says in another nod, “to run a trademarked frame of reference up the flagpole,” the Ashbery trademark’s everywhere one turns.)

Noting that I likely come at Novel Pictorial Noise with such severity perhaps less for itself than as stand-in for all our failures. Gordon: “The way I see it, we’re all partially tainted.” After all, there’re terrific things here, and done up with wry humor (“Orbiting parataxis metropolis, just about the most fun a neo-flaneur can hope for.” “Several ants beelining back to headquarters.”) It (the book) becomes the brunt-end of a conflict play’d out increasingly here: what’s one do with what one knows? Oscillate, hovering . . .