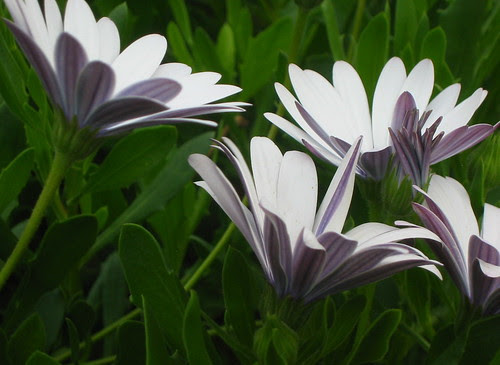 Achieved an ample clarity just
By lining out anything theoretical,
Keeping to the neighborhood of
Green when green undid its

Jacket, or stretch’d out its
Arm to display a bodacious
Wristwatch, anachronistic as all hell.
Achieved a green unruly as

Melancholy, its low mass &
Nuzzling up intractable against the
City-grid’s staunch rubble, I-
Beams awry and barely identifiable.

Achieved a vacant delivery of
Green kneeling at the heel
Of an interim spit, caught
Between two bodies of blue.

Symptoms of my unsettledness, my uneasy. Read around in circles mal-apportioned yesterday, various. Thinking again about made-up epigraphs (see my earlier fuss). In the fourth fascicle of The Grand Piano, Carla Harryman, talking about her chapbook Percentage, quotes lines by “Stendahl” (“a pseudonym for language and play”):

A cornstalk thins under skeleton hands. The lady liar pauper fidgets by a brick wall and howls at the young man who stares at a huge fake flower bulging out of a man holding his pet’s tongue against the cityscape in order to hoax an unsuspecting woman protecting her spoons.

Harryman: “They were fabricated by my own hand, including the ascription.” Notable: the number of “keys” to the fakery: “liar,” “fake,” “hoax,” “unsuspecting.” Idly pondering the original of such attributables, bicycling in under crow-heavy trees, scooting through splat’d ammoniac under-reaches. It’s a manoeuvre akin to begging the approbation of the muses, affixing a credential, borrowing against a legacy. Unlike the whole-hog hoaxes—Chatterton’s faux-mediaevaleries, Macpherson’s Scottish-Gaelic Ossian discoveries—here the intent is something lodged between gaining lineage / permission and mockery. Measured by how suspect one’s quotable seems. (Harryman’s seem’d immediately suspect—at least when encounter’d in the environs of The Grand Piano—I never read the original chap.) 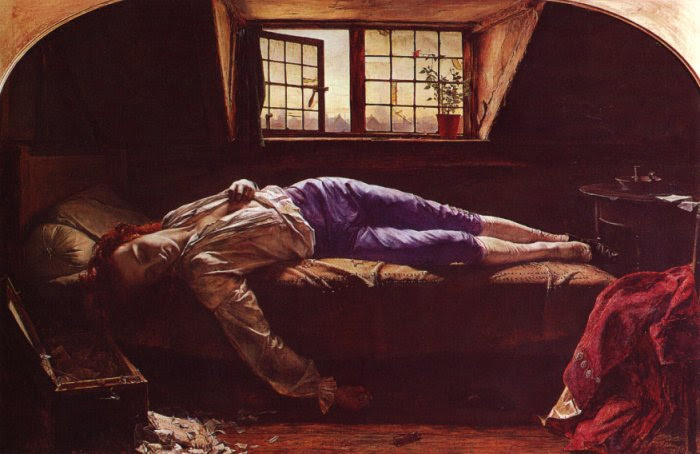 Henry Wallis, “The Death of Chatterton,” 1856
(Paint’d in Gray’s Inn, with George Meredith for model.)