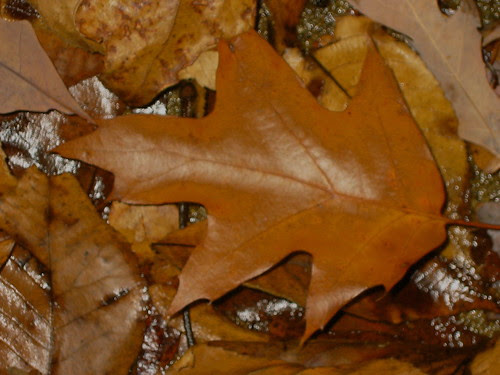 Out with the dog, dusk.
Rake of headlights against hedges,
End of day noises, a
Hammer’s final ritardando big, &

Clang of being flung into
Toolbox. ‘Traceries sufficient to other’s
Need’ is how Olson put
It, a kind of domestic

Engineering, a pebble, finger-rubbed.
Beyond the tidy neighborhood: a
Sergeant, thirty-one, brought up
Out of Iraq in a

A deadpan day. Required composure:
Solitary habitual rictus, tooth’d against
The sheer folly of admitting
How death one day will

Post an inky letter, one
In a tub, pre-sort’d,
Of bulk mail, spat out
Beyond the tumble and clack

Of addressograph plates, as impersonal
As light. As if summoning
One to a banquet, or
A bank, for proceedings gastronomical

Or fiduciary, Respondez in advance.
What is it keeps one
Regimentally calm, day going poker-
Facedly down into night’s compost?

Forgot how long it is possible for a man to look into the mirey depths of a word, seeing something not-word in its vulviform layering turn and spoke, seeing letter become smudge and smudge become village romp, thready desire, aperies of time’s palimpsest on space—it’s all rather heavenly and speck-of-the-universe-making à la fois, Frank O’Hara had it perfectly exact, “all thoughts disappear in a strange quiet excitement / I am sure of nothing but this, intensified by breathing.” Is it “good” to make writing a staring contest (other, pre-“quota” days, I’d walk away, go sprawl across the lumpy mattress with a book, cluck up the dog, pout)? O’Hara, too, says “it is good to be several floors up in the dead of night / wondering whether you are any good or not / and the only decision you can make is that you did it.” Which is presumably how it “ought” to be, unless one is tempt’d to de-beeve the “contemporary masters” and try to become, rather sillyly, a nonce word unto oneself, or, ugh, a wholly impermanent legend.

Reading the Ralph Maud-edited Selected Letters of Charles Olson. A chronological spray, emphasis “variety.” With Maud’s inter-epistolary jottings, it outlines a brief biography. Maud: “If one reads in sequence one will slowly become accustomed to the poet’s so-called difficult style as it develops. A trust will be generated to carry one forward, a trust that Olson may be idiosyncratic, but not uncreatively perverse.” Maud notes, too, re: Olson’s style: “advances into a new syntax of experience”—skipping the obvious, Olson’s belabour’d indebtedness to Pound’s own rather sophomoric misspellings and phrasings. Which is most (and earliest) evident in the Creeley exchanges. (A period in the late ’sixties or so when one’d identify one’s advanced “poetic” merely by the presence of “yrs” “&” “tho” “/” “cd” “shd” &c. in the verse-carcass.)

Olson’s range—one senses a man omnivorous, of a wild and true curiosity, and hardly misanthropic, he walks (the docks, the railroad yards—somewhere he reports: “Ears wide open. . . . listening to wharves & men”) to meet people, to talk, not for brooding, or thinking, or solitary brain-box-plunders. Making the “saturation job” remark something in the way of a note to oneself. Olson’s terrific push into history. A 1946 letter to Ruth Benedict (of Patterns of Culture): “I continuously find myself reaching back and down in order to make sense out of now and to lead ahead”—that rare maturity, one not wholly immersed by ’s own paltry epoch (all epochs being paltry). Writing to Benedict about Call Me Ishmael, its “method of narrative,” Olson writes how it opens with “a FIRST FACT, a telling of what happened to the 21 men of the crew of the “Essex” sunk by a sperm whale in the Pacific in 1819.” And later, the refusal of the critical stance: “No interpretation within the story, no position. In New History the act of the observer, if his personality is of count, is before, in the selection of the material. This is where we will cut the knot. There has been, is too much of everything, including knowledge, because it has not been winnowed . . . I think if you burn the facts long and hard enough in yourself as crucible you’ll come to the few facts that matter. And then fact can be fable again.”

Elsewhere (to the Guggenheim Foundation): “The record of fact is, in my method, the root. . . . that method ends in narrative and image.” (Recalling the period, early ’eighties, when one’s “theory” got uppity about “metaphor” and try’d to replace such textures with “the factual,” and commenced all higgledy-piggledy to “collect facts” (which mostly “went” into poems “in the form of letters”). Which “project” went swell except for the “fact” that one spent most upright hours in an inebriated stupor, a poor condition for “fact-collecting.”)

Olson, who always struck me as one of “those who rush ahead” par excellence, see the sheer volume of letters, reporting how X “made a remark after his first months here which gave me a clue: ‘In America you have to spend so much of your time reacting you don’t have the time or energy to act.’ I think any of us halters know that, but it was a palliative to my slow soul to hear it. I distrust those who rush ahead. They come to me always thin.”

Funny sight of a man
Gone apoplectic with the obvious
(To him), that primitive impotence
Of stomp & gloat. Wrong,

We be so smally-contain’d
Between Brackish Netherford & Pus,
Out in the unhinder’d devilish
Reaches, reaching for our ass

That’s being most fork’d by
The tiny tyrant of our-
Self, that proud clot unemunct’d.
Hence: global bloody massacres continue,

In Pennsylvania a twenty-point
Buck’s bagged, three antler’d, an
Adversary’s bust’d off in rut,
Stuck into its runny eye.