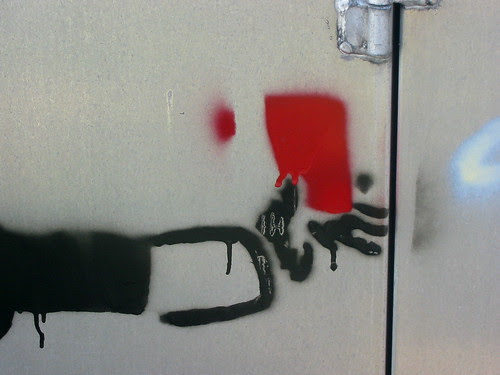 Sun-shafts drill the ailanthus,
Weed tree of the spoil’d
Polis, gangly in municipal lots.
I like its pushy indifference—

Bomb thing to say about
A tree—and the sky’s
‘Pert & comely innuendo blue.’
There. Writing in open contempt

Of the physical world. Curtly
Pummeling the unpresentable beyond, its
Trashy nineteenth-century duds &
Encumbrances. Nothing here beyond disfigurement,

Jack, and writing. Pinnate leaf,
Greenish buds, a stench of
Exhaust and that chassis, stripped
And torch’d. Bunch a words.

Thinking about what I saw in the negligible slice of the “Kenny” Goldsmith “clip” I plugged into at Ubu, the kind of thing I rarely do. The thing cut out without ending, thankfully enough. What I recall is the complete assurance of Goldsmith—and of talking head Bruce Andrews. Nothing exploratory here, total blithe unencumber’d certainty à la Dick Cheney against the supposedly disastrous quaint imbecility of anybody who’d attempt to, say, capture with some degree of accuracy anything human. If Goldsmith’s deadpan smarm regarding a self-appoint’d role as agent provocateur for a lack of creativity aims to rile—perhaps forgivable in some honorary history of avant-garde “moves,” Andrews’s self-satisfy’d chorus peeps just seem that: he lays down a barrage of meaningless code-words—“epiphany,” “therapeutic,” “crappy ideologies,” “verisimilitude,” “lyric”—without either detailing the complaint, or providing example. “Hacks.” To see some of the Language boys retailing tired arguments of thirty years back—arguments that even in 1977 had only a tenuous connect to life then “on the ground” (as we didn’t say), is perturbing. Call it Alexander Haigismus, that predilection to repeat lies again and again to the point that one comes to think them truths. Worse, others do. Or others believe that Andrews’s little firecracker strings of vulgar pop-off sexist claptrap’d serve as a model for a resistance writing, something that’ll engage a pixelated and Paxil’d-up populace indifferent to the imperium’s daily slaughter. Or there’s Goldsmith’s recycled “text,” “material”: at last count the U. S. government’d recycled 3,859 U. S. soldiers in Iraq. “What, me worry?” says a-g mascot Goldsmith (“maddeningly”). There’s probably enough text around to commemorate the 3,859 soldiers: no need to expend another ounce of energy for ongoing, criminal war dead, not in the light of the trappings of what? Goldsmith’s tired old iconoclasm, affectless, smug, incurious, formal? It’s decidedly not “hot,” and not “’sixties.”

(Stein’s “A sentence is not emotional a paragraph is” drubs around in the background of my thinking. Isn’t a certain emotional content necessary to move a populace, to engage a citizenry? Isn’t the failure of the New Sentence precisely in its refusal to “paragraph,” to build affect sentence by conjoin’d sentence? How “nineteenth century!” How “hokey!”)

Nineteenth-century man Melville: “There is the grand truth about Nathaniel Hawthorne. He says No! in thunder; but the Devil himself cannot make him say yes. For all men who say yes lie; and all men who say no,—why they are in the happy condition of judicious, unencumbered travelers in Europe; they cross the frontiers into Eternity with nothing but a carpet-bag,—that is to say, the Ego. Whereas those yes-gentry, they travel with heaps of baggage, and damn them, they will never get through the Custom House.”