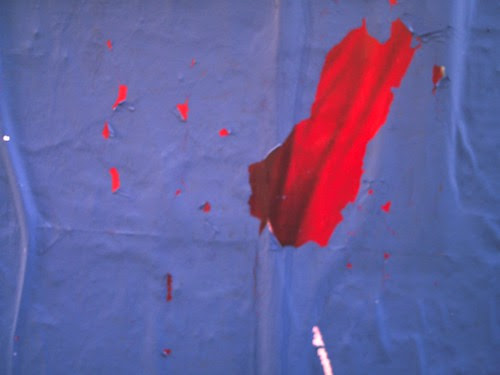 The bane of the word-
Filthy opulist: there is none.
Ode out of nothing is
The caul and mortar, brute

Affiance, of what one makes.
It is deliver’d up out
Of interstitial madnesses, matrimonial escroqueries
Stretch’d out limbic thin. A

Boundary, it cleaves to itself
Noisily indifferent to whatever sound-
Jostling’s necessary to remain stuck
To a place not so

A piecemeal story. ‘Fugue-tongue
In crotch-din. Thigh-light.’
Some days all language is
Just a muster of palliatives

Against the violence of truth,
The way a man in
A laundromat topples a mountainous
Load into the dryer and

Spells it out for everybody:
‘’Retha—wont—nebbe—’xackly—slim.’
A perfect story. Big aperçu
In run-off. The water-

Cuts ducks make in pond-
Scum etch out a faint
Diminuendo and swerve, hieroglyphic. A
Scrupulous vocabulary of leaving out.

Breezed through Janet Malcolm’s peculiar little book Two Lives about Gertrude Stein and Alice B. Toklas in WWII, and somehow, too, about the vicissitudes of biography. Malcolm’s unable to decide if she likes or dislikes Stein and Toklas; she engages in something similar to what she accuses Stein herself of doing in her (Stein’s) early years in Paris (“a period of the most relentless despair, surrender of ambition and psychological disorientation,” she says, quoting legendary Stein scholar Leon Katz’s unpublish’d dissertation—the book’s also about him—before Stein (in her word’s) “was knowing that I was a genius.”). Malcolm (after claiming that Stein “lived in a kind of ghetto of American relatives and friends, whose French acquaintance was limited almost exclusively to servants, tradesmen, and concierges”—the use of “ghetto” here a marker of Stein’s (and possibly Malcolm’s?) ambivalence about being Jewish) writes that “much of Stein’s time was spent with relatives and girlfriend’s sitting around the house analyzing each other according to strange systems of disapproval.” (Good practice, one’d wager, for entry into any literary “scene.”)

Malcolm on the (belch) “flaccid narrativity” of biography:

The minor characters of biography, like their counterparts in fiction are less tenderly treated than major characters. The writer uses them to advance his narrative and carelessly drops them when they have performed their function. . . . the biographer is writing a life not lives, and to keep himself on course, must cultivate a kind of narcissism on behalf of his subject that blinds him to the full humanity of anyone else. As he turns the bracing storylessness of human life into the flaccid narrativity of biography, he cannot worry about the people who never asked to be dragged into his shaky enterprise.

No prisoners. Why my sudden need to make an equation?orCross-multiplying, one’d derive storylessness as equal to a bracing narrative flaccidly divided. Stop it.

Stein’s crime of never seeming unhappy: “If you write about yourself or anybody it sound as if you were very unhappy and very bitter but generally speaking everybody living has a fairly cheerful time in living. . . . Any life you look at seems unhappy but any life lived is fairly cheerful, and whatever happens it goes on being so.” That Pollyannaish trace—some call it optimism—in American letters, result of “American letters” historically writ by wealth, les rentiers.

Maurice Denis in 1890: “Remember, a picture, before being a battle horse or a nude, or some anecdote, is essentially a flat surface covered with colors assembled in a certain order.” Poised (rather stretchingly) against Stein’s remark that “it is this scribbled and dirty and lined paper that is really to be to me always my receiver,” as if the materiality of the paper itself match’d a Steinian predisposition to materiality (“modernist”) that included words. (In fact, she is doubting—in The Making of Americans—whether she’ll ever gain a readership: “will there be for me ever any such a creature.”)

Stein’s “small and monotonous” (Malcolm) vocabulary. (“When she uses a new word it is like the entrance of a new character.”) Stein:

Every word I am ever using in writing has for me very existing being. Using a word I have not yet been using in my writing is to me very difficult and a peculiar feeling. . . . there are only a few words and with these mostly always I am writing that have for me completely entirely existing being, in talking I use many more of them of words I am not living but talking is another thing, in talking one can be saying mostly anything, often then I am using many words I never could be using in writing.

To the subsequent argument that Stein is “transcribing rather than transforming thought as she writes”: hogwash. Malcolm: “The alacrity with which she catches her thoughts before they turn into stale standard expressions may be the most singular of her accomplishments.” As if thinking occur’d naked, or half-clothedly, without the self-contain’d boosterism of language, or as if thinking’s initial (primal) costume’d be something other than “standard.”

For Mark Scroggins, who recently admitted to loving “twaddle” (the word): Henry James’s phrase “the twaddle of graciousness.” (Alice B. Toklas’s letters and thank-you notes, &c. exhibited just that.)

Wit’s appropriatrix of aughts: ‘We
Went down to Milan by
Train in intense heat . . . The
Next morning we continued toward

Florence. Because of the heat
I took off my cerise
Ribbon girdle in the dressing
Room of the train, ditching

It out the window. When
I returned Harriet said, What
An odd coincidence, I just
Saw your cherry-colored corset

Go by the window.’ That
And the story of A.
E. Housman’s demanding to know
Everything about a famous ichthyologist. 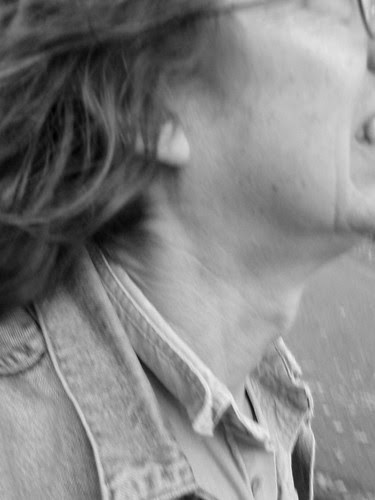 “When I Wasn’t Abject”