Through Words of Others 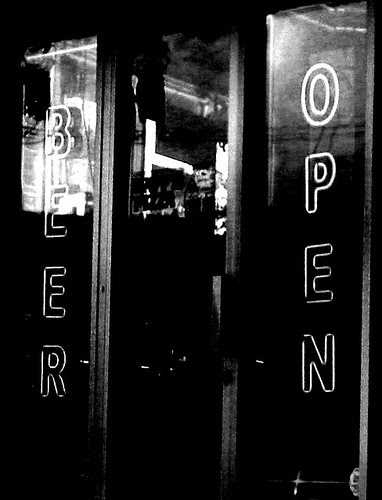 Skull-scattery into the weekend, tender end to the Ur-extended week. With a kind of monstrous participle dangling unforsworn (unforswunk), precocious ambient modifier, bricking up the innards. (Primitivist masonry.) Invariably, that batty coot Laura (Riding) Jackson (I nearly wrote Laura Ingalls Wilder) is a solace at such moments, unregalia’d and nutty-grim.

In Anarchism Is Not Enough she says, “Poetry I consider to be an art only when the poet consciously attempts to capture social prestige: when it is an art of public flattery.” (“Hey, I know that dude.”) And, next page: “Poetry is therefore not concentrated on an audience but on itself and only produces satisfaction in the sense that wherever this energy exists in a sufficient degree of strength and intactness it will be encouraged by poetry in further concentration of itself.” Wha? Poetry breeds poetry? One supposes the premise solid enough if one’s willing to accept poetry’s way of coursing unbid (unbinding) into the vessel of the poet (Martians, radio, Wm. Blake “hid” in the cupboard, &c.) Clarifying itself (like butter), disowning the pan or pot that allows it to fester uncongealingly a moment “above” the flame. (Or see Percy Bysshe Shelley’s notion of a “world poem”—“that great poem, which all poets like the co-operating thoughts of one great mind have built up since the beginning of the world.”) (Or see Susan Howe’s note in The Birth-Mark: Unsettling the Wilderness in American Literary History: “Poetry is never a personal possession. The poem was a vision and gesture before it became sign and coded exchange in a political economy of value.”)

I went to (Riding) Jackson (“because I wished to live deliberately”—the promise of diliberation to Thoreau akin to the promise of language’s “rational meaning” to (Riding) Jackson)—nudged there by Stephen Collis’s terrific Through Words of Others: Susan Howe and Anarcho-Scholasticism (ELS Editions, 2006). He lists it amongst Zukofsky’s Bottom, Olson’s Call Me Ishmael, Howe’s own My Emily Dickinson, Williams’s In the American Grain, H.D.’s Tribute to Freud, Pound’s Spirit of Romance, and Duncan’s H.D. Book—all “poets’ attempts to write their response to other poets,” all “Janus-faced works—part exegesis, part original expression,” all “singularities”—works writ in a mode of what he calls “anarcho-scholasticism,” dabblers and enthusiasts working the archival holes, bridging the rifts. (Collis’s book joins that select bunch.)

Such writing a kind of writing into the archive, the “world poem,” writing against the archive’s regulated keepers. As Howe says of Dickinson’s “decision not to publish her poems in her lifetime,” such unlicensed “tampering” with the “rules”—for the roots of archive go toward both “origin” or “beginning” and “law” or “authority”—of the archive becomes “a consummate Calvinist gesture of [paradoxical] self-assertion by a poet with faith to fling election loose across the incandescent shadows of futurity.” (O’Hara’s sense of publishing and “reception” is rather akin to Dickinson’s—“you just let all the different bodes fall where they may, and they always do may after a few months.”) Collis quotes Derrida’s Archive Fever: “The question of the archive is not . . . a question of the past . . . it is a question of the future, the question of the future itself, the question of a response, of a promise and of a responsibility for tomorrow.” (Any asserting of direct lineage is grosso modo an archival gesture, though clumsy as name-dropping in comparison to the textual meander and caress represent’d by books like Collis’s and Howe’s, &c. Just as any closing off, any opting out, any furtive scripting, any leaving out, &c. is contra the unfussy and unbridgeable American wilderness, its hopalong writerly gait, its open clumsiness. Collis, on the nefarious “reach” of notions of “enclosure and privatization” of the commons: “To shut up speech. To shut up documents in archive’s exclusion. To shut up land so that it many be ‘improved’ and become profitable. To shut up definition in dictionary versions.”) (“Hey, I know them, too.”)

Suppose you really do, toward the end, fall away into a sunset which is your own self-ignited pyre? is it any the less a sunset just because you stopped carrying the torch? I must pull myself together tomorrow early, is market dallying and this time I’ve got something to get rid of, inherited I’d never want. “Like has a way of making everything die.” Should I now that the war is over voluntarily about face and shoot things squarely and in the middle to test the steadiness of my rust-covered hand which has been so dependable of late? I do not love hunting or any of the Roman positions, yet foreigners frighten the very shores! Am I too lady luck or nuts?
. . . The leaves do not wither because it is winter, but because they stay there and know better, and they want what must happen, they are the lying down kind. If, when my cerise muslin sweeps across the agora, I hear no whispers even if they’re really echoes, I know they think I’m on my last legs, “She’s just bought a new racing car” they say, or “She’s using mercurochrome on her nipples.” They’d like to think so. I have a stevedore friend who tells everything that goes on in the harbor.
Well all right. But if this doesn’t cost me the supreme purse, my very talent, I’m not the starlet I thought I was. I’ve been advertising in the Post Office lately. Somebody’s got to ruin the queen, my ship’s just got to come in.

Well all right. “I open allegory / to all my impossibles.” My putting the two pieces into dialogue a little batty. Sense of an echo-y rambunct of concerns. One, my old bête noire metaphor, that American compulsion to insist on shooting straight from the hip: “Like has a way of making everything die.” (Which I don’t believe.) Next to Collis’s “abandon of metaphors.” (Later in “Abstraction Suite” one reads: “What is a pronunciamiento? / the unpronounceable / movement of arms.”) Unhesitant kinship between “a poem / veering off its track / towards fleeting feeling” and “Somebody’s got to ruin the queen, my ship’s just got to come in”? I insist.