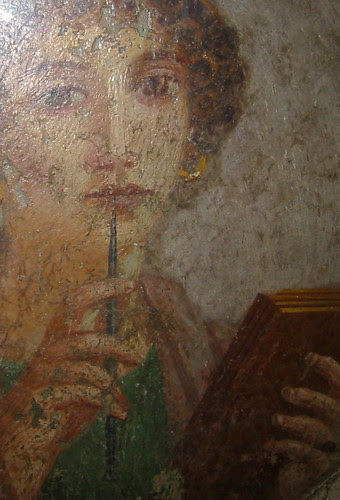 October and the sun like a sledge. Bicycle tinkering, the tire kaput, barely web’d enough to withhold the tube’s attempt’d herniations. Patching and readjusting. Grime city breakdown. Long late night swathes of reading Jennifer Moxley’s The Middle Room, arrest’d by sentence after sentence, by supple Homeric metaphors unreel’d with dexterity and finesse. Return to the baroquerie Hemingway cut to shreds. A Proustian ardor, maybe. A deft acuity in humoring the affect’d tribe’s peccadilloes, one delectable example being the remark how, during a class visit (to a Stephen Rodefer-run “seminar in poetic translation”) made by Paul Auster, “he and Rodefer were so devastatingly ‘in the know’ that I feared they might tax even the apparent boundlessness of their combined suavity.” I only grow a little alarm’d at the repeat’d sketches of costume, and (often) of furnishings—being entirely indifferent to garment and surround, and suspicious of attempts to “acculturate” such. (I am willing to argue—not unseriously—that only one single model of anything “essential” ought be made available—one style of pants, one shirt, one kind of shoes, one vehicle, one couch, one house, &c. With the majority of the now-available “kabillion” choices thus regulated, one’d be more likely to pursue one’s singularity elsewhere, in made things, in selfish wanton inventive industry. Or so my reasoning goes, utopian of one. Or maybe it’s some of my vestigial Scottish spareness, stinginess. Faites simple, as Escoffier had it.) It is, though, somewhat intriguing to learn of, say, Steve Evans’s ponytail’d “blue-black” hair, or to read of somebody’s hair upcomb’s resembling the crest of a Steller’s jay.

Against Moxley’s stories, I think of Jonathan Williams, writing in The Independent about Ronald Johnson: “In the summer of 1961, RJ and I hiked the Appalachian Trail from Springer Mountain, Georgia, to the Hudson River in New York, some 1447 miles. Perfect training for poets: learning to attend to the names of birds and plants and stars and trees and stones.” And the next year walking “five weeks in the Lake District”: “On the Sunday of the weekend of the Cuban Missile Crisis the poets spent the day trying to locate the grave of Beatrix Potter in Near Sawrey and Kurt Schwitters in Ambleside—and found neither.” That nigh-solitary companionable amble within a world outside of human commerce, outside its meretricious human vapors is what comes fetching me. I think of Moxley’s reports of her crew’s readings—the ante of the “performative” constantly upped—and I wonder. Suspicious of performance, how it’s liable to become mere showy zaniness, covering a paucity of, oh, “heft.” Why do I recall downing a cous-cous merguez with a German friend, another student at the Alliance Française, at some cheap upstairs eatery in the Latin Quarter circa 1974—how he rather impishly announced to the waiter at the end of the repast that he’d found it “bien fait, bien servi” (neither being the case)—the whole a kind of mockery of politesse and the way it gets incorporated into formulaic language’d tidbits. The same boy’d once caused a complete loss of scholarly demeanor in me, announcing, in a practice round using the formula avoir peur de (to be afraid of): “J’ai peur du soleil” (“I am afraid of the sun”).