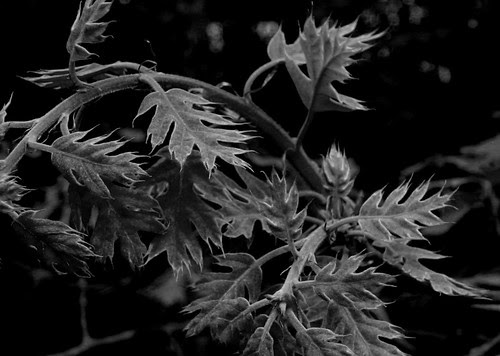 Yesterday a sudden rupture (fiery-thread’d angel-combatants peering down out of the severed blue vault) in the midst of “argument”—thinking, when did I forego the nonchalance of mere chrestomathy, piling up indelibles, for use? When did I begin to pile my blood oranges so showily up for display in lieu of dumping them up against the thorny artichokes in the self-sovereign gummy reticule? One of the hazards of “presentable” language (out front like a pair of button-fly pants, some’d say “ostentatious, egregious, fatuous showboating” and wouldn’t be too “off”) is that one’s so tempt’d to try to make it say something, too. And one goes all earnest in the spit and sizzle of the lime-fuel’d phares whose smoke is intermingling with that of the yellow Gitanes of the jazz crowd, and Django Reinhardt’s missing finger itches the way any ghost limb will—he’s waiting to go up next . . .

I read another hunk of Andre Fulani’s excellent Guy Davenport. And a cold rain interrupt’d me de temps en temps with its whutter-y onslaughts, hard enough to knock down a sizeable number of leaves lately turned. Everywhere now I see evidence of relations, correlations, writers of various tilts claiming it so. Paul Celan is quoted: “La poésie ne s’impose plus, elle s’expose.” And Robert Duncan, in “Towards an Open Universe,” calls for a poetics jimmy’d up by “the conviction that the order man may contrive or impose upon the things about him or upon his own language is trivial beside the divine order or natural order he may discover in them.” The task of the poet: looking, attending, uncovering the connecteds. (Do I think that? Or do I think it’s the making of previously unnoted connecteds that is the “job”? Is there a difference?)

Quoting Zukofsky (out of “A Statement for Poetry”): “A scientist may envy its [meaning poetry’s] bottomless perception of relations which, for all its intricacies, keeps a world of things tangible and whole.” Again and again—what Furlani insists is that Davenport’s faith—in the natural world, in language—is unbroken. He usefully reminds one of Charles Altieri’s early labeling (in Enlarging the Temple) of the progeny of Pound (the ones Davenport himself—in a note about Robert Kelly—calls the “Tribe of Ezra, sons of Olson, shaggy nephews of Doc Williams—they have been like the Mongol hordes camping in the ruins—” of modernism, one’d add) as possessing an “immanentist vision of the role of poetry. Here poetic creation is conceived more as the discovery and the disclosure of numinous relationships within nature than as the creation of containing and structuring forms.” More to the point [the point?], Altieri notes that for such first-row postmodernists “instability is not sufficient reason for renouncing idealization entirely in favor of the satiric mode that comes far too easily within twentieth-century life.” What he’s merely observing, I’d make something akin to a battle cry. Nigh thirty years after postmodernism took up instability of identity, social constructivism, contingencies of meaning, language constituting reality, all that—and become a kind of perpetual irony machine—I’d wager, quoting Wittgenstein, “Everything we see could also be otherwise.” (Contingent enough, I know, and liable to be direct’d in any direction. I’d point it back into a fictive certainty—as opposed to what I keep calling a higgledy-piggledy smarm, hands wash’d of any and all correspondences.)

One thing. Remind’d of Davenport’s eponymous story in The Jules Verne Steam Balloon wherein one meets a “daimonic trio” of balloonists—Quark, Buckeye and Tumble. So reverse-reminiscent of Pynchon’s recent “Chums of Chance” in Against the Day. In Davenport’s story the balloonists “obey the voices of invisible consiliarii.” As Quark says: “Where are we when we aren’t here? I wonder if we know. It is left to us to rig out our expeditions. We got the balloon out of book of pictures, and we get our clothes where we can, and our food, as when we’re inside a system we have to live in its structure . . . We don’t remember all our assignments. And once they’re done, it wasn’t us, somehow, who did them, you know? Actually, Tumble said, they keep things from us, practically everything I sometimes think.” Pure Pynchon. Or Pynchon’s boys pure Davenport. 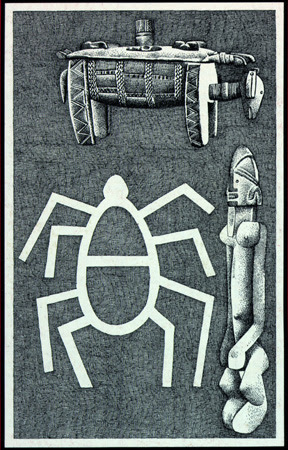 Pen and Ink by Guy Davenport