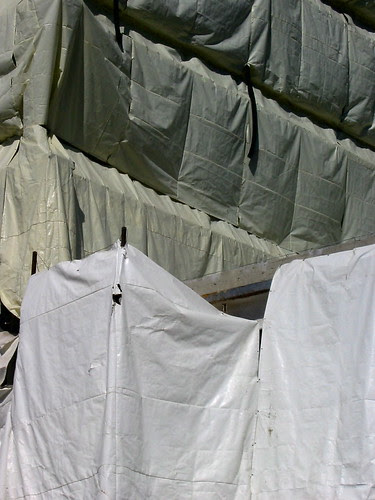 Odd to think that Stephen Crane’d be a mere four years older than Robert Frost. That spare pre-imagist verse—Crane call’d himself an “impressionist”—of Black Riders publish’d at age twenty-four. Louise Bogan—in a little book call’d Achievement in Ameican Poetry (1951), something I demob’d out of the cellar paperbacks yesterday, looking for Robbe-Grillet—Bogan calls Crane’s talent “natural and instinctive,” pointing to a combo of “initial awkwardness” and “early brilliance,” and hints that he “hardly developed.” (Which’d be about all one’d claim for any writer dead at twenty-eight.) I try to think of Crane, say, post-Pound, or amidst the The Masses cohort, or among the “proletarian” ’thirties writers, or writing about WWII.

It’s good to try to jump off the tracks of the thundering locomotive that is the innate historical (time) provincialism of the century, and the country, something “enormously and increasingly unavoidable” as one (oneself) participates (too) in the unending quotidian documentation of everything, so caught up in the vamping processional of now that one begins to assume a kind of pedigree regarding all one’s doings, one that scorns anything prior. So: it’s of some interest to note how Bogan, in a chapter call’d “Poetry at the Half-Century, 1939-1950,” rehearses the same marks of anxiety that apparently persist another half-century later. Her complaint: after the “richness and variety” of work that “exploded into being after 1912,” the epigones, the latecomers, “though generally far more informed and better equipped than their elders, found themselves functioning in a period of absorption, rather than in one of energetic projection.” She notes “a diminution of creative vitality,” “a stiffening of method,” “a drying out of emotion,” “a growth of self-consciousness,” “a return of skepticism and relative timidity,” a “tendency toward expertness and control,” and “a complete exhaustion of experimentalism.” The last, Bogan notes, “follows a natural sequence,” and proceeds to quote Eliot regarding the limits to any “extreme awareness and concern for language,” it being “something which must ultimately break down, owing to an increasing strain against which the human mind and nerves will rebel.” (A funny thing for a writer to say, even a nervous Nellie like the Possum.)

The paragraph that struck home, one I’d think apt (still!) in many of its particulars to the present:

Numerous young poets emerged during the forties. The works of some were brought on prematurely by the war; some still clung to Marxist dogma; others were pure experimentalists. Some moreover, were pedants; other merely learned and ambitious young men who had decided that the writing of poetry gave them prestige academic or otherwise. Very nearly all the members of this poetic generation functioned, to a greater or less degree, within the pervasive influence of the composite modern style—a style which was steadily returning, by degrees, to “form.” This style often served to cloak poverty of thought and immaturity of feeling. Thus, certain poets, by manipulating surfaces with skill, seemed more gifted than they actually were: they proved to be more fixated at childish emotional levels than a superficial examination of their writing had seemed to indicate.

That in 1951, just prior to the bust-out of the Beats. I like the Freudian “fixated”; I like the “composite modern style”—shorthand pejorative for what Bogan later terms “every trick of style,” probably akin to what people today mean by “burgeoning numbers of competing poetries” or the like—meaning, “exhaustion is pervasive and nobody knows what the fuck’s next.” I like the Platonic sigh of relief in “returning . . . to ‘form.’”

A few years later, in The New Yorker, when Bogan’s got the opportunity to see something different (the Allen anthology), she greets it with unfeign’d alarm, seeing the poems therein as largely a repetition of the earlier “1912” aberration. She writes: “History seems to have fallen in a heap upon the minds and sensibilities of many members of the latest American ‘school’ of poetry.” Bogan identifies that “school” as “a late and peculiarly American development of the post-Symbolist revolt, which brought in, very nearly fifty years ago, Dada and Surrealism,” (note how everything “other” than that magisterial unidentify’d “form” one “returns to” gets subsumed into a single “heap,” too, in Bogan’s version). And, following a veritable extravaganza of rhetorical fury (complaining of “the hitting, smashing, struggle, hallucination, and disorder” in the poems in The New American Poetry, and demanding, with no evident irony, “are many of them actually out of control?”), she asks “What degree of anarchy can be projected in poetry?” Answer, Bogan: “. . . when [poetry’s] principal tenets and accepted formal procedures are assaulted with utter vigor, this art of language does not merely change, it totally disappears.”

Is the upshot simply that adage-on-the-spot: “every old dog ain’t budgin’”? Where “dog” is a whole motley generation (every generation) convinced of its “advance”? (If not convinced of its “advance,” convinced its brave beleaguer’d steadfastness’ll not go unrecognized?) I don’t know. Everything repeats itself with fastidious lack of repercussion, that’s art’s cyclical self-twitting. Plus ça change . . . choristers, get ready to hum. In 1958—again, now, a half-century back—Bogan wrote (in a New Yorker review of the Hall-Simpson-Pack anthology): “Nowadays there is a widespread belief that close contact with academic life is dangerous for the creative artist; he is warned, on all sides, that any relationship with institutions of learning will cause his gifts to dwindle, if not totally to disappear. In spite of such warnings, poets of the younger generation have taken to the teaching profession in numbers, and some of the results of this association are coming to light.” Which is precisely true again today at the great institutions East, West, and New Coast alike. And the results, too: no different. Again, one sees poems “notably free of the coldly elaborate, the foolishly excited, and the gloomily bardic.” Again, one sees poems wherein “few rebellious notes are openly struck.” Yuh.