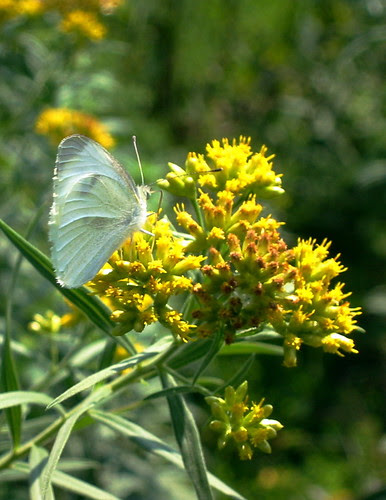 Finish’d Nabokov’s The Gift. What Nabokov needles, again and again: “inflated, exaggerated time” and its counter-compression, the merest slip or slice. And the copy, the double, the mimic: “In my vicinity some witch doctors with the wary and crafty look of competitors were collecting for their mercenary needs Chinese rhubarb, whose root bears an extraordinary resemblance to a caterpillar, right down to its prolegs and spiracles—while I, in the meantime, found under a stone the caterpillar of an unknown moth, which represented not in a general way but with absolute concreteness a copy of that root, so that it was not quite clear which was impersonating which—or why.”

The Nabokovian imperative: that one inform oneself absolutely of the particulars of one’s surroundings. Upshot to a lively catalog of Lepidoptera (“A few Black-veined Whites flew about lazily; one or two were spattered with bloodlike pupal discharge (spots of which on the white walls of cities predicted to our ancestors the fall of Troy, plagues, earthquakes). . . . A blue-and-red Burnet moth with blue antennae, resembling a beetle in fancy dress, was settled on a scabiosa in company with a midge. Hastily abandoning the meadow to alight on an alder leaf, a female cabbage butterfly by means of an odd upturn of her abdomen and the flat spread of her wings (somewhat reminiscent of flattened-back ears) informed her badly rubbed pursuer that she was already impregnated . . .”) is the claim that one, by considering the natural “blend” of species, “could infallibly tell both the age of the summer (with an accuracy almost to within one day), the geographical location of the area, and the vegetal composition of the clearing.” Updating the ancient book of nature.

(And mocking the “materialists” whose “constant appeal to trees is especially amusing because they are all so badly acquainted with nature, particularly with trees.” And, too, sheltering himself, through sheer pyrotechnics and gleeful audacity against the prevalent storm of criticules and writers who’d insist that those “incapable of being animated by sympathy toward what is being accomplished around us by the force of historical movement . . . will never in any circumstances produce anything great,” for “history does not know of any works of art that were created exclusively from the idea of beauty.”)

Nabokov—the “verbal adventurer”—’s sense of “the impossibility of having the imagery . . . germinate without contaminating [it] with a kind of secondary poetization, which keeps departing further and further from that real poetry with which the live experience of these receptive, knowledgeable and chaste naturalists endowed their research.” (Nabokov’d be loath to admit how Poundian that sounds, “the natural object is always the adequate symbol.”)

Nabokov’s humor: good-natured cuffs bury’d amidst disorder’d and plangent scènes typiques. In the middle of a winter departure, love’s failure, the “she was taking away with her absolutely everything” sob, an antic and singular half-sentence: “Her big arctics and tiny muff.”

Defending one’s solitary against the presumed solidarity: “One blamed him for being derisive, supercilious, cold, incapable of thawing to friendly discussions—but that was also said . . . about anyone whose thoughts lived in their own private house and not in a barrack-room or a pub.” Or pointing to “unions in the world which don’t depend at all on massive friendships, asinine affinities or ‘the spirit of the age,’ nor on any mystical organizations or associations of poets, where a dozen tightly knit mediocrities ‘glow’ by their common efforts.”

And a warning, likely unheeded: “you sometimes say things chiefly calculated to prick your contemporaries, but any woman will tell you that nothing gets lost so easily as a hairpin—not to speak of the fact that the least swerve of fashion may make pins obsolete: think how many sharp little objects have been dug up whose exact use not a single archaeologist can tell!”

Where did I bang up against Ausonius, the Roman stuck off in Bordeaux? He compares the cento to the Greek puzzle call’d ostomachia:

There you have little pieces of bone, fourteen in number and representing geometrical figures. For some are equilateral triangles, some with sides of various lengths, some symmetrical, some with right angles, some with oblique . . . By fitting these pieces together in various ways, pictures of countless objects are produced: a monstrous elephant, a brutal boar, a goose in flight, and a gladiator in armor, a huntsman crouching down, and a dog barking—even a tower and a tankard and numberless other things of this sort, whose variety depends upon the skill of the player. But while the harmonious arrangement of the skilful is marvelous, the jumble made by he unskilled is grotesque.

Which somehow reminds me of the cynical sleight of hand that attempts to exchange Keatsian “negative capability”—that processual delight in the vagaries of compositional mystery, of moving by gut, by blind sonar thrill, by unseen penetralia of wonder—into something so stodgy-dull as “negativity” and thence flinging that down into the maw of “catachresis: the patently absurd ‘misuse’ of language, either as a mistake or a deliberate rhetorical strategy.” It’s a patently catachrestical move, a sly “figure of abuse.”