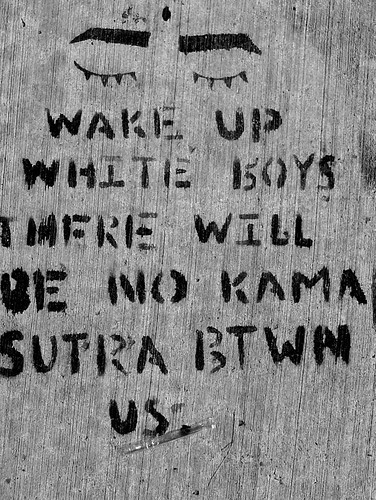 In the “Preface” to The Anathemata, David Jones writes:

Poetry is to be diagnosed as ‘dangerous’ because it evokes and recalls, is a kind of anamnesis of, i.e. is an effective recalling of, something loved. In that sense it is inevitably ‘propaganda,’ in that any real formal expression propagands the reality which caused those forms and their content to be. There are also to be considered the contingent and more remote associations which those forms and their content may evoke. There is a sense in which Barbara Allen is many times more ‘propagandist’ than Rule Britannia. The more real the thing, the more it will confound their politics.

Why, thinking about the efficacy of poetry, would I keep recalling a few lines out of Barrett Watten’s log in the recent snatch of The Grand Piano? He’s retro-worrying about where he’d come up with $900 for a Saab, and, in an oddly presumptuous brief, writes:

Mechanics who dealt with me at the time hated to see me coming. I remember a series of love / hate relationships with mechanics. I must have conveyed an affect of raw vulnerability and unfocused aggression to them. An effect of the exposure I had been through—to nothing they could imagine.

A curious four sentences amidst what is mostly a series of recollectings of “the designated others,” and “dazzling” and “revelatory” sex (“The sincerity of sex is finding oneself at the extreme of desire, and locating another there.” Which sounds like a successful field trip, if nothing else.) The mechanics though, plunk’d into the middle of Watten’s ruminant regarding of “the problem of other minds”—a rather unwelcoming way to put it: whence the completely confident idea that they’d be incapable of conceiving the “exposure” Watten’d “been through”? The audacity! (as my English grandmother’d say). To so automatically and prooflessly put oneself beyond another human’s comprehension, raring up like a stallion . . .

Throughout the Watten piece is dribbled lines out of something he and Benson cook’d up in 1978 (“after a disastrous encounter with a person of the opposite sex”—odd way to talk). Titled “Non-Events”:

Pale submission arises in the climate
of relative work. Death becomes
a small building in a blinding wind.
Every trivial verity dislocates the perfect
tower of dreams. The private tension
telescopes horizons into points.
Hysteria annihilates clear ideas to clash
of precursors bursting through technique.

Whatever. Singable (to the tune of “Barbara Allen”) by some “other mind,” (“but not mine,” as Patti Smith used to snarl.) Watten writes: “To accomplish my portion [odd way to talk] of the text, I sampled material from two sources: the opaque manifestoes of the Russian Constructivists and the personal / processual epic of Theodore Enslin, which I have said I disliked. Self met other in a capacious unfolding of obdurate language.” (Add easily-made stinging rejoinder here. “Stinging” “with” “humor.”)

One succumbs to notes. Is there an undue emphasis on “error and vulnerability” (“it is essential to overcome such defective aspects of one’s personality”)? In the fine labor of typesetting and correcting proofs, for christ’s sake? Odd references to armor and order and control permeating the clips: “A primitive continent in the head / cries out for armor.” “Muscular ABC’s correspond to / schematic interior stage-settings.” “Daily life arises from fear of reprisal.”

Zukofsky says the function of poetry is to “record & elate.” I’d settle for that. Against this study’d pile of hardware, resisting what exactly? Creeley, according to Watten, put it: “‘The problem with you guys is . . . you’re intellectuals. Too effete. Why don’t you get off it and talk to the people.’” (Which puts a whole different spin to Grenier’s shouting moment: “I HATE SPEECH.”)

“The more real the thing, the more it will confound their politics.”