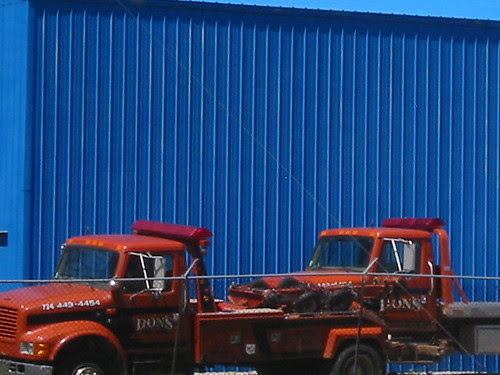 In Vladimir Nabokov’s terrific little book about Gogol, one’s inform’d that Gogol’s “big sharp nose was of such length and mobility that in the days of his youth he had been able (being something of an amateur contortionist), to bring its tip and his underlip in ghoulish contact.” And of the grotesque death of Gogol, “put to bed with half-a-dozen plump leeches affixed to his nose.”

Nabokov’s summary of an early Gogol story wherein a man, Ivan Shponka, “a meek, impotent Ukrainian squire” is being bully’d by a “formidable highhanded aunt” into “marrying a neighbor’s big blonde daughter”:

He dreamt that he was already married; and everything in his small house was so very unusual . . . instead of his bachelor’s bed a double one stood in his room; sitting on a chair was his wife. He felt all queer not knowing how to approach her . . . , or what to say, and presently he noticed that she had a goose-face. Happening to turn aside he saw a second wife . . . and she had a goose-face too. He glanced in another direction and lo, there was a third wife standing there; he looked back and saw yet a fourth wife. Dull panic seized him: he ran out into the garden; but it was hot outside and so he took off his hat—and saw a wife sitting in his hat . . . He felt the sweat on his face, groped for his handkerchief—and there was a wife in his pocket; he took the cotton wadding out of his ear—and there sat yet another wife.

After that nuptial onslaught, things unravel. He is skipping on one foot whilst (because) the aunt informs him that he must (“you are a married man”). He attempts a rejoinder and she turns into a belfry. He’s dragged up the belfry by a rope. He asks “Who is dragging me up” and hears “It is I, your wife, dragging you up, because you are a church-bell.” Then Ivan Shponka’s wife becomes a kind of woolen fabric: he is entering a shop where he is told “You had better take some wife, it is the most fashionable stuff, and very solid too—all the gentlemen are marking themselves coats of it nowadays,” only to be told by the tailor to whom he carries a bolt of the stuff that it’s no good, “nobody makes himself clothes of that stuff nowadays.”

Related at length in order to suggest that Gogol pushes beyond the regular scapegoat for that kind of thing: normal revery-itinerary (that dullness, somebody else’s dreams). Making me think the kind of things Daniil Kharms and the OBERIU writers didn’t emerge out of nowhere (though, in skimming around in the Kharms books I locate, I see no mention of Gogol). Kharms himself did though write a short piece titled “Pushkin and Gogol” (1934) wherein—

GOGOL falls out from the wings on to the stage and quietly lies there. PUSHKIN appears on stage, stumbles over GOGOL, and falls.

PUSHKIN: What the devil! Seems I’ve tripped over Gogol!

GOGOL: (Getting up) What a vile abomination! You can’t even have a rest. (Walks off, stumbles over PUSHKIN and falls) Seems I’ve stumbled over Pushkin!

PUSHKIN: (Getting up) Not a minute’s peace! (Walks off, stumbles over GOGOL and falls) What the devil! Seems I’ve tripped over Gogol again!

Et cetera, across the stage into wing opposite. Which surely must come out of Kharms as hydra-head’d mockery: of the two major precursors (stumbling against one another for advantage); of the notion of “belatedness” (something here in Kharms’s attitude is similar to Ginsberg’s Whitman eyeing the grocery boys—making of the “father” something befitting the son—there’s a paragraph, too, in Kharms’s “Anecdotes from the Life of Pushkin,” that goes “Pushkin had four sons and they were all idiots. One of them couldn’t even sit on his chair and kept falling off. Pushkin himself was not very good at sitting on his chair, either. It used to be quite hilarious; they would be sitting at the table; at one end Pushkin would keep falling off his chair, and at the other end—his son. What a pain these saints can be!”). Or “hooligans” (that load’d word of Soviet Russia—Kharms’s Pushkin achronologically accuses Gogol of “sheer hooliganism” after tripping over him . . .

Nabokov suggesting that, with Gogol (fill’d with secondary characters, histrionic asides, dead ends): “the charm of his allusions is exactly that nothing whatever comes of them.” (Gogol’s refusal of that horror of horrors, the well-made story. Nabokov: Gogol’s “knack of thoroughly planning his works after he ha written and published them.”)

Nabokov: “by poetry I mean the mysteries of the irrational as perceived through rational words. True poetry of that kind provokes—not laughter and not tears—but a radiant smile of perfect satisfaction, a purr of beatitude—” (Or that peerless purr-less state of near choking, a guppy caught in one’s throat, one’s dainty cat teeth all chomping to stifle a thousand yawns of excitement . . .) One’s liable to experience that very thing when Nabokov—mid-paragraph—suddenly slides off into a “laughter is bury’d in slaughter”-style skid. About Gogol. post-Government Inspector (a big success):

What seems to have tormented him above all was the knowledge of being talked about by thousands of people and not being able to hear, let alone control, the talk. The buzz that reached him was ominous and monstrous because it was a buzz. The pats he received on his back seemed to him to imply ironic sneers directed at people whom he respected, so that these sneers were also directed at himself. The interest that perfect strangers showed in regard to him seemed alive with dark stratagems and incalculable dangers (beautiful word, stratagem—a treasure in a cave). I shall have occasion to speak in quite a different book of a lunatic who constantly felt that all the parts of the landscape and movements of inanimate objects were a complex code of allusion to his own being, so that the whole universe seemed to him to be conversing about him by means of signs.

What book is that? It hardly matters, the swerve into it executed so stunningly. (In any case, it’s not forthcoming.)