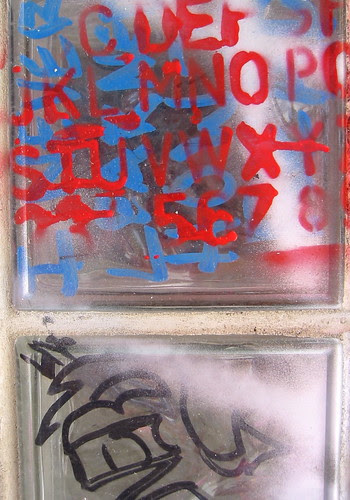 Why the obfuscatory code of initials Barrett Watten deploys in pamphlet three, all that reference to C—, L—, H—, the “other C—,” and D—, as if one’d got struck in the head by a fat nineteenth-century Russian novel? What’s liberatory about withholding knowledge? (Okay, most of it’s a puny historical lather of congresses and couplings—and who cares about who had sex with whom, frankly the whole subject (with name of Watten append’d) is enough to set my teeth achattering, arctic airs nipping the taiga, its conifers . . .) Except: why, say, code-name “N—”? N— visits:

I do not remember the day N— visited the apartment Ron and I shared at 17th and Missouri in 1974. There was someone at the door. Who was that, I asked? Oh, some guy who came up from Santa Barbara because he was interested in my work. What do you think of him? I’m not sure. What could such a visitation have meant to either of us at the time?

A “visitation”? (Betray’d by language: sounds like N—’s either a godlet or an alien.) Later Watten meets N— in New York, in the company of Ted Greenwald and Tom Raworth (names spell’d out here). Watten: “We had a heated discussion over the question of originality, and whether his writing could be compared to mine. I argued for their difference; he insisted that there was something in common between us. I had not yet seen much of his work—and would not publish any of it until 1978 in This 9.” Whom, it is now permissible to inquire, wedging one’s monocle into the cave of ’s one good optic, did Watten first include in said issue? Alan Bernheimer, Charles Bernstein, Abigail Child, Christopher Dewdney, Michael Gottlieb, Carla Harryman, Lyn Hejinian. Scratch the women, unless Watten’s being particularly devilish with what now seems less simple initial (no N’s in evidence in the magazine), and more spurious cover. On the heels of the “revelatory” This 9 comment, Watten writes: “That same year saw the beginning of L=A=N=G=U=A=G=E (but not the concept of language in poetry, as is now understood). We then walked halfway up Manhattan, talking nonstop all the way . . .” And, new paragraph, (wherein Watten scrutinizes the experience “like / you’re supposed to . . . if you can type”):

A moment of othering, in retrospect, for which I ought to have been more prepared. I often found myself in N—’s presence, talking nonstop. It was his refusal as well, which we both evidently enjoyed. There is a resistance of two languages that refuse to coincide—midway between enjoyment and denial. What is the relation of this moment to the concept of language?

So. One’d willingly put the one’s whole ratty collection of This offprints (and the second-wave feminist boot-heel tromp’d copy of The Maintains) up against anybody’s denial that the seeming alpha-male that is N— is Charles Bernstein. B-b-b-but: why the subterfuge? That business about the “resistance of two languages that refuse to coincide”? I think that’s call’d argument, or, pigheaded argument or, mutually pigheaded argument. It’s upshot is usually either a liberatory restless uncertainty (no ground), or adamant ideology-mongering (see stuck-in-the-mud-ism.)

Sidetrack’d by re-reading the Watten lines. (Admittedly, I’d only pick’d amongst the entrails previously—crow with squirrel.) Ted Pearson writes a fine appraisal of “the problem of other minds”—clarity of argument (“we can know other minds exist because, as social beings whose existence entails our interdependence, our concept of mindedness is socially constructed (in natural language, and among other minds) and, as Wittgenstein convincingly argues, words qua concept are defined through application in communally practiced language games”) interspliced with situating memoir-snippets. Two things jump out.

One: Pearson writes, after recalling the project’s origins / emergence / hatch in 1973 “in the park on Ile Rousseau” in Geneva: “Now completed, The Tune’s Image comprises eighteen books in a single serial work.” Terrific news. Latecomer to Pearson’s work that I am—I first read it in Songs Aside: 1992-2002 (Past Tents, 2003) and liked it enough to put it in my Attention Span list that year (and to scoop up—in a complicated exchange—several earlier books that Peter Riley had.) It’ll be a pleasure to see it whole.

One sometimes hears that, in those days, the Language poets ran a closed shop—a perception of exclusionary practices that apparently persists in some quarters. And I want to take that up. [Faintly Bush-inflect’d querulous weary-whiney tone there?] In my experience, [Old hand talk.] such claims reflect the social or literary anxieties (if not anomie) [Terrific word: undistributed lawlessness, wrong usage, uncustomary doings, see nimble.] of their claimants, who then project these anxieties onto others who are presumed to have caused or to have failed to allay them.

Brilliant the way popular Freudianism gets used to slip off the hook of something that is already apparent in the mere phrase “the problem of other minds.” “Problem”? Witness Pearson’s own desire to put it “under erasure”: “Parsing Barrett’s question, I was drawn to the verb “address”—and then given pause by its object, “the problem of other minds.” My first thought was: put “the problem” under erasure and proceed to the question of address.” Or witness Rae Armantrout’s earlier admission of “wondering whether I was in or out of the new nexus.” If its “members” see fit to query standing so openly, isn’t it fair to assume some control leverage in the works, probably more obvious to an outsider? Pearson’s language is riddled with the language of control: I am partial to “claimant” with its quasi-legal dismissiveness. (Henceforth, I’ll begin my notes: “May I please approach the bench?”) I am partial, too, to “anomie,” and “social and literary anxieties,” an hilarious attempt to fob off consider’d (negative) criticism on some disorder’d individual, some misfit maladapt’d, some heinous social romantic, some “I don’t have any paper so shut up” kind of uncontrollable ape . . .

This 1, Edited by Barrett Watten and Robert Grenier