Leslie Dick, one paragraph out of “Seventeen Paragraphs on Kathy Acker”:

When I knew her, in London, Kathy had two lovebirds called Eulalie and Legba, after Voodoo gods. She decorated their large cage with many mirrors and other trinkets, and she made faces and cooed at them at frequent intervals. Sometimes I felt she imagined herself to be a lovebird, with her odd face elongated into a parrot’s beak. She spoke to her bids in their language, and was delighted by their cooing replies. When eventually one of the birds became ill, she found it unbearable to watch the bird die. In the end, she took the expiring lovebird and carried him outside her flat, to place him gently on the ground under a bit of shrubbery. She told me that after turning away tearfully, she saw a cat wandering around, and she was convinced Legba had met his end in the cat’s jaws. This scene gave her a certain ironic satisfaction: when things got rough, it confirmed her deeply held view that everything was both terrible and meaningless, and this confirmation seemed almost to strike a balance; it made the spinning world steady for a time. Her sense of dark comedy came through, at the very same time as a practical acknowledgement that this was the limit, she wasn’t going to go through this again, so could I please come in my car to drive her and the surviving lovebird across London to Mile End, so she could give the bereft bird back to the man she’d bought them from originally, and be rid of the whole thing. It was a long drive, in traffic, and on the way back we stopped for a swim in a big municipal swimming bath, its water heavy with chemicals suffusing the damp air. We rented our bathing suits from the Borough, and afterwards our skin reeked of chlorine.

Something of a fugitive sentimentalist there calls to the fug. sentiment. in me. Something desperate about renting “bathing suits from the Borough”—a State apparatus for State-sanctioned apparel for the State-sanctioned intimacy of public swimming. Something about “water heavy with chemicals” that throws up whiffs of breeder-reactor talk, its heavy water, hard behind “Mile End.” As if, when all is “both terrible and meaningless,” any moment of “balance” struck by a world’s never-casual event can only be apocalyptic. (Though all that misses the miscible delight in the pleasant absurdity of the situation—returning a lovebird, swimming in city-rented suits—all overlaid semi-antiseptically with chlorine.) Huh.

Dick’s writing is out of Lust for Life: On the Writings of Kathy Acker, edited by Amy Scholder, Carla Harryman, and Avital Ronell (Verso, 2006). Other pieces by Peter Wollen, Ronell, Harryman, Robert Glück, Barrett Watten, Lawrence A. Rickels, and Nayland Blake. 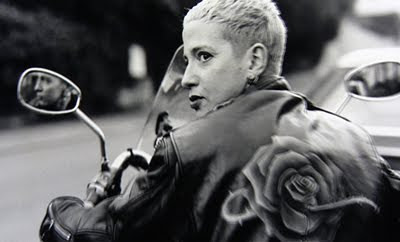 How We Talk When We Talk About Art

That is, me. Over coffee and bagged lunch debris, with Aaron McCollough yesterday.

—I don’t know what I’m doing. I keep thinking I’d like to write some prose poems. I can’t write prose poems. They come out just so incredibly dense, one big unreadable clot, terribly dense, like a turd.

And I make my hands into a spheroid, airy enough, though the assemblage is shaking as if under immense pressure. About the size of a baseball, regulation International League style.