Lately I find myself reading, rereading Schuyler. Thumbing the Collected randomly, seeing what it’ll toss up. Moreso Schuyler these days than O’Hara, whom I truckled with endlessly “in my youth.” Less so, Ashbery. Ashbery remains a series of tics gracing the horizon, regular as sunrise, and set. (I mentally adjudge the New York School, its “members.”) I never whole-heartedly followed Guest, Edgar’s sparse and abstract sister. Too sparse, too abstract. Too few the nuggets in that stew, patter and plash out of (into) the beyond. The one I always forget—Koch—the least “touched” one. “Zany,” yes, and perseverant, yes, and “likeable,” just not “touched by the gods.” Something bonhomie country club about him, the same way there was about William Matthews, the other Cincinnati boy.

I only ever witnessed two of the five reading: Koch in Paris (circa 1980, rue du Dragon, some American cultural joint, decidedly not for the nitty-gritty), Ashbery in Ithaca (circa 1982), and in Charlottesville (1990). Ashbery’s performances dry as sandpaper (“Here’s what I think of as my disco poem,” preceding a decidedly un-thumping rendition (barely audible) of “The Songs We Know Best”):

Just like a shadow in an empty room
Like a breeze that’s pointed from beyond the tomb
Just like a project of which no one tells—
Or didja really think that I was somebody else?)

Et cetera. One thought often he must be busy squelching an ornery pocket of gas, so uncomfortable did he look.

A wonderful freshness, air
that billows like bedsheets
on a clothesline and the clouds
hang in a traffic jam: summer
heads home. Evangeline,
our light is scoured and Nova
Scotian and of a clarity that
opens up the huddled masses
of the stolid spruce so you
see them in their bristling
individuality. The other
day, walking among them, I
cast my gaze upon the ground
in hope of orchids and,
pendant, dead, a sharp shadow
in the shade, a branch gouged
and left me “scarred forever
’neath the eye.” Not quite. Not
the cut, but the surprise, and
how, when her dress caught fire,
Longfellow’s wife spun
into his arms and in the dying
of its flaring, died. The
irreparable, which changes
nothing that went before
though it ends it. Above the wash
and bark of rumpled water, a gull
falls down the wind to dine
on fish that swim up to do same.

The way the air (and so quickly!) transforms itself in the materiel of its surroundings: bedsheets, clouds, automobiles, one pictures the early-autumn industry of leaving summer squats—ferry boat lines, Great Spruce Head Island.

The way “Evangeline” is so humorously off-register: is it addressing Charles North (as it may, witness the camp salutations and signatures in Schuyler’s letters (“Dear Tempest Storm,” “Dear Kewpie,” “Dear Beany Bacon Dip . . .”) or is it angelically modifying “light”?

The way the clarion call to Lady Liberty in that “huddled masses / of the stolid spruce” points right “back” to New York City, and reminds one of O’Hara’s cheeky inability to “even enjoy a blade of grass” unless “there’s a subway handy, or a record store or some other sign that people do not totally regret life.”

The way the “incident” of “The other / day” goes literary (“cast my gaze”), a way of providing it with the proper perspective: not of any import, being poked by a stick, whatever sense there is in reporting it is in the manner of doing so: a kind of James Brownian imprecation (“Now watch me work!”) and Brown doing a microphone toss and spin only to fall in a big heap, only to haul himself up “tragically”—fool and witness both.

The way the literary vamping rounds itself off with Frank O’Hara’s line (“scarred forever / ’neath the eye”) out of a sassy sonnet sequence (“A City Winter”—“thus to be eaten up and gobbled down / volcanoes of speedometers, the strike / that heats the iris into flame and flow’rs / the panting chalice so a turning pike: you are not how the gods refused to die / and I am scarred . . .”—a sort of early “Easter”)—something Charles North would likely notice, and pleasurably.

The way Longfellow’s late entry tosses one back to “Evangeline” (“This is the forest primeval. The murmuring pines and the hemlocks, / Bearded with moss, and in garments green . . .”), that old dog of a virginal America, published in 1847, and into the tragic-comic vignette of Longfellow’s wife dying amidst a cartoonish flare-up, die down. (For the record, one Longfellow biography notes: “Longfellow’s wife died of burns she received when packages of the children’s curls that she was sealing with matches and wax burst into flames.” So be the calamitous occurrences in a world of moral lessons.)

The way the final lines—feeding gull meeting feeding fish at the mirror-border where air meets water point to the dichotomies that one’s caught only askance, out the corner of the eye: city and wilderness, masses and individuals, and all the liminal frontage-zones opposites nurture, the place where all change occurs. The “center” of the poem: “The irreparable, which changes / nothing that went before / though it ends it.” As brave as that.

Bluesman Clarence “Gatemouth” Brown’s story, writ, he says, “just to show the world that we are still in the back wood age”:

Last night here in Salt Lake City, 5/15/87, a copple of white men around there mid 30es came up to me to buy a record. One of them ask me did I know Lips Masicum who ever that is I said no. I did’ed. I’m sorry. I could see just how stupid they were. By just looking at them. The next thing he said was that the guy he call Lips Maskum play’d just like me. I said fine. But he would’ed stop there. His next word was could I play him or them a good old nigger bluse like BB King or Muddy Waters or Lips. My anser was I don’t and further more wont. I also told him to wate until they come to town, then he could have his nigger music.

A man capable of barking out, deep Texas-style: “That Goddamn Bush motherfucker—” and reprising the sentiment mid-song: 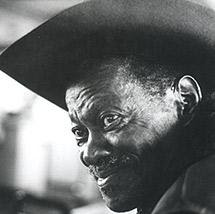