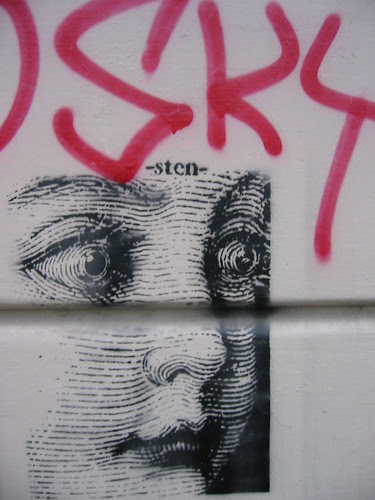 Allen Ginsberg, in Indian Journals (Dave Haselwood Books / City Lights, 1970), randoms out a prescient riff (the entry is dated July 8, 1962, Peter Orlovsky’s birthday, in Calcutta), detailing a lineage, a direction, and a self-assessment. One notes Ginsberg pointing to models and sources the language boys (some of whom were still in short pants) ’d come to claim later. Ginsberg:

Poetry XX century like all arts and sciences is devolving into examination-experiment on the very material of which it’s made. They say “an examination of language itself” to express this turnabout from photographic objectivity to subjective-abstract composition of words à la Burroughs.

As post-Einsteinean science is supposed to come to the frontier of objective research whereat the research instruments themselves are questioned, the human measuring brain is analysed as far as it can analyse itself, to see how the structure of the brain-mind determines the interpretation of the “outside” universe—now found to be contained in the mind perhaps & having no objective shape outside of the measuring mind.

So painting changes thru Cezanne to tricks of space, thru cubism to analysis, finally thru Action to the paint itself as the subject matter.

Now poetry instead of relying for effect on dreaminess of image or sharpness of visual phanopoeia—instead of conjuring a vision or telling a truth, stops. Because all visions & all truths are no longer considerable as objective & eternal facts, but as plastic projections of the maker & his language. So nobody can seriously go on passionately concerned with effects however seeming-real they be, when he knows inside all his visions & truths are empty, finally. So the next step is examination of the cause of these effects, the vehicle of the visions, the conceiver of the truth, which is: words. Language, the prime material itself.

So the next step is, how do you write poetry about poetry (not as objective abstract subject matter à la Robert Duncan or Pound)—but making use of a radical method eliminating subject matter altogether. By means of what kind of arrangements of words:

I seem to be delaying a step forward in this field (elimination of subject matter) and hanging on to habitual humanistic series of autobiographical photographs . . .

Art has always convinced us only by filling the painted plane or the written pages with a life of its own. Whenever precautions are taken to steer art, they merely confirm that it has a mind of its own. The more tightly art is bound, the more people fear the danger of its explosive energy. From this insight it is not far to the suspicion that not everything that claims to be exemplary conforms to the facts.

The slow calm execution of a work within a sequence solidified by tradition was replaced by a demand for originality, newness was attributed not to mature craftsmanship but to genius, and this pressure to be singular, to dedicate oneself to individuality led to isolation, to brooding, to the dominance of personal suffering, to surfeit, so that eventually art per se was called into question.

One, is it permissible (or, “smart”) to use lecture-lingo without a specific exemplar, or, uh, context? C’mon, Jordan Davis, spit it out. What, exactly, are you talking about? Such tsk-tsking!

Two, is all poked and de-bagged for our pleasure. My man “Man-Mental,” ’e’s a good one!