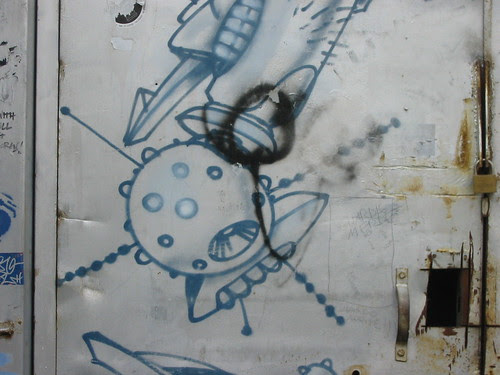 Blogland dims down tedious, de-effervesces. Same old same old is the stock in trade. The plodding earnest, the rosy enigmatic, the burnt-out goof. Camp-followers and flarf pretenders. Bourdieu-haunted collectors of cultural gimme caps. Sports wankers. Gushers. Pound: “We have no standards of accuracy that an optician or a physicist wd. recognize as other than sloppy and rascally.”

Dittolands, an Etherian idea of small town America mass-produced on huge space platforms and transported to Earth for jiffy erection in remote locales, on abandoned land. There were supposed to be hundreds of them all over the country inhabited by a skillfully integrated population of human collaborators and Etherian copies of real Earthlings. In Dittoland out for a jog you just might run into yourself.

Scan for a nano-second the one hundred recentest photographs posted here, endless mediocrity, endless Blogland aggregate: not one singes the eye. Poppy-fever and candy quim indistinguishable. Cartoon nada shellacked with incoherent color. All the rapier wit of a tuna salad.

“Let us bookmark this moment of critical arrogation at a specific historical moment—the moment of the early reception of the Language school in academia, which led to much . . .” So Barrett Watten. If you be one for whom the equals sign’s grim historical presence matters a whit, read the several pages of rehash here (Post 27). Me—? Lord save my sunset years for something more edifying than turf-defending.