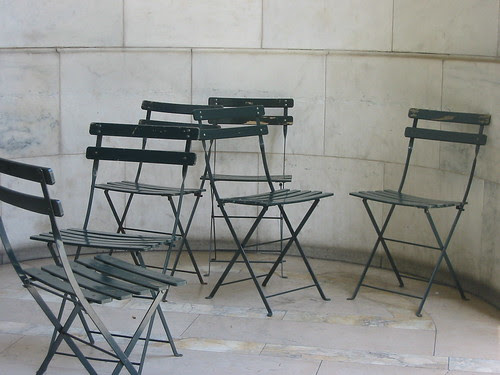 
“In the mountains
the finches

“What are these songs
Straining at sense—
You the consequence?”

Peter Weiss (The Aesthetics of Resistance) on how literature’s world is one “seen through the eyes of those who owned it”—hence, the preoccupation with things. (He’s talking mostly about the rich descriptive catalogues of—the “furnishings” of—nineteenth century fictions, though Williams’s “No ideas but in things” plunks down its heavy bourgeois baggage rather hastily in my reading of it . . .):

Ownership molded the attitude that was taken toward things, while for us, to whom the living room never belonged and for whom the place of residence was a matter of chance, the only elements that carried weight were absence, deficiency, lack of property. There was no wasting any breath about it, at that moment I could not have mentioned anything but the iron can opener that I saw lying on the buffet, shaped like a herring, the lower jaw protruding as a bayonet-like cutter, it had already existed in Bremen, I had played with it, no doubt, and my mother had taken it out of my mouth. Otherwise we had no time to think about the frugality, our life story consisted more of figuring out how to get through the next few days and weeks, how to pay the rent, than of registering objects among which we were barely tolerated.

And how should writing even be possible for us, I asked myself . . . If we could grasp anything of the political reality we lived in, how might this flimsy, dwindling material, which could be obtained only in dribs and drabs, ever be converted into a written page with a claim to continuity. Tranquil and persistent research and reflection were beyond our reach. The events thronging in on us forced us to gain insights that became fierce reactions. They could lead to actions, but they could not be rounded off, could not yield an overview. They always had to remain fragmentary, had to be torn apart, wiped away by newly surfacing demands.

Not to imply that one’s own situation is pointed at here, or even any of one’s reader’s lives. After all, one is comfortably surrounded by things, fucking things. Imagine, though, a whole literature writ by those without.