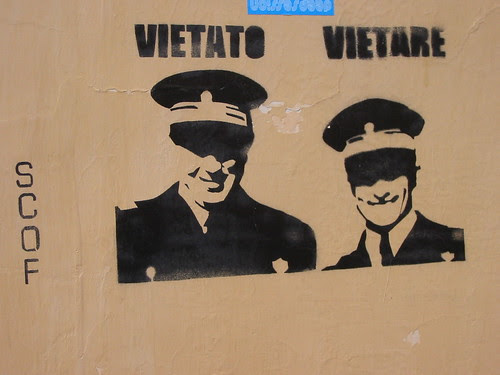 “The group instinct could be a good idea, but there is always some little dictator who wants to make his instinct the group instinct.” So Willem de Kooning, circa 1951, in “What Abstract Art Means to Me.”

Noticeable: increased policing in Blogland, or Dittoland as I like to call it. The frontier comradeship diminished. The barriers getting put up. The link-backtrackers, the douchbag-callers, the control-mollies, the comments-box-goaltenders, the filter-and-gefilte-fish crowd, the special-specious-invitations, the hit-counters, the whole gamut of notes on a sliding scale towards lockdown and rigidity. Reminds me of, is it Ron Padgett, or Guillaume Apollinaire—“You people of Dittoland, I don’t care if you, how I hate you, alive and all boarded up . . .” or is it Mary McCarthy (talking about Lillian Hellman)—“Every word she writes is a lie, including ‘and’ and ‘the.’” How I love that!

Galumphing around, looking for something else, I fall down into the Smithsonian Institution’s Archives of American Art, its collection of oral histories. And alight (notice how I’ve transformed myself—elephant to butterfly—by merely “entering the art world”?) here, amidst a conversation with Edward Hopper:

JOHN MORSE: Mr. Hopper, I'd like to ask you about one particular picture that made a great impression on me when I first saw it at the Whitney exhibition . . . That's Approaching a City . . .

EDWARD HOPPER: Well, I've always been interested in approaching a big city in a train, and I can't exactly describe the sensations, but they're entirely human and perhaps have nothing to do with aesthetics. There is a certain fear and anxiety and a great visual interest in the things that one sees coming into a great city. I think that's about all I can say about it.

JOHN MORSE: Well, in painting this picture were you aware of these wonderful solid geometric forms that took my eye at once?

EDWARD HOPPER: Well, I suppose I was. I tried for those things more or less unintentionally.

JOHN MORSE: Would you go so far as to say it's almost a subconscious result, effect?

EDWARD HOPPER: Yes, I think so.

JOHN MORSE: But what was in your mind when you were painting it, I gather then, was this feeling of approaching a city? 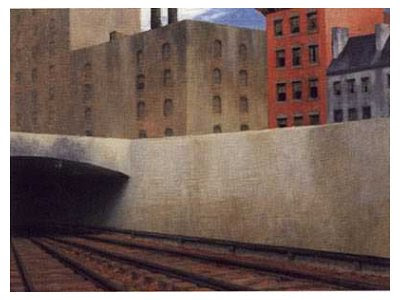 Getting through to the “public,” the “critic,” the “poet-critic,” that there is no intent so specific that it can be panned for the gold that is not its result. (Maybe I could say that differently.) Anybody worth him’s salt ain’t going to do up that aspect of recalcitrance known by the name of “theoretical model”—if them’s do, they’ll assuredly find the “art work” (an oxymoron) falled all down all down the front of theyselves in a dribble, no? (Maybe I could say that differently.)

Hence the enormity of my distrust of those who have mapped out a program, a style, a (chance) method, the “next poem.” Bah!

(And here I thought I was going to provide a plangent assessment and distillation of The Aesthetics of Resistance today!)