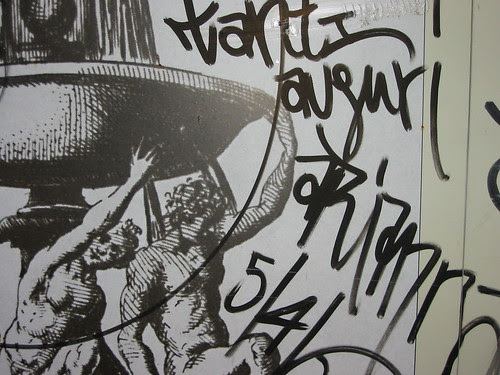 Spiritually I am wherever my spirit allows me to be, and that is not necessarily in the future. I have no nostalgia, however. If I am confronted with one of those small Mesopotamian figures, I have no nostalgia for it but, instead, I may get into a state of anxiety. Art never seems to make me peaceful or pure. I always seem to be wrapped in the melodrama of vulgarity. I do not think of inside or outside—or of art in general—as a situation of comfort. I know there is a terrific idea there somewhere, but whenever I want to get into it, I get a feeling of apathy and want to lie down and go to sleep. Some painters, including myself, do not care what chair they are sitting on. It does not even have to be a comfortable one. They are too nervous to find out where they ought to sit. The do not want to “sit in style.”

Against what, one puts down Peter Weiss (The Aesthetics of Resistance):

But who . . . logs the patience with which most of the people here live, since it is part of their very nature to view everything regarding their own condition as not worth communicating, to be self-effacing and hold their tongues about it all. Such an attitude . . . revealed a certain background. If you . . . had had a bourgeois upbringing, you would come with the assurance that everything happening to you concerns you and challenges you to express your opinion. Wherever you wound up, you could as a matter of course, claim any situation for yourself. Instead you still bear the weight of experiencing your inferiority, you believe that no none wants to listen to you, you are uncertain as to how your studies can be utilized, expressed. This is something . . . that I have repeatedly found in conversations with young workers, they shy away from transmitting their knowledge because they are filled with the scorn shown by others, because they already sat of the sidelines in classrooms, allegedly with no calling for science, scholarship, art, for running a business, predestined to enter the machinery as soon as possible, at the very bottom.

Trying, as always, to rub up a little conflagration, or, contrarily, make mischief glow with a possible nuance, something scumbled out—or stenciled in—by the merest juxtaposition. My ongoing argument for metaphor, not a veering off into something “other,” rather, a concatenating of immiscibles, new revealing, new solution, new noise. Useful slurry, to patch a gap where none existed before. Weiss:

Thus the extended vanishing lines of the contours of Feininger’s houses opened up an entire city, and, spraying like comets, the shapes on the tower of the blue horses introduced a vitality that could never be reached by conventional methods of representation. Such surprising depictions, based not on a closed aspect but on a multivalence, supplied more details than static arrangement could about the mechanisms we lived among. Characteristic of that ambiguity was its ability to get the imagination to seek links, thereby expanding the realm of receptivity.

What’s incomprehensible is how Weiss’s novel is only now, thirty years after its publication in German, being translated and made available in English (by Duke University Press, the first of three volumes is out).