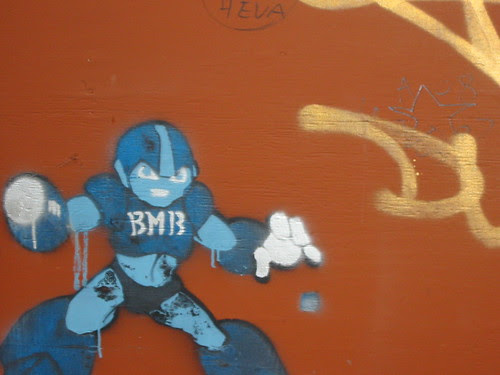 Notes on method in a period of fugitive temporality (“tempus fugit,” as Norman Mailer says to Ed Sanders somewhere in the annals . . .). Trying to collect what few morcels in reading that spur a line of thinking. Often the line goes unspelled. Collecting notes for future use, that is, well aware that most often there simply is no future. One does whatever one can, and makes public one’s paucity of results. The other approach, a kind of intellectual hoarding, hints without recklessness, strikes me—today—as abhorrent, superficial. I’d rather my superficies be stuck down raw. Refuse on a shore.

Peter Weiss (The Aesthetics of Resistance), with a good definition:

A person belonged to the working class if he acted on its behalf no matter where he came from.

On Gaudí’s Sagrada Familia, found in Barcelona, en route to joining the International Brigades (one formula for an all-embraceable art-practice):

. . . compound of kitsch and architectural vision . . . it seemed to us as if the disinterested way of treating all artistic directions, the lack of a specific, so-called sure taste, had been the prerequisites for creating this monstrous and completely free-standing formation.

. . . the work may not have been carried through because the ecclesiastic and religious motives for the construction had lost all meaning, the devotional place had been erected around a drained idea, and that was why such a cathedral could only remain incomplete, could survive only as a fragment, find its value in a hyperreal omni-art opus . . . the edifice could retain its authenticity solely as a ruin . . .

(Me, aghast to learn that “in the middle of the Gran Via . . . the architect was killed, under an electric trolley, he was wrapped around the wheels, shredded, rolled up, in June nineteen twenty-six, the swift, jingling, and roaring thing ran over Gaudí’s private world.” Recall a morning—early ’seventies—of climbing high up in the open latticework towers, espying encrustations of organic gewgaws and boxy stone saints . . .)

On furtive art of a moment, revolutionary murals (here, in a mess hall for International Brigade fighters mustering in central Spain):

On a crude lime-washed wall in a stable furnished with the barest necessities, someone had painted a picture that gave no heed whatsoever to the provisional arrangement, it had been put into the haze of onion soup and black tobacco, staunchly it rose, with utter equanimity about the fact that cracks were already running though the plaster, that the thin layer of pigment would soon be scraped up and scratched up, would burst because of the humidity and the settling of the clumsily laid fieldstones, it defied its ephemeralness, it devoted the utmost of its abilities like the fighter in the field, it presented itself as if painted for a long duration, for the cosmic length of time we would be spending here in Spain, in an enormous concentration of energy, the picture stuck fast to the wall until with our victory or our defeat only flecks would survive, and it clung most obstinately where the strokes were most densely combined, in the faces, the hands.

To remark Dalkey Archive’s publication of Flaubert’s Bouvard and Pécuchet in a new translation by Mark Polizzotti (biographer of Breton, translator of Echenoz), a tiny Flaubertian catalogue—addenda welcome:

There is no demarcation between self and Other.

Fiction cannot teach a poet anything.

Realism (naturalism) is done for.

Nobody’s seen Thomas Pynchon since he ducked out on the Life magazine photographers at the marriage of Richard Fariña and Mimi Baez.