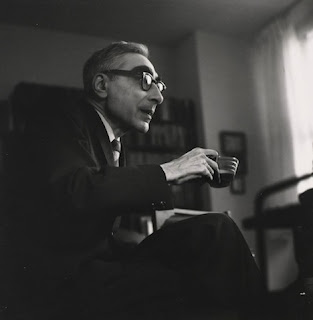 Louis Zukofsky, out of Bottom: On Shakespeare (1963): “Music implicit in the movement and pitch of the words is accessory to the desired order of sight.” One of Zukofsky’s musickings, out of “A”:

Hyaline: glassy, vitreous, smooth, clear (Milton’s “the cleer Hyaline, the Glassie Sea”). Musical notes, unseen, “buttressing” one the next in sequences, “arranging” a seeing (Zukofsky: “No air stirs, but the music steeps in the center— / It is not the sea, but what floats over it.”) Out of “A”:

The blood’s tide like the music.
A round of fiddles playing
Without effort—
As into the fields and forgetting to die.
The streets smoothed over as fields,
Not even the friction of wheels,
Feet off ground:
As beyond effort—
Music leaving no traces,
Not dying, and leaving no traces.

“Music leaving no traces, / Not dying, and leaving no traces.” Akin to Zukofsky’s insisting (Bottom: On Shakespeare) that “Shakespeare’s writing argues with no one: only in itself. It says: Love’s reason’s without reason . . . Flaming in the . . . sight . . . Love hath reason, Reason none. This writing exists as its own tempest . . . where thought is free (or necessary—the same difference after a while) and music is for nothing.” (“A”: “You are not to throw out your music / Grafted to the adequate, / Seen as the heart’s beat for more hearing . . .”)

Music, like love, “hath reason” without reason. That is, it is. Out of Bottom: On Shakespeare:

. . . that will be precisely the value of reading Shakespeare—or for that matter anyone who is worth reading—that is, the feeling that his writing as a whole world is, compelling any logic or philosophy of history not to confuse an expression of how it is with that world is. The thought that it is has, of course, no value, is rather of a region where thought is free and music is for nothing—or as eyes see and go out.

Eyes that “go out”—sight’s capture and quench—akin to musical notes’ sounding and extinguishment. (“A”: “The music brings up a vacuum thru which light / travels . . .”)

Music and seeing compounded. (Zukofsky’s integral “Lower limit speech / Upper limit music” is well and thoroughly quoted. One tiny addendum—how Dante “writing of the common speech” is Zukofsky’s fons et origo for the distilling. In the 1946 essay “Poetry / For My Son When He Can Read” Zukofsky proposes a definition of poetry thus:

. . . that matters worthy of the ‘highest common Speech—all that flows from the tops of the heads of illustrious poets down to their lips’—properly embrace the whole art of poetry which is ‘nothing else but the completed action of writing words to be set to music’—music being the one art that more than the others aims in its reach to speak to all men. Beside this definition of poetry, all other definitions of poetry would appear niggardly.

Personal preferred Zukofsky music: “Music, itch according to its wonts . . .” (Akin to Verlaine’s somewhat command in “Art poétique”: “De la musique avant toute chose, / Et pour cela préfère l’Impair / Plus vague et plus soluble dans l’air, / Sans rien en lui qui pèse ou qui pose.”) (In the C. F. MacIntyre translation: “You must have music first of all, / and for that a rhythm uneven is best, / vague in the air and soluble, / with nothing heavy and nothing at rest.”)
Posted by John Latta at 8:05 AM