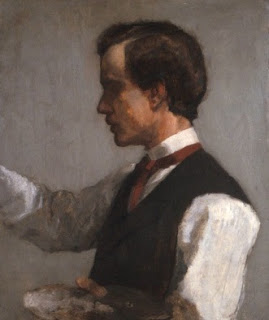 Stob-end of moon plugging the upturned basin of the sky. Swashy brushwork of clouds, the bowl’s scum and froth. Or the way the red-bellied woodpecker fell straight into the grass, its flat red helmet, its barred zebrine back. Emerson, out of the Journals:

We feel—do we not?—that every one of those remarkable effects in landscape which occasionally catch & delight the eye, as, for example, a long vista in woods, trees on the shore of the lake coming quite down to the water, a long reach in a river, a double or triple row of uplands or mountains seen one over the other, and whatever of the like has much affected our fancy, must be the rhetoric of some thought not yet detached for the conscious intellect.

No. Though the “catch” invariably provokes the sentence-ry. Niggling the delivery, how mimic that percept? The woodpecker long ago propelled up into the oaks, the human beast still weighing a ponderancy of vocables, a preposterous lingo of ciphers and naughts. Emerson’s contradictory mayhem. In the entry, too (7 October 1840):

The life of man is the true romance which when it is valiantly conducted, and all the stops of the instrument opened, will go nigh to craze the reader with anxiety, wonder, & love. I am losing all relish for books . . . I have been writing with some pains Essays on various matters as a sort of apology for my apparent idleness. But the poor work has looked poorer daily as I strove to end it. My genius seemed to quit me in such a mechanical work, a seeming wise,—a cold exhibition of dead thoughts. When I write a letter to any one whom I love, I have no lack of words or thoughts: I am wiser than myself & read my paper with the pleasure of one who receives a letter, but what I write to fill up the gaps of a chapter is hard & cold, is grammar & logic; there is no magic in it; I do not wish to see it again.

To write “to any one whom I love”—that crucible (see The Book of Quinte Essence: “and in þe corusible ȝe schal fynde þe gold calcyned and reducid into erþe”)—is to mete out what’s immeasurable, that excess, that satiety, that “gleep-gleep in the conglomerate goo.” So Shakespeare (what Louis Zukofsky begins Bottom: On Shakespeare with) out of A Midsummer Night’s Dream:

‘. . . and yet, to say the truth, reason and love keep little company together nowadays; the more the pity that some honest neighbours will not make them friends. Nay, I can gleek upon occasion.’

‘Things base and vile, holding no quantity,
Love can transpose to form and dignity.
Love looks not with the eyes but with the mind,
And therefore is wing’d Cupid painted blind . . .’

William James, out of the “Attention” chapter of The Principles of Psychology (1890):

Millions of items of the outward order are present to my senses which never properly enter into my experience. Why? Because they have no interest for me. My experience is what I agree to attend to. Only those items which I notice shape my mind—without selective interest, experience is an utter chaos. Interest alone gives accent and emphasis, light and shade, background and foreground—intelligible perspective, in a word. It varies in every creature, but without it the consciousness of every creature would be a gray chaotic indiscriminateness, impossible for us even to conceive.

And, out of a 24 August 1872 letter—James is in Scarboro, Maine—to Henry James (in Switzerland):

. . . Nature as to its essence is the same anywhere, and many nervous puckers which were in my mind when I left Cambridge in July have been smoothed out gently & fairly by the sweet influences of many a lie on a hill top at mt. Desert with sky & sea & Islands before me, by many a row, and a couple of sails, and by my bath and siesta on the blazing sand this morn. But I envy ye the world of Art. Away from it, as we live, we sink into a flatter blanker kind of consciousness, and indulge in an ostrich-like forgetfulness of all our richest potentialities—and they startle us now and then when by accident some rich human product, pictorial, literary, or architectural slaps us with its tail. I feel more and more as if I ought to try to learn to sketch in water-colours . . .

Always the danger of that “gray chaotic indiscriminateness” (and the dull and epurating note of “Nature . . . the same anywhere”). Art, its inoculatory boost. And note just how crocodilian and wild—belying that “essence”—art’s “rich human product” is . . . For Henry James’s part—he who’d written to William (9 April 1873) of how he’d “been in a state of ineffable languefaction,” adding, “The want of ‘tone’ in the air is altogether indescribable: it makes it mortally flat and dead and relaxing. The great point is that it is all excessively pleasant and you succumb to languor with a perfectly demoralized conscience. But it is languor (for me at least) languor perpetual and irresistible . . .”—another kind of “ostrich-like forgetfulness”—he, Henry, proposes (19 May 1973) “a few more notes of travel: for two reasons”:

1º that a few more joined with those already published and written will make a decent little volume; and 2º that now or never (I think) is my time. The keen love and observation of the picturesque is ebbing away from me as I grow older, and I doubt whether a year or two hence I shall have it in me to describe houses and mountains, or even cathedrals and pictures. I don’t know whether I shall do anything better, but I shall have been spoiled for this. The real, natural time,—if I could—would have been when I was abroad before. Mysterious and incontrollable (even to one’s self) is the growth of one’s mind. Little by little, I trust, my abilities will catch up with my ambitions.

So we continue, “weighing a preponderancy,” in love and out with the minor impertinent heft of it all . . .
Posted by John Latta at 7:34 AM